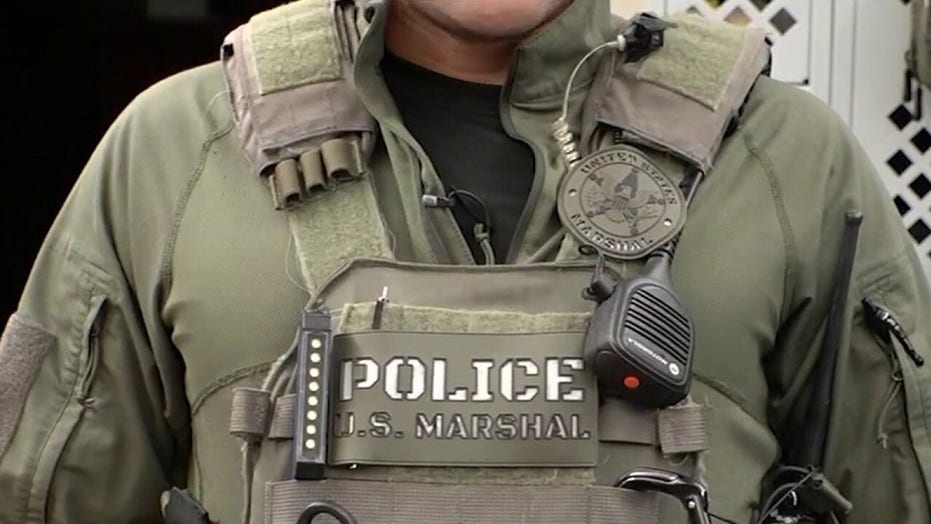 How federal agents are protecting courthouse in Portland

Fox News was given a behind the scenes look at the federal agents who are defending the building; national correspondent William La Jeunesse reports.

Portland on Tuesday witnessed its 62nd consecutive night of protests since the death of George Floyd – with hundreds of demonstrators once again gathering by a federal courthouse and some tossing fireworks – prompting federal officers to launch tear gas to cause them to disperse.

This conflict has become a routine occurrence, and several speakers and activists across the street at Lownsdale Park urged crowds not to engage with federal law enforcement because, by doing so, they argue it only further distracts from the Black Lives Matter movement.

WALL OF MOMS, DAD PODS, RIOT RIBS, PACIFIC NORTHWEST LIBERATION FRONT: SOME OF THE GROUPS THAT HAVE CONVERGED IN PORTLAND

People blocked vehicular traffic in the area for several hours. During this time, people in the crowd made speeches, yelled, chanted and banged on the fence surrounding the courthouse, according to a summary of events put together by the Portland Police Bureau. 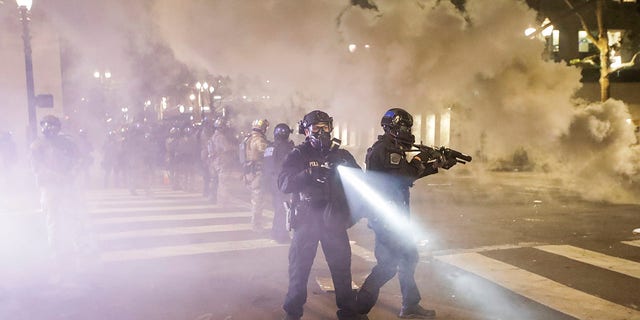 Federal officers at the courthouse periodically issued warnings to people not to damage the fence. After lightbulbs were tossed over and lights were shown at the building, federal officers deployed tear gas and used a hose to spray the sidewalk by the fence, stirring up chemical agents on the ground from nights before, The Oregonian reported.

That’s the same fence Portland Commissioner Chloe Eudaly said the city is fining the federal government $500 for every 15 minutes it blocks a bike lane on SW Third Avenue. Earlier Tuesday, Eudaly, who runs the city transportation bureau, said the bill was $192,000 and counting.

People in the crowd Tuesday night wore gas masks and helmets, and carried signs, hockey sticks, lacrosse sticks, umbrellas, leaf blowers and fireworks. Police said people started a fire inside the fence at about 10:45 p.m. and began shooting roman candles and other commercial-grade fireworks at the courthouse. People also threw rocks, bottles and other objects and climbed over the fence. A large fire was set where the Elk statue used to stand in the park across the street.

The crowd began being dispersed at about 1:38 a.m. Wednesday, police said.

Meanwhile, the Trump administration has started talks with the Oregon governor’s office and indicated that it would begin to draw down the presence of federal agents sent to quell two months of chaotic protests in Portland if the state stepped up its own enforcement, a senior White House official said Tuesday. 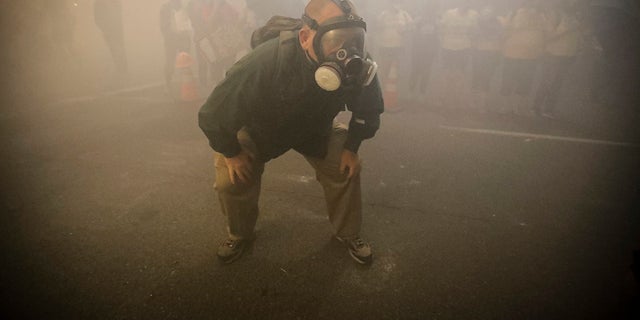 A demonstrator wears a gas mask as federal officers deploy tear gas during a Black Lives Matter protest at the Mark O. Hatfield United States Courthouse Monday in Portland, Ore. Several police agencies in Wisconsin have backed out of sending officers to next month’s Democratic National Convention in response to local orders preventing the use of tear gas to control crowds.
(AP)

The official stressed to the Associated Press that the talks with the office of Democrat Gov. Kate Brown are in the early stages and there is no agreement. The official was not authorized to publicly discuss private conversations and spoke on the condition of anonymity.

Just a day earlier, the U.S. Marshals Service and Department of Homeland Security were weighing whether to send in more agents. The marshals were taking steps to identify up to 100 additional personnel who could go in case they were needed to relieve or supplement the deputy marshals who work in Oregon, spokesman Drew Wade said. Homeland Security was considering a similar measure with Customs and Border Protection agents

The nightly protests in Portland have often spiraled into violence as demonstrators target the U.S. courthouse in Oregon's largest city with rocks, fireworks and laser pointers while federal agents respond with tear gas, less-lethal ammunition and arrests.

“We, as you know, have done an excellent job of watching over Portland and watching our courthouse where they wanted to burn it down, they’re anarchists, nothing short of anarchist agitators," Trump said Tuesday. "And we have protected it very powerfully. And if we didn’t go there, I will tell you, you wouldn’t have a courthouse. You’d have a billion-dollar burned-out building.”

The development came as the American Civil Liberties Union in Oregon filed a motion alleging that the militarized U.S. agents are attacking journalists and legal observers with riot-control munitions, despite a federal court ordering them to stop. It was filed after U.S. Attorney General William Barr on Tuesday defended the aggressive federal response to Congress, saying “violent rioters and anarchists have hijacked legitimate protests” sparked by Floyd’s death.