Passengers on a SriLankan Airlines flight are the first international arrivals to touch down at Melbourne Airport, as Victoria's hotel quarantine system resumes.

The state is welcoming international travellers for the first time since July 10 as it hopes to achieve 38 days in a row with no new COVID-19 cases.

Flight UL604 from Colombo landed just before 8am, and was the first of eight international passenger flights scheduled to arrive on Monday. 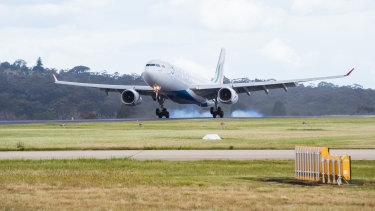 A SriLankan Airlines flight was the first international flight to arrive in Melbourne on Monday.

Monday marks a major milestone for Victoria, which suffered an extended hard lockdown, thousands of infections and more than 800 deaths as a result of a second COVID-19 wave that took hold after the virus escaped two Melbourne quarantine hotels.

Victoria will welcome 160 returned travellers each day as its hotel quarantine program resumes before quarantine hotel capacity is slowly increased.

The eight passenger flights will arrive from counties including Sri Lanka, Japan, Singapore, Qatar and the Philippines on Monday. Passengers arriving from Auckland will not need to quarantine under Australia's travel bubble arrangement with New Zealand.

Eleven airport and CBD hotels will participate in the second iteration of the quarantine program, including the Stamford Hotel, which was one of the hotels under scrutiny for virus leaks. Significantly, private security will not be involved in the revamped scheme, and testing protocols have been ramped up.

Hotel guests will have to pay about $3500 for their 14-day stay and fresh-air breaks and exercise will be banned to prevent movement inside hotels.

Those displaying COVID-19 symptoms will be shuttled from the airport tarmac, onto a bus and driven to one of two "hot hotels" – either the Holiday Inn on Flinders or Novotel South Wharf.

Australia's airport protocols were under scrutiny over the weekend after two German nationals were found to have skipped mandatory hotel quarantine in Sydney before boarding a domestic flight to Melbourne, potentially exposing nearly 200 people to the virus.

NSW police late on Sunday afternoon revealed an officer working his second shift at the airport allowed the 53-year-old woman and her 15-year-old to board the flight to Melbourne on Saturday afternoon, believing they had a quarantine exemption.

"We're not suggesting they lied, there was a language barrier, there were communication issues and the police officer has admitted the mistake that he didn't check the appropriate exemption forms and the paperwork appropriately," Mr Loy said.

The bungle has forced more than 170 unsuspecting passengers on the Sydney-Melbourne flight into self-isolation.

A Melbourne airport security guard who spotted the two confused German travellers near the SkyBus terminal raised the alarm about the bungle.

Premier Daniel Andrews praised the security guard for his quick thinking and placed blame for the breach squarely with authorities in Sydney.

"All we can do is work together as closely as possible to make sure that something like this doesn't happen again and I'm really confident we'll be able to do that," he said

The mother and son returned a negative coronavirus test on Saturday, and health authorities will test the pair again on Monday and on day 11 of their 14-day quarantine on December 16.

Those on the flight with them, along with five Melbourne Airport staff who were identified as close contacts, must remain in isolation until the travellers returned a second negative test.

Stay across the news you need to know related to the pandemic. Sent Monday and Thursday. Sign up here.