Home » World News » Florida deputies save man about to jump off bridge after he almost runs over deputy, sheriff says

Florida deputies save man about to jump off bridge after he almost runs over deputy, sheriff says 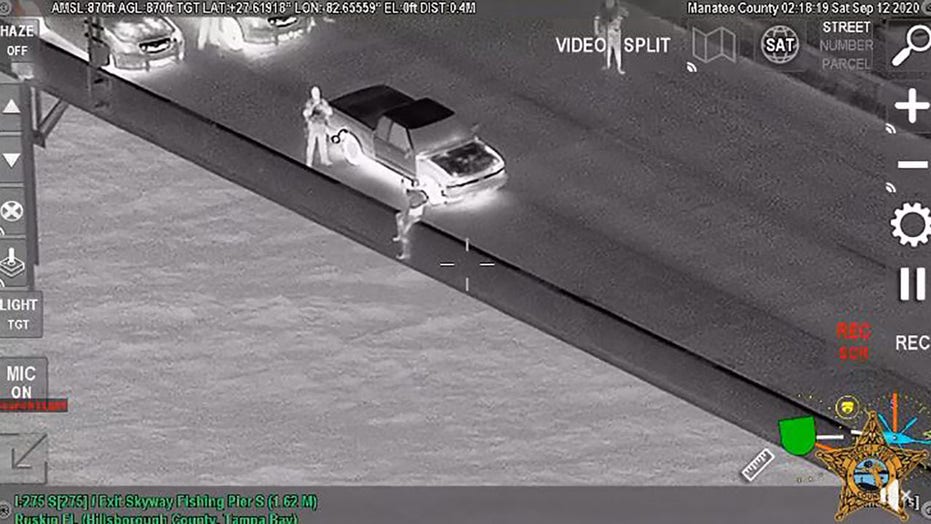 Florida deputies rescued a man threatening to jump off a bridge after he tried to run over a deputy during a traffic stop over the weekend, authorities said.

The incident happened after Manatee County Sheriff’s Deputy Jacob Merrill noticed a driver swerving on a roadway just before 2 a.m. on Saturday.

Merrill told reporters Wednesday that when he tried to pull the vehicle over, the driver refused to stop. The driver eventually pulled over after a short pursuit, but twice tried to run over Merrill after the deputy exited his car to conduct a traffic stop.

"At that moment, I’m not going to lie, there’s fear that runs through, you’re afraid for your life at that point,” Merrill said.

After the driver sped away, Merrill was able to radio deputies for backup.

Chopper video released by the sheriff's office shows deputies pursuing the pickup truck onto the peak of the Sunshine Skyway Bridge, where the vehicle stopped after its tires were blown out.

The driver is seen exiting the truck and climbing the barrier wall. He sits on the wall and dangles both of his feet off the edge.

Deputies said in that moment the situation changed dramatically from a highway pursuit to a life-saving effort. 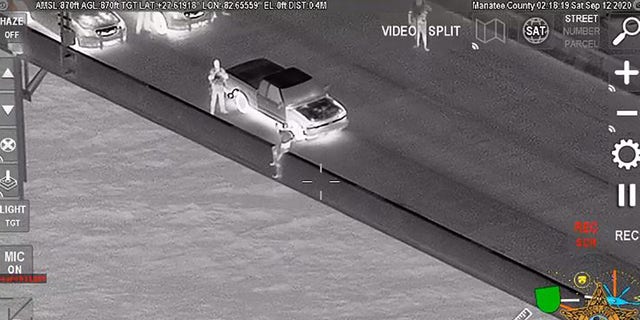 Jones speaks with the driver to keep him calm and distracted on the Sunshine Skyway Bridge.
(Manatee County Sheriff’s Office)

"Initially it was, ‘We need to arrest this guy,’ but when he threw his legs over the bridge, it went from an arrest to stopping him from jumping off the bridge," said Detective John Jones.

Jones said he spoke with the driver, who said he wouldn’t go back to jail, and tried to keep him calm and distracted until other deputies could make their move to pull him down from the wall.

Detective Tyler Ackerman was one of the two deputies who made their way behind the driver as Jones talked to him. Ackerman said the thought crossed his mind that if he didn’t go about the rescue in the right way, it could have ended in tragedy for the driver and even the deputy himself.

“I just got as low as I could, wrapped my arms around him and tried to make my hands touch, and just pulled him off the barrier,” he said. 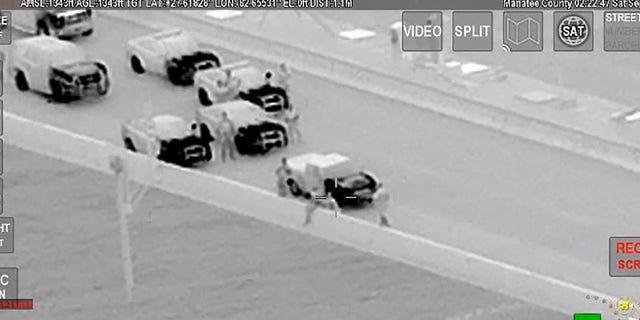 Ackerman and a second deputy made their way behind the driver and pulled him down while he was speaking to Jones.
(Manatee County Sheriff’s Office)

Once pulled back from the edge, the driver put up a short fight as other deputies rushed to help make the arrest.

“When you get into a situation now where you have to calm everything down and save a man from jumping off a bridge and committing suicide, that takes a lot of training and it’s not easy,” Wells said. “Everything they did was exceptional, heroic and I'm so proud of them."

The driver, later identified as 23-year-old Scott Rapson, was arrested and held at the Hillsborough County Jail. He was charged with aggravated assault on a law enforcement officer, DUI, and fleeing to elude.