Former church goes on the market for £21.5m on it

Holy smoke, that’s a conversion! Former church goes on the market… but if your prayers were answered, would YOU spend £21.5m on it?

Estate agents are not easily given to understatement. And so it proves as Toby Downes, a 30-something Savills negotiator charged with selling a church conversion in London’s affluent Chelsea, says: ‘We’re looking for a visionary buyer, frankly.’

Yes, indeed. And this particular visionary will need to come up with £19.5million — plus a further £2million or so if you throw in the art, furniture, rugs and assorted knick-knacks — which gets you a five-bedroom des-res within a goalkeeper’s punt of Stamford Bridge, home to Chelsea Football Club.

Come to think of it, Grade II-listed St Mark’s could be just the job for a footballer and his wife and children, all of whom will revel in the recreational diversions of the building — some of which might just have Edward Blore, the distinguished architect commissioned to design the church in 1841, rotating in his mausoleum.

There’s a 15-metre (50 ft) heated swimming pool in the basement, along with a state-of-the-art gym. 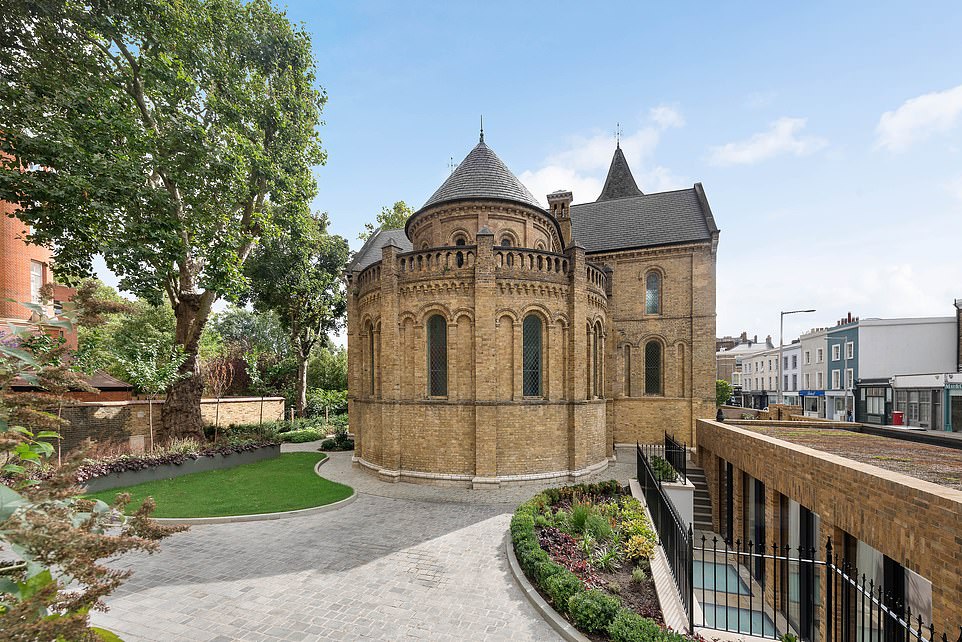 Grade II listed St Mark’s chapel in in Chelsea is on the market for at least £19.5million. While it dates back to the 19th century, inside it offers a very modern interior, complete with a heated swimming pool and cinema 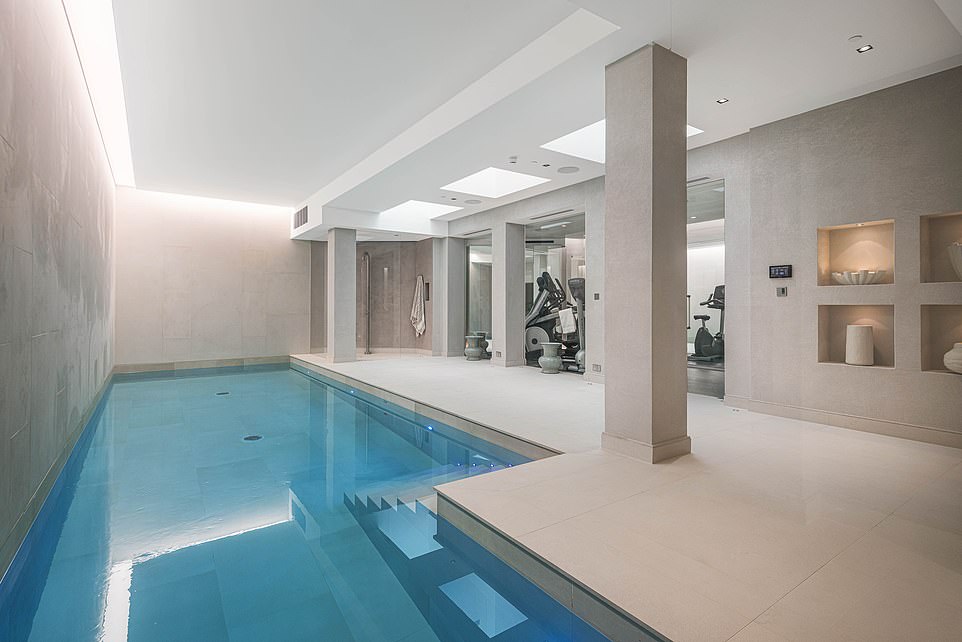 The heated swimming pool is in the basement of the former church, with an adjoining gym and massage suite already built in

The ‘massage suite’ comes with its own subterranean bathroom and, on the lower-ground floor, there’s a cinema (screen measuring 100 in (2.5 metre) wide), a fully-stocked bar — with fridges, cocktail shakers, champagne flutes — plus media centre and games room with full-size snooker table.

The bell tower, which once rang out to summon the faithful to worship, is now home to a lift that stops at five floors, and the choir stall — at the end of which the altar stood — has been turned into a suspended reception room featuring a large, square, parchment coffee table with polished bronze apertures.

You’ve got 7,400 sq ft to play with inside while, outside, you sweep through the electric gates, park securely on the paved forecourt and admire the aspiring hellebores and climbing roses while, presumably, a member of staff appears with a brolly or empties the boot. 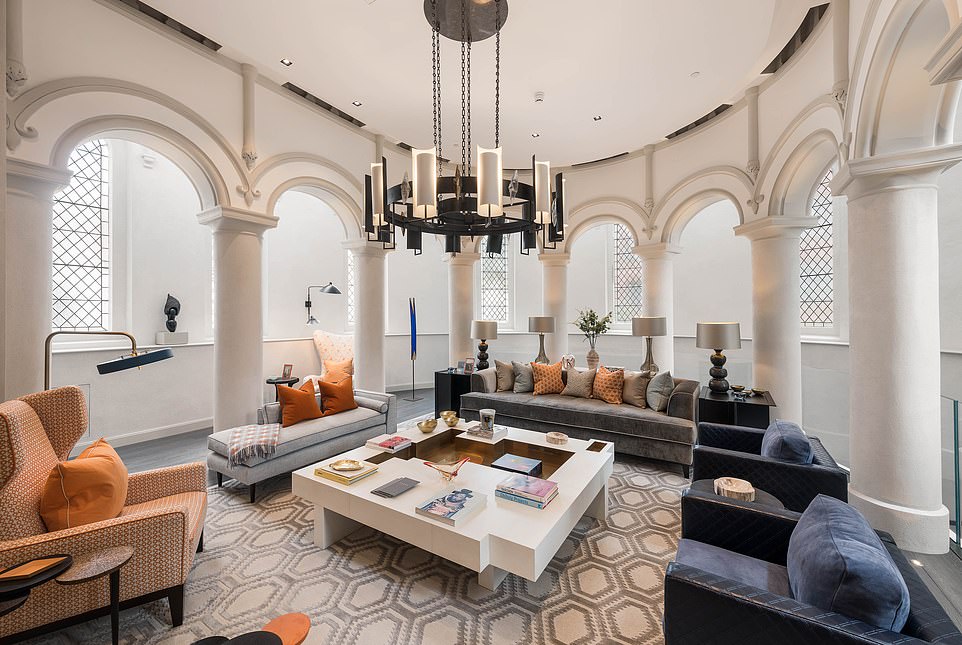 The converted church is up for sale for £19.5million, plus a further £2 million or so if you throw in the art, furniture, rugs and assorted knick-knacks 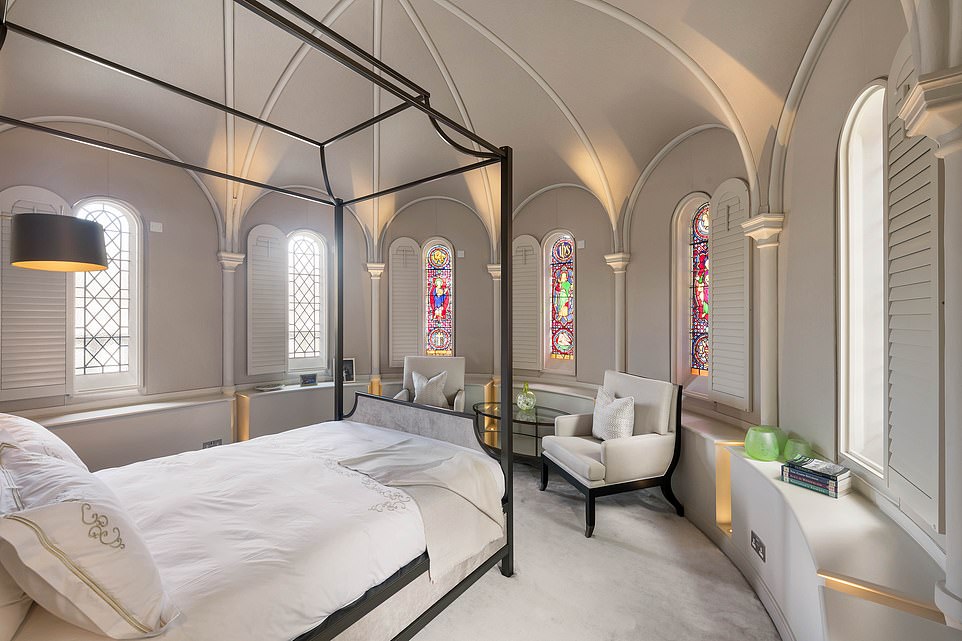 The house boasts five bedrooms, with stain-glassed windows and vaulted ceilings. The former chapel’s bell tower has been converted to accommodate a lift that arrives at all five floors. The master bedroom also has a his-and-hers dressing room double the size of most people’s living rooms

‘Bring your toothbrush and move in,’ says Brian D’Arcy Clark, who bought the church on behalf of Savills’ Residential Acquisitions department in 2012 before embarking on a protracted period of negotiations with Kensington and Chelsea borough council’s planning authorities.

Indeed, not withstanding the price, it would be nice to move in just with one’s toothbrush — but it would bother me that none of the windows can be opened.

These gizmos also take charge of the lights and heating, open and close the front gates and operate the spy cameras.

Mind you, you’d have to be over-picky not to love the top-floor master suite, which has a his-and-hers dressing room double the size of most people’s living rooms, the church windows still in place.

The south-facing bathroom has a huge, round, quartz and limestone bath costing £3,700 and a circular glass shower, while the kitchen has a double-door Gaggenau fridge-freezer, Bora cooking range and Ashford marble worktop.

All the interiors, including the furniture, books, crockery, cooking utensils, lotions and potions have been overseen by Thorp Design, which recently revamped Wentworth Golf Club, including its spa. 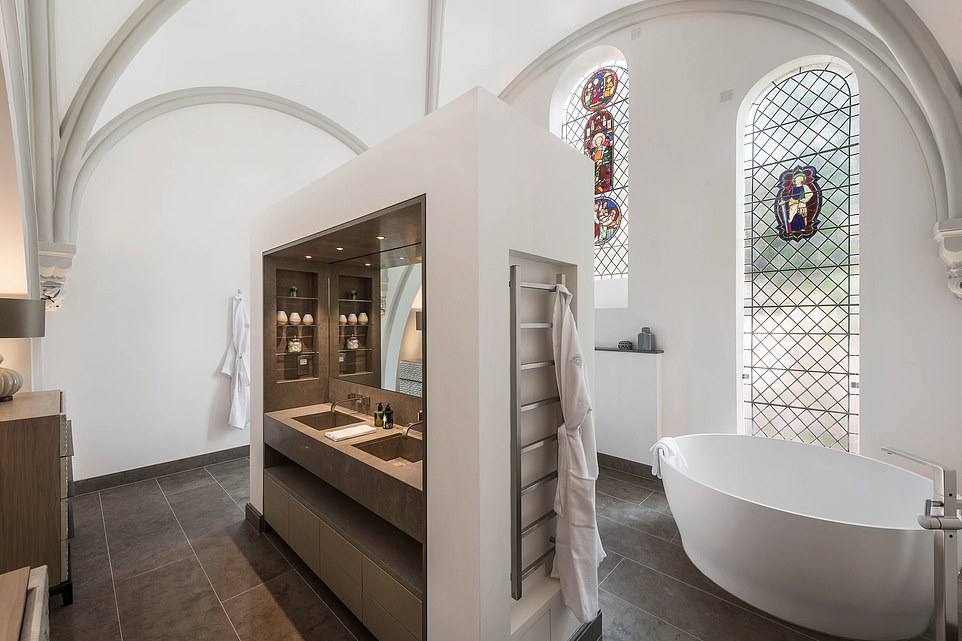 Given its history, none of the former chapel’s windows can be open, instead the house relies on a sophisticated ‘comfort cooling system’ controlled via wall-mounted tablet devices dotted around the ‘smart house’ 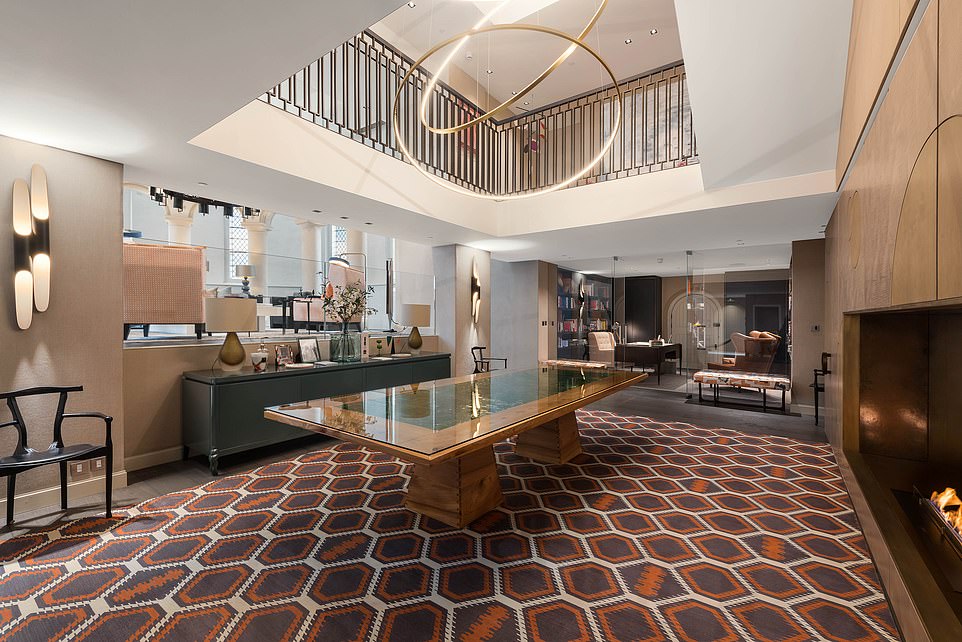 The devices take charge of the lights and heating, open and close the front gates and operate the spy cameras inside the home, which is just a short walk from Chelsea FC’s ground, Stamford Bridge

‘The furniture is an art form in itself,’ says director Philippa Thorp. ‘Everything has been made bespoke and I would be surprised if a buyer did not want to acquire most of the contents.

They are one-off pieces.’ Acquiring the paintings will require a separate negotiation.

Which means a hefty sum for Sir Terry Frost’s 1998 Madron Woodcuts and for works by June Collier, Michael Vaughan and Timur D’Vatz.

But the main chandelier, made by Le Deun in Paris, is included in the price.

The church, built in a Neoclassical or Romanesque style using Suffolk brick, sits on London’s Fulham Road and is, somewhat unfortunately, now overlooked by a new-build block of flats.

It was originally designed to serve as the chapel of teacher-training institution the College of St Mark run by the Rev Derwent Coleridge, son of the poet Samuel Taylor Coleridge. 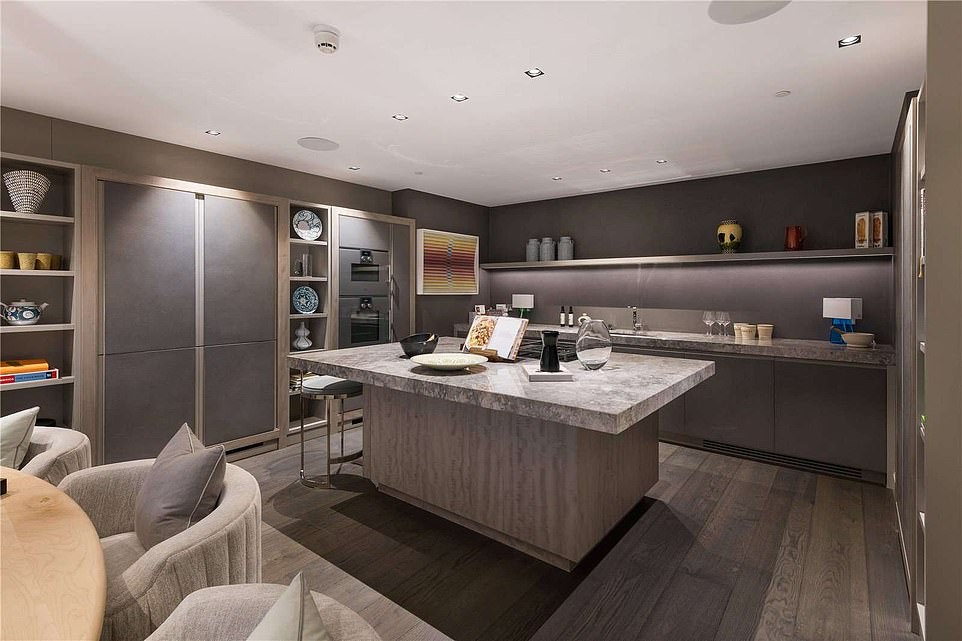 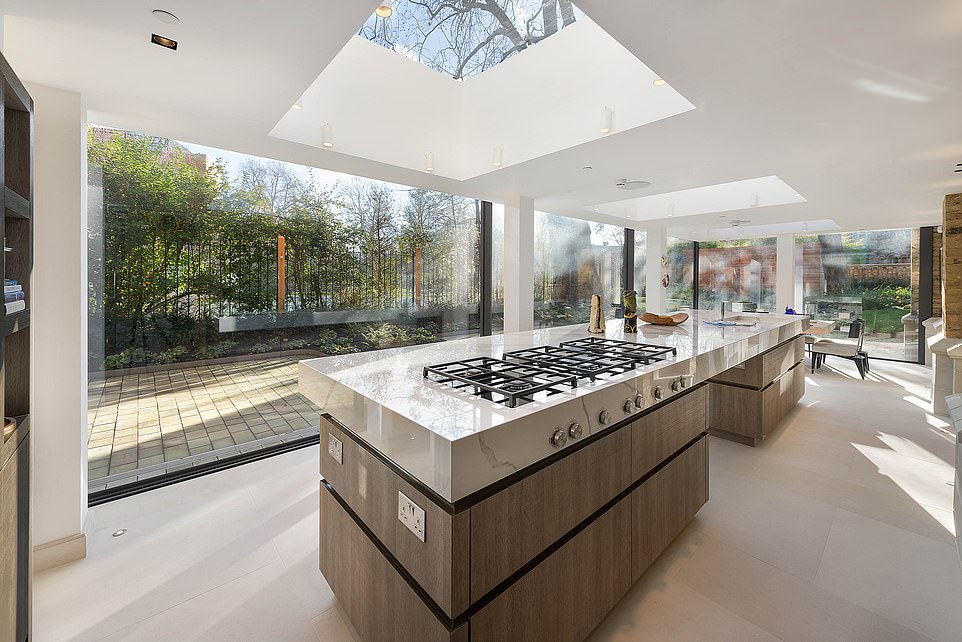 But when the college moved to Plymouth in the 1970s, the church was deconsecrated and, in the intervening years, has been put to a number of different uses, including a period as a film studio.

Mr Downes says there has been ‘genuine interest’ from potential buyers, among them ‘a few Indians, Chinese and one or two English aristos’.

The church has, in fact, been divided into two houses. In addition to St Mark’s, there is the smaller St John’s next door occupying much of the nave, with a price tag of £15 million.

This throws up the possibility of a buyer snapping up both houses and embarking on the ultimate knock-through for just shy of £35 million. Mr Downes can only pray.