France registered an increase of daily coronavirus deaths of 544 today as the number of patients in hospital with the disease fell.

The French government has recorded a total of 21,340 deaths from coronavirus infections, the fourth-highest casualty tally in the world.

Despite today’s rise in fatalities of 2.6 per cent, France is still trailing just a few hundred behind Spain, which has a death toll of 21,717. 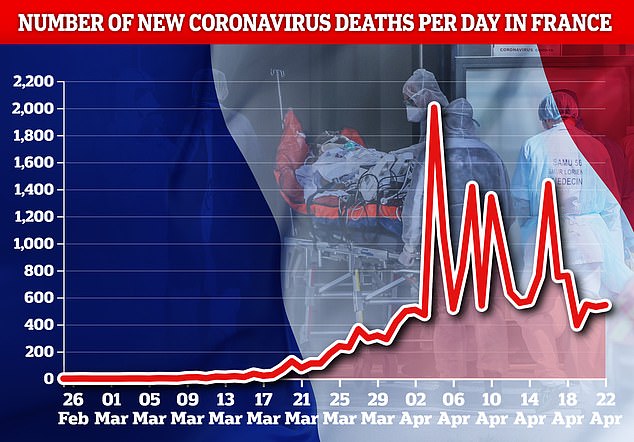 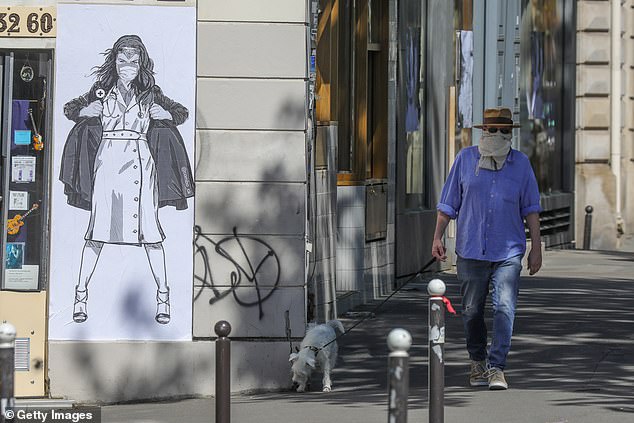 The number of patients in intensive care units – the most important metric of a health system’s ability to deal with the epidemic – fell by 215 or 4 per cent to 5,218, the 14th consecutive decline.

Health official Jerome Salomon told reporters that despite signs of improving trends in the data, the spread of the virus in France ‘remains at a high level and we need to respect the confinement’.

These new statistics came as it was revealed France could have as many as 2,441 extra unreported virus deaths. 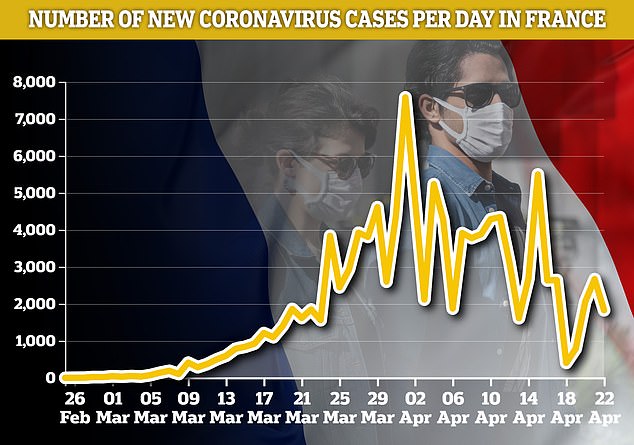 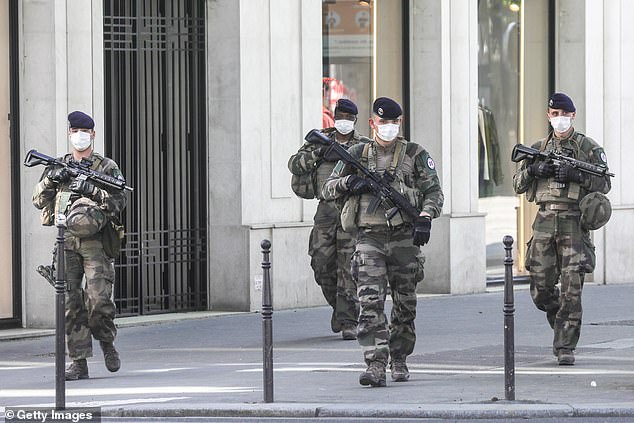 Between March 9 and April 5 there were 10,500 more deaths reported in France than is usual at that time of year – only 8,059 of which were logged as coronavirus deaths.

That leaves an excess of 2,441 deaths that might have been caused by the illness but were not included in the official tally.

Today France, alongside the Netherlands, became the latest European countries planning to re-open schools after a weeks-long break due to the coronavirus lockdown.

French primary school children are due to return to school on May 11 with a maximum of around 15 children per class.

Older children will return a week later on May 18, but schools will only be allowed to resume if they meet strict health conditions.

President Emmanuel Macron says it is important to restart school as soon as possible for children in low-income families.

French universities will remain closed until after the summer break.

Over the last days France has been abuzz with speculation over how the so-called ‘de-confinement’ will proceed on May 11, with the government yet to unveil its concrete plan.

According to Macron, schools could gradually reopen then but cafes, cinemas and cultural venues would remain closed.

The president is due to hold a video conference on Friday with representatives of the tourism and restaurant sector and there has been speculation that bars and restaurants could be allowed to open from June 15.

But government spokeswoman Sibeth Ndiaye said she could not confirm this, adding that more time was needed ‘to work out the different scenarios for resuming activity’.