From the Archives, 1942: Air war intensifies over Northern Australia 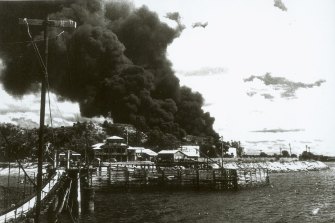 CANBERRA, Sunday – Enemy raids today on Katherine, about 180 miles inland from Darwin, and on Darwin are reported in a communique issued by the Prime Minister (Mr. Curtin) late tonight.

The communique also records a highly successful attack by Allied planes on Japanese planes and troops at Lae (New Guinea), in which at least 13 enemy planes were destroyed and several others damaged, for the loss of two of our planes.

More successful raids were also made on Rabaul and on Koepang, following the attack on Rabaul on Friday, in which two enemy cruisers were hit.

The communique reads:–“Early today, Allied aircraft made a heavy attack on grounded enemy aircraft at Lae (New Guinea). Three Japanese bombers and nine fighters were left in flames and two bombers and three fighters were damaged. Despite anti-aircraft fire and interception by enemy fighters, the attack was pressed home with considerable success, bombs being dropped in the target area, and grounded aircraft attacked with machine-gun fire.

“An enemy standing patrol of three Zero fighters dived on our aircraft over Lae, but were driven off. A burst of 500 rounds fired by one of our aircraft was seen to enter one of the Zero fighters. Its destruction, however, cannot be confirmed. Japanese troops and airmen who ran for shelter when our aircraft appeared were also attacked. 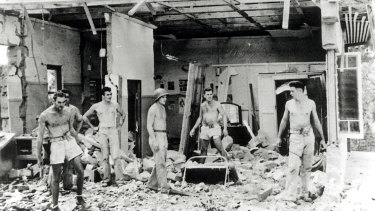 Troops inspect the remains of a building following a raid on Darwin in February, 1942.Credit:State Library of the Northern Territory

“Enemy fighters attempted to intercept our bombers, but one of the attacking aircraft was shot down into the sea, after it had received a burst of 1000 rounds. One other enemy fighter was damaged. In this encounter two members of the crew of one of our bombers were wounded.

“Following the sinking of a heavy enemy cruiser at Rabaul, reported in yesterday’s communique, another raid was made on the harbor and aerodrome there. Bombs fell in the target area. Enemy fighters attempted interception, but failed, losing probably two fighters.

“Koepang was again raided by our bombers yesterday, the aerodrome and the town being the principal targets. Again all our bombs fell in the target area. While over Koepang, our aircraft were unsuccessfully attacked by enemy fighters. From all these operations two of our aircraft failed to return.

“Enemy aircraft attacked Katherine (N.T.) this afternoon. Bombs were dropped, killing one and injuring another. Little damage was done during this raid.

“This morning Darwin was again raided, making its sixth raid. No bombs fell on military targets, and no damage or casualties have been reported. One enemy aircraft is reported to have been shot down.

“Enemy reconnaissance of the Papua area continued over the weekend.”

Unidentified planes have been reported over Townsville in the last two days. Single planes flew high over the city about midday today and yesterday.

Broome and Derby, on the north-west coast of Australia, were raided by Japanese aircraft on Friday. The attack on Derby was the first carried out by the enemy on this town.

The Prime Minister (Mr. Curtin) announced on Saturday that one civilian was killed by bombs at Broome, but there were no casualties at Derby, where cannon-firing fighters swept the town at low level.

Meanwhile Allied aircraft continue the smashing offensive against Japanese lines of communication, which began ten days ago. An enemy cruiser was set on fire and probably sunk in Rabaul harbor after Allied bombers had run the gantlet of heavy anti-aircraft fire and attack by fighters. Another cruiser was seriously damaged.

The R.A.A.F. carried out a raid on enemy installations on the island of Yamdena, about 300 miles north of Australia.

The communique said: “Allied aircraft carried out a successful operation against enemy war ships at Rabaul yesterday. It is reported that a Japanese heavy cruiser was set on fire and sunk.

“The attack was made in daylight in the face of heavy anti-aircraft fire from the ground and from ships in the harbor. Operating from a great height, Allied aircraft directed their attack on a heavy cruiser. The first bombs dropped from 27,000 feet recorded several near misses, close to bow and stern of the cruiser. Enemy fighters then engaged the Allied bombers. Two attacks were driven off, and one enemy Zero fighter was seen to dive steeply. Despite these attacks, further bombs were dropped and a direct hit and several more near misses were seen.

“Columns of black smoke issued from the cruiser, and as the bombers left the target she was reported to be burning and sinking. Further attacks by Japanese fighters followed this success. One Allied bomber, though hampered by engine trouble, drove off numerous enemy attacks. All our bombers returned to their bases.”

In a further assessment of the raid later yesterday, the Prime Minister said: “Two cruisers were seriously damaged, one being probably sunk, in yesterday’s successful Allied attack on enemy war ships at Rabaul. Enemy reconnaissance of New Guinea and Papua areas was continual early this morning. A Japanese heavy bomber over Port Moresby was driven off by anti-aircraft fire.

“R.A.A.F. aircraft, operating from bases in the Northam Territory on Friday afternoon, raided Saumliki, on the island of Yamdena, about 300 miles to the north of Australia. Enemy installations there were bombed, but results were not fully observed.

“Japanese reconnaissances and attacks on Friday covered the north-western coast of Australia, raids being made on Broome and Derby. Following a reconnaissance of Broome during the morning a medium force of enemy bombers and fighters attacked about an hour later. The raid was short and was directed at an aerodrome. About 50 bombs were dropped. One civilian was killed and some damage done to civil aircraft. Later one fighter machine-gunned the aerodrome without success. “Derby was also attacked about the same time by two Japanese aircraft with machine gun and cannon fire from a low level. Three runs were made over the target. There was no damage and no casualties resulted.

“A small vessel near Darwin was attacked by an enemy fighter on Friday. About 500 shots were fired, but no hit was made.

“It is now confirmed that casualties in the raid on Darwin last Thursday were two killed and seven wounded.”