A FURIOUS woman has written a seething note to her randy neighbours who have been keeping her awake with their deafening “sexcapades.”

The message from the fed-up resident in Brisbane told the new tenants next door that “the walls are paper thin” – meaning she can hear all their “moaning and groaning” during their romps. 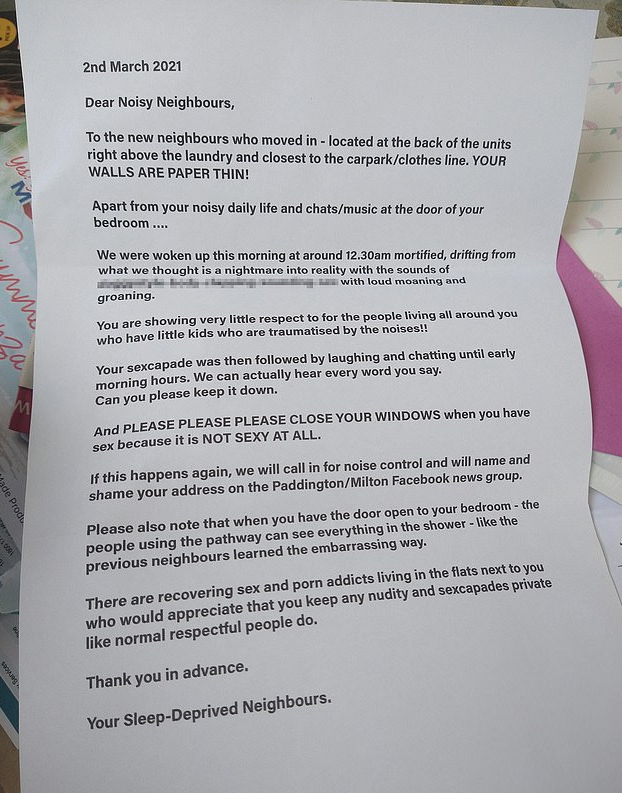 The letter, which has some details too graphic to publish, quickly went viral after being shared on Reddit.

It reads: “We were woken up this morning at around 12.30am mortified, drifting from what we thought was a nightmare into reality with the sounds of… loud moaning and groaning.

"You are showing very little respect for the people living all around you who have little kids who are traumatised by the noise!!

“Your sexcapade was then followed by laughing and chatting until very early morning hours.

“We can actually hear every word you say. Can you please keep it down?

“And PLEASE PLEASE close your windows when you have sex because IT IS NOT SEXY AT ALL.

“If this happens again, we will call in for noise control and will name and shame your address on the Paddington/Milton Facebook news group.”

One of the neighbours has now said that she would have preferred a more polite message and dubbed it’s author a “karen”.

They wrote: “Like in all honesty, as funny as the encouragement to just be even louder is – I don't actually want to disturb my neighbours' sleep and I don't particularly want them to hear me having sex.

“So of course I'm going to try and keep it down and shut my goddamn windows.

“Just don't be a d**k about in next time… But also thanks for the meme, Karen.”

The post on Reddit received over 300 comments with some siding with the randy neighbours saying that “Karen should lighten up.”

But some took the authors' side, blasting the new tenants as inconsiderate.