Alex Salmond was blasted today after downplaying global political interference by Vladimir Putin – while continuing to host a programme on a Russian-controlled television station.

Scotland’s former first minister refused to outright condemn the autocratic leader over claims he interfered in US elections and the 2014 Scottish independence referendum.

And in a heated radio exchange he also refused to blame Mr Putin for the 2018 nerve agent poisoning in Salisbury that left a woman dead and four others – including a police officer – seriously injured.

The Alba Party leader, who is hoping to win a Holyrood seat in May’s elections as a launchpad for independence, has hosted The Alex Salmond Show on RT since 2017.

In relation to his programme he was grilled on BBC Good Morning Scotland today on the actions of Mr Putin.

Asked about claims that Russia was involved in attempting to steer the result of the 2014 referendum, he said: ‘Anyone who analysed the evidence that was suggested would think it laughable in my opinion.’ 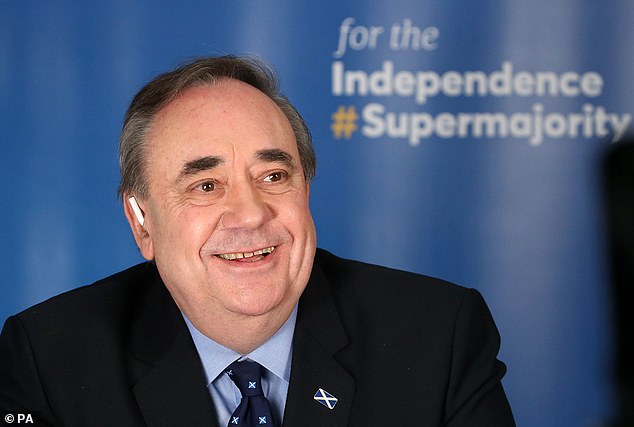 Scotland’s former first minister refused to outright condemn the autocratic leader over claims he interfered in US elections and the 2014 Scottish independence referendum. 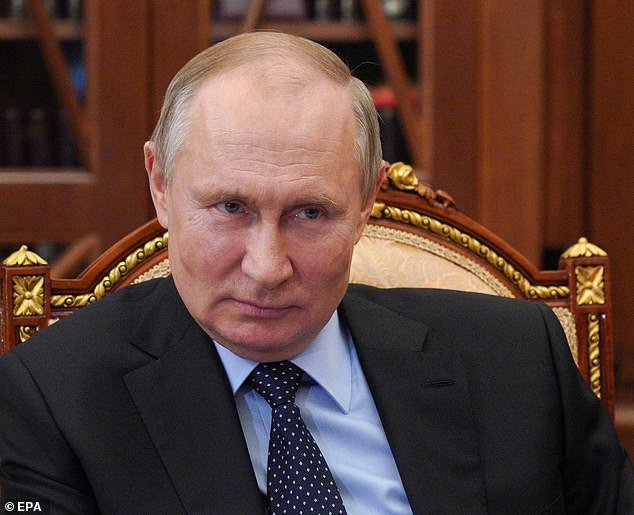 And in a heated radio exchange he also refused to blame Mr Putin for the 2018 nerve agent poisoning in Salisbury that left a woman dead and four others – including a police officer – seriously injured. 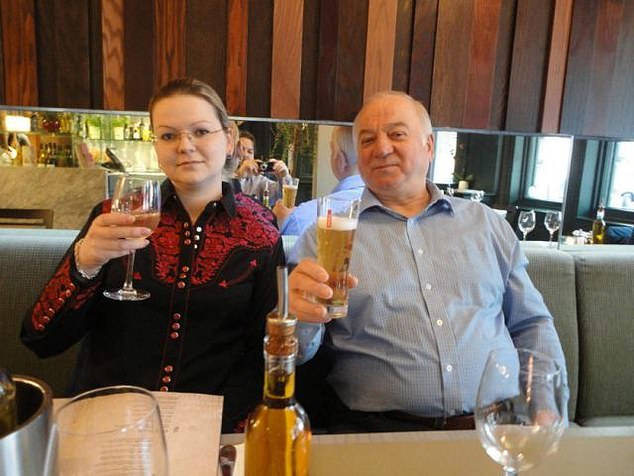 Mr Salmond today also clashed with GMS host Gary Robertson over the Salisbury poisoning, when asked three times if he believed Mr Putin was behind the attempt on the life of Sergei Skripal and his daughter Yulia (pictured)

Ex-labour MP George Galloway is taking legal action after his All for Unity party was excluded from the latest TV debate of the Scottish election campaign.

The former MP hit out at broadcaster STV for what he branded a ‘blatantly unlawful decision’.

As well as being excluded from next week’s TV debate – which will feature the leaders of the five parties currently represented at Holyrood – Mr Galloway complained the channel was doing a one-to-one interview with Alex Salmond, the former Scottish first minister whose new Alba Party is running only on the regional list, as All for Unity is.

Announcing the move on Twitter, Mr Galloway said that the broadcaster, which he dubbed ‘SNPTV’, would now ‘face us in court’.

Linda Grimes Douglas, head of news and current affairs at STV, said: ‘It’s a hugely exciting time for Scottish politics and our team is primed and ready to bring viewers the most comprehensive coverage of Election 2021.

‘From our leaders’ debate and one-to-ones on Scotland Tonight, to analysis and on-the-night updates as part of special programming – alongside fully comprehensive ongoing updates from across the country on STV News At Six – we’ve got it covered.’

‘Alex Salmond may not have seen the relevance of being questioned about his links with Russia but voters will be astonished at his continued lack of moral judgement.

‘Scotland deserves better than the former First Minister and his backers pursuing their separatist dream immediately after the election if they achieve a super-majority for independence.’

MPs and peers on the Intelligence and Security Committee (ISC) carried out an investigation into the threats Moscow poses to Britain.

It found that the Russian attempts to influence the 2014 referendum were ‘the first post-Soviet interference in a Western democratic election’.

The 50-page report was the result of an 18-month investigation by the former Intelligence and Security Committee, chaired by former Attorney General Dominic Grieve.

Mr Salmond today also  clashed with GMS host Gary Robertson over the Salisbury poisoning, when asked three times if he believed Mr Putin was behind the attempt on the life of Sergei Skripal and his daughter Yulia.

A pair of Russian assassins travelled to Salisbury in March 2018 in an attempt to kill former spy turned double agent Mr Skripal with military-grade nerve gas.

While they survived the assassination attempt, local woman Dawn Sturgess died after coming into contact with a perfume bottle used to carry the Novichok.

The attack sparked global outrage and a string of diplomatic reprisals against Russia.

But asked about the case today, Mr Salmond told GMS: ‘The evidence was presented at the time and I’m struggling to understand what this has to do with a Scottish election campaign.

‘It’s perfectly legitimate for you to ask me about the programme I produce, along with others for broadcast on RT.’

Asked about the widely held belief that he interfered in the 2016 election to help elect Donald Trump, Mr Salmond said: I thought the evidence for that was very slight.’

Launching his new Alba Party’s election campaign today the former SNP First Minister said that discussions with Westminster should begin in ‘week one’ of the new assembly.

A poll at the weekend suggested pro-independence parties are on course to win 79 of the 129 seats available on May 6.

With a swipe at Boris Johnson’s refusal to allow a new referendum, Mr Salmond said: ‘The Tory Prime Minister must not be allowed to cast this great debate as party against party, Prime Minister against First Minister. If he does that, Scotland will lose.

‘This needs to become what we all know it to be – a Tory Prime Minister standing against the will of Scotland’s Parliament representing Scotland’s people.

‘Boris Johnson has already declared he will ignore an SNP victory as a basis for a referendum. But even if he can ignore a party, he cannot ignore a Parliament and a nation.’

Current SNP policy is to hold a referendum, with or without consent from the UK Government, if an independence majority is elected on May 6. However, the party has said any referendum, which could be challenged in the courts by Westminster, would only take place after the pandemic is over.

The Alba Party leader made what he called the ‘declaration for Scotland’, on the 701st anniversary of the 1320 Declaration of Arbroath, in which Scottish leaders including Robert the Bruce vowed not to be subjugated by England.