A Georgia judge has denied bail for the father and son charged with killing Ahmaud Arbery, according to reports.

Superior Court Judge Timothy Walmsley heard arguments for two days as to whether or not Gregory and Travis McMichael should be released on bail.

Ultimately, Walmsley determined that the McMichaels posed “a significant risk and danger to the community,” according to KTLA 5.

The father and son previously claimed they pursued Arbery because they thought he was breaking into a house, after which Travis McMichael claimed he shot Arbery in self-defense. Prosecutors have said Arbery was simply out for a jog. 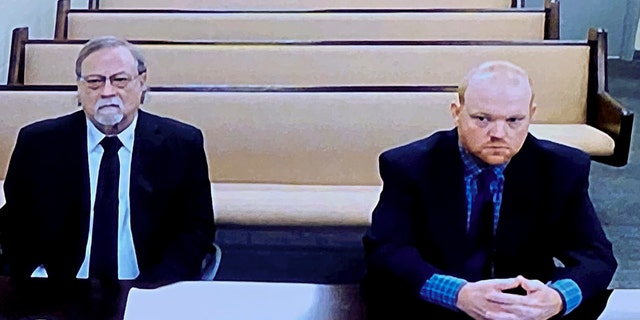 In this image made from video, from left, father and son, Gregory and Travis McMichael, accused in the shooting death of Ahmaud Arbery in Georgia on Feb. 2020, listen via closed circuit tv in the Glynn County Detention center in Brunswick, Ga., on Thursday, Nov. 12, as lawyers argue for bond to be set at the Glynn County courthouse. The McMichaels chased and fatally shot Ahmaud Arbery, a 25-year-old Black man, after they spotted him running in their neighborhood just outside the port city of Brunswick.(AP Photo/Lewis Levine)

The McMichaels weren’t arrested until the cellphone video of the shooting was posted online.

Walmsley agreed with prosecutors that Gregory McMichael appeared “willing to place the law in his own hands,” even going so far as to trying to influence investigators after the shooting.

Attorneys introduced new evidence, including text messages from Travis McMichael, body cam footage that appeared to show Gregory McMichael telling police about his past as a former law enforcement officer and providing false information to the officers.

“Possibly it’s one of the reasons this case took so long to get where it is right now,” Walmsley said, referring to the apparent two-month delay between the shooting and the arrests.

Robert Rubin and Jason Sheffield, attorneys for Travis McMichael, attempted to portray their client as a person of character, citing his service as a U.S. Coast Guard machine technician and his 3-year-old son, according to Fox 5 Atlanta.

“In no way, shape or form is Travis hateful towards any group of people, nor does he look down on anyone based on race, religion or beliefs,” Curt Hall, a former Coast Guard roommate of Travis McMichael who described himself as “multiracial,” wrote in a letter supporting bond for his friend.

Testimony on Thursday ran counter to that image, with prosecutors pointing to Facebook comments by Travis McMichael in which he seems to freely use racial slurs, as well as text messages with racially-charged language.