Germany relaxes more coronavirus restrictions with gyms, cafes and PUBS allowed to reopen in some places despite rate of infection climbing above 1

While the new regulations vary from state to state, most Germans will be allowed to meet with people from outside their households starting today with more pupils allowed to return to school.

The moves come despite warnings over the country’s ‘R’ figure – or rate of infection – which stood around 1.1 on Sunday, according to the Robert Koch Institute.

Anything over 1 means the number of new infections is increasing and the outbreak is in danger of spiralling out of control. 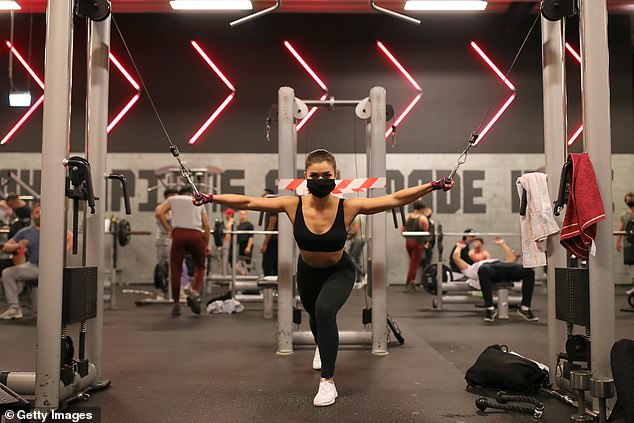 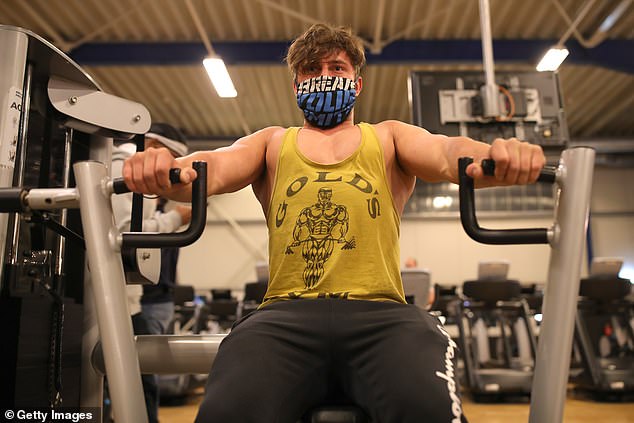 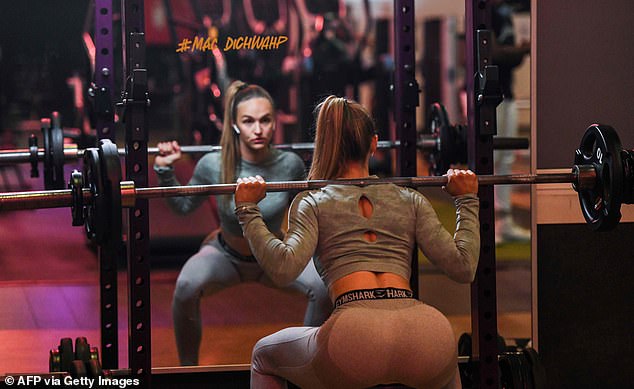 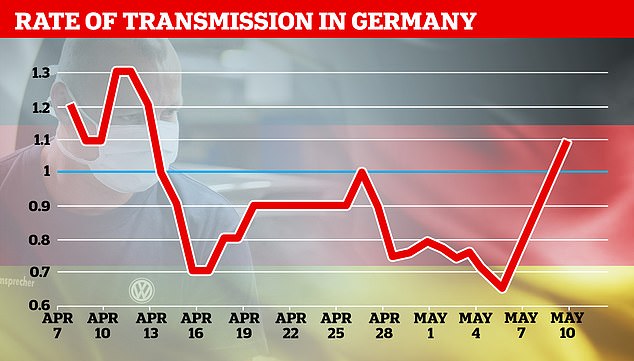 Germany has kept is R figure below 1 since mid-April, leading to a huge fall in daily case numbers, but it is now rising again

Researchers warned that their calculations are not exact, and that the figure needs to be watched carefully over the coming days.

In order to try and keep the rate down, testing firm Centogene said it will be giving pupils at one school in Neustrelitz, in the coutnry’s north, a virus test twice per week.

Results will be provided the same afternoon, allowing them to quickly detect if a child is infected. They claim this will allow children to be taught in normal-sized classes, and hope the scheme could be used country-wide.

Despite fears over the R rate, Germany reported just 357 new cases on Monday along with 22 new deaths – its lowest figures in two months.

However, data usually shows a steep drop on Monday due to a backlog from the weekend that does not clear until later in the week.

Residents of Berlin – where the Robert Koch Institute is located – were also given a day off on Friday for VE-Day, which may have exacerbated the problem.

Germany is not alone in easing lockdown restrictions this week.

Spain, France Belgium and the UK – Europe’s worst-hit country – all announced that restrictions would be eased starting Monday morning.

Shops and schools were allowed to reopen across much of France, though there were fears of a rise in infections after crowds were pictured at train stations and on underground metro platforms. 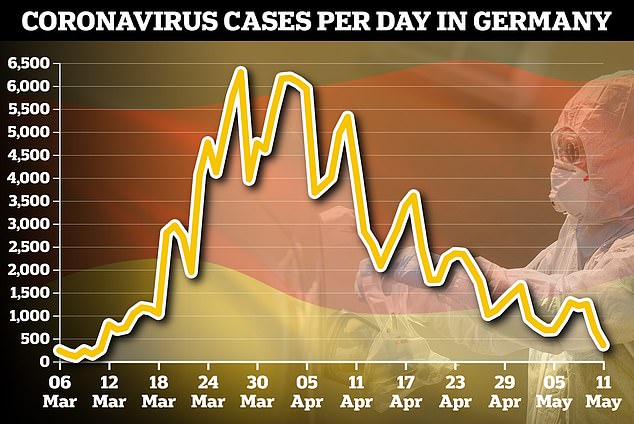 Germany reported just 357 new cases of coronavirus on Monday, though there are fears it will start climbing again after the R number increased 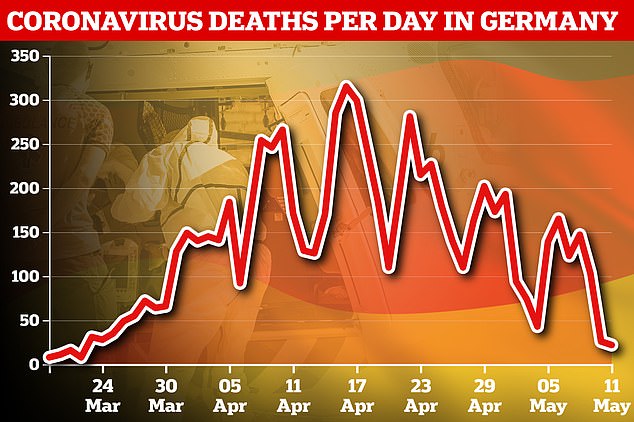 Germany also reported just 22 new deaths from the virus on Monday, though totals are usually lowest at the start of the week due to a reporting backlog from the weekend

In Spain, around half of the country’s 47million people were allowed out of strict confinement measures on Monday.

Those lucky enough to live in areas deemed low risk were allowed to leave their homes, socialise in small groups, and use outdoor seating areas in restaurants and cafes starting on Monday morning.

However, for those living in the hard-hit capital Madrid and economic powerhouse of Barcelona, strict confinement measures remain in place.

Meanwhile in the UK, a once-per-day limit on exercise was lifted with people allowed to linger in parks and other public spaces from Monday.

More measures on socialising were due to be dropped Wednesday, though confusion reigned over what exactly would be allowed.

All five countries, including Germany, have made it clear that restrictions will be reimposed if the ‘R’ figure creeps too high and cases begin mounting again.

Underlining the difficulty that European nations are facing, South Korea – which has been widely praised for its world-beating response to the virus – suffered a spike in new infections at the weekend. 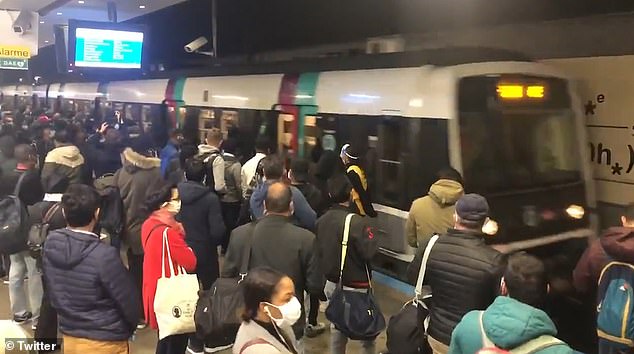 France was among European countries relaxing its lockdown on Monday with non-essential businesses allowed to reopen, prompting crowded train platforms in Paris 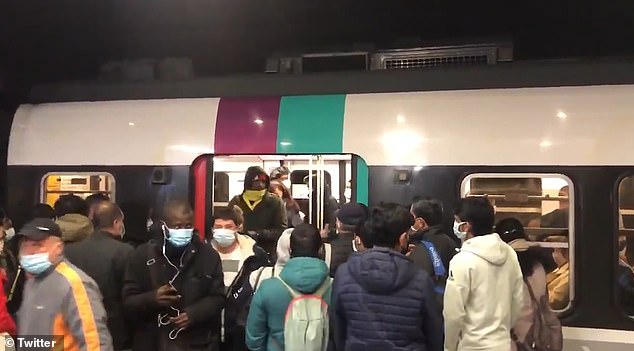 Of the 35 cases reported Sunday, 29 of them were linked to nightclubs in the capital Seoul, raising fears that thousands of people could have been exposed.

Officials are now scrambling to trace everyone who may have come into contact with the infected so they can be tested and quarantined if necessary.

The sudden spike has convinced authorities to push back a reopening of schools that was planned for Wednesday.

Meanwhile China also reported reported 17 new cases on Sunday, it’s highest figure since April, ten of which were not linked to overseas travel.

It comes after 14 cases were reported Saturday, at least one of which was not linked to overseas travel, raising fears the infection is spreading locally once more.

Several cases have also been reported in the old epicentre of Wuhan. 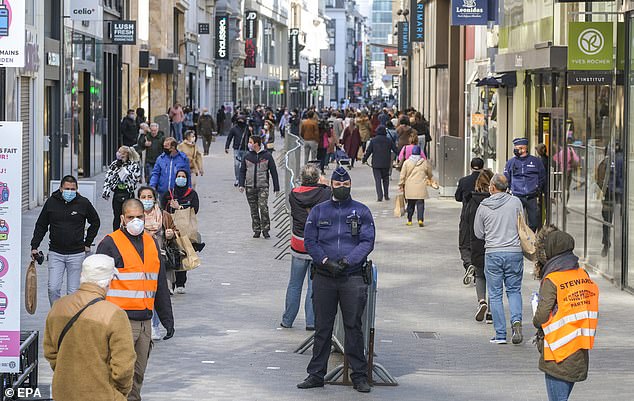 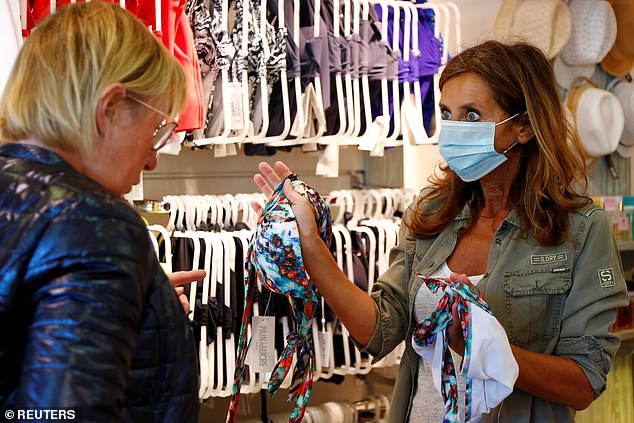 Germany has the sixth-largest COVID-19 caseload in Europe but has managed to contain fatalities from the highly infectious respiratory disease thanks to widespread and early testing and a healthcare system that is well-run and well-funded.

The latest phase of its pandemic management has, say critics, placed too much burden on local authorities to detect and respond to new outbreaks.

A threshold set at 50 cases per 100,000 people for reimposing distancing measures is also seen by some epidemiologists as too high.

This level has already been triggered in two districts in the states of North Rhine-Westphalia and Schleswig Holstein, where COVID-19 has broken out among workers at meat processing plants.

The plant in North Rhine-Westphalia was closed on Friday after more than 150 of its 1,200 workers tested positive. Many are migrants from eastern Europe hired by subcontractors and housed in shared quarters that are a potential infection hotbed.

Riot police clashed with hundreds of protesters in Berlin yesterday during a demonstration against coronavirus lockdown in Germany.