Wonderful Windermere! Girl, 10, watches extraordinary rainbow arc through the storm clouds over the Lake District during a brief break in heavy rain that battered Britain

This striking image shows a 10-year-old girl watching an extraordinary rainbow arc through the storm clouds over the Lake District during a brief break in the heavy downpours that have battered Britain.

It was taken from the top of the Langdale Pikes in the Lake District, Cumbria, by photographer and holidaymaker Chris Orange, 46.

It shows his youngest daughter Amy, ten, standing atop the Fell, gazing out over the erratic Lake District weather, with Great Langdale stretching all the way out to Lake Windermere in the distance.

Mr Orange said: ‘The weather has felt really dramatic here – we’ve had the most incredible spells of heavy rain, followed by these incredible rainbows with such strong colour. If you climb high enough up the Fells, you can watch the weather roll in and then change when it arrives.’

It comes as July is set to end with downpours this week as heavy showers continue to hammer Britain ahead of sizzling temperatures in August.

Two inches of rain fell overnight and will continue to blight much of the country during the day as it combines with strong winds.

Gales topping 40mph started lashing the west of the UK last night and have continued into the morning ahead of another dull day for Britons. It may also feel muggy as temperatures reach 72F (22C) in the south east. 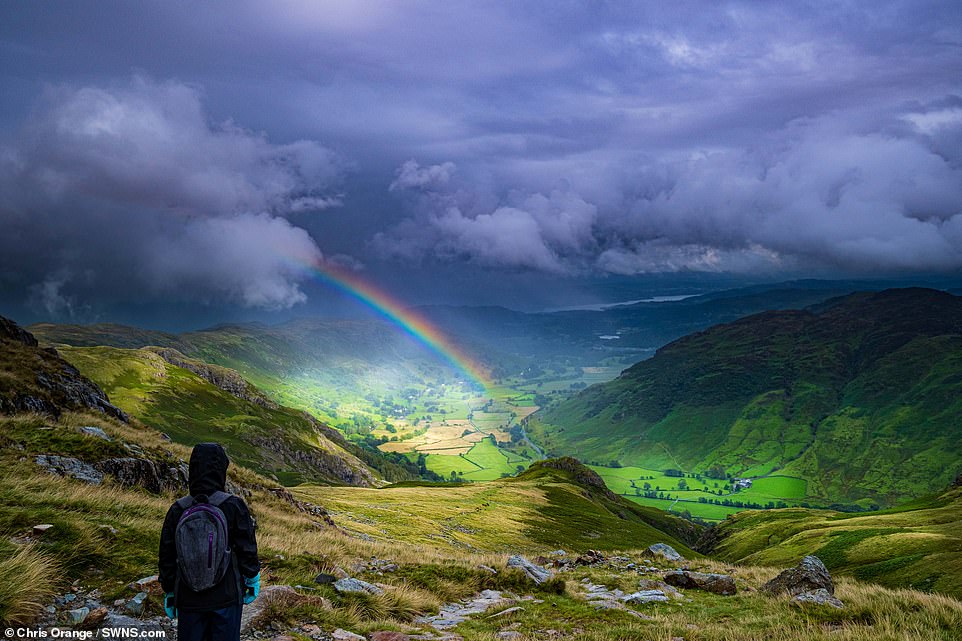 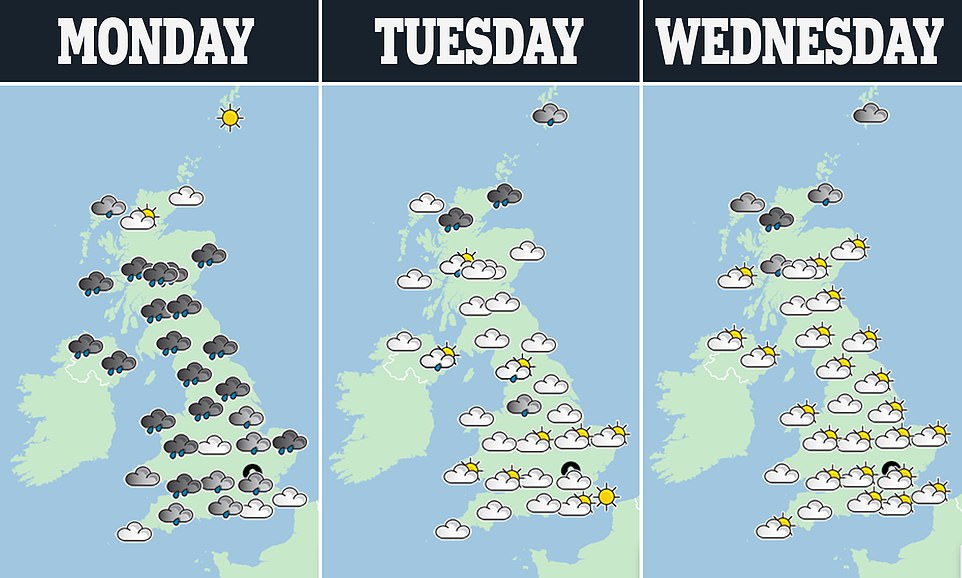 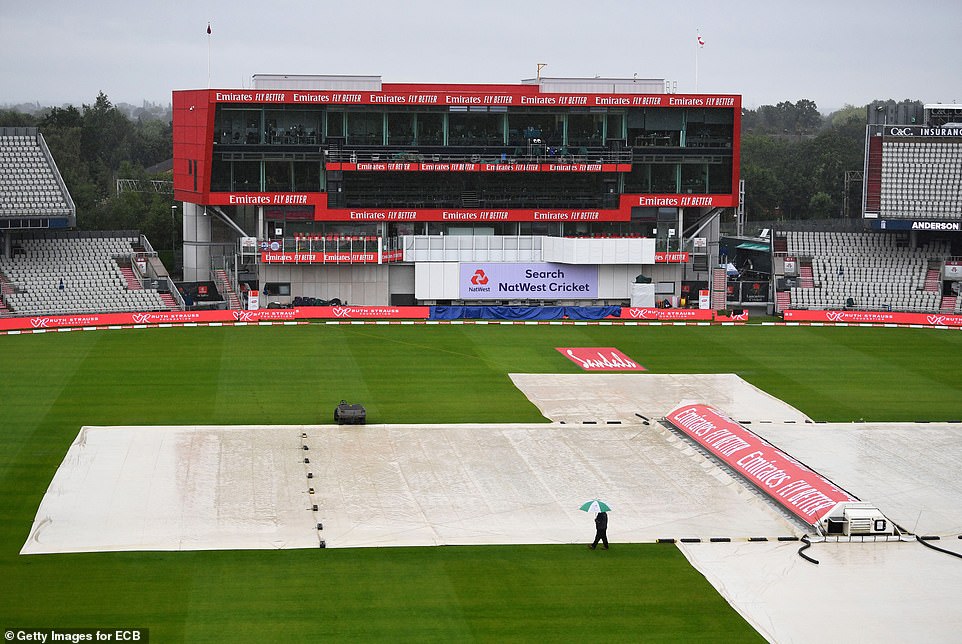 Two inches of rain fell overnight and will continue to blight much of the country during the day as it combines with strong winds. Cricket has been put on pause at Old Trafford in Manchester as England look to finish off the West Indies in the Test

Thunder and lightning even struck from Burnham-on-Sea to Clevedon in Somerset this morning, but was short lived according to locals.

There are no weather warnings in place across the country this week, but the Met Office advised drivers to take care because there will be a lot of water on the roads due to the heavy showers.

Volunteers from RNLI Peterhead were called out to rescue two boys who were fishing and became trapped by the tide.

The crew were called out at 3.07pm on Sunday by the boys, who had been fishing in the Bullers of Buchan, in North Haven.

They realised the tide had come in and were unable to safely get back to shore.

After getting a 999 call, the RNLI crew launched the Y Boat – a powerful, inflatable boat – which allowed them to get as close to the boys as possible.

After being fitted with life jackets, they were safely taken from the cliffs and back to shore.

Patrick Davidson, deputy coxswain at Peterhead Lifeboat, praised the boys for their smart and swift actions, which resulted in a safe rescue.

BBC weather presenter and meteorologist Simon King said: ‘It’s a horrible start to the day here in the North West, the pitter patter of rain on the umbrella.

‘Heavy rain across many parts of the UK this morning. It’s not quite there yet across northern Scotland but that rain is going to move its way in during the course of the morning.

‘It will be perhaps drier later on in north west Scotland, Northern Ireland, through Wales and the south west of England as that rain starts to clear away towards the North and the East.

‘It’s quite windy here as well, quite breezy really across most areas. And it’s going to feel disappointingly cool again for July with a maximum of temperatures only really getting to around 14 to 17 degrees in northern areas, perhaps up to 20/21C in the south east of England.

‘But that wind will take the edge off the temperatures. As for Tuesday a little better and drier, there’s not much in the way of rain – except in the north east of Scotland, but quite cloudy.’

It comes ahead of a sizzling August as the mercury is set to shoot up to 86F (30C) by the end of the week, with the south east retaining the bulk of the heat.

The Met Office refers to a ‘very brief warm spell’ at the end of the week with a ‘good deal of sunshine’ and it getting hot in south eastern areas.

But it warned of scattered showers and thunderstorms which will ‘probably introduce cooler, more changeable conditions from the west next weekend’.

Moving into August, meteorologists predict ‘changeable weather’ as bands of rain are joined by strong winds which are broken up by ‘brighter, showery conditions’ across the country. 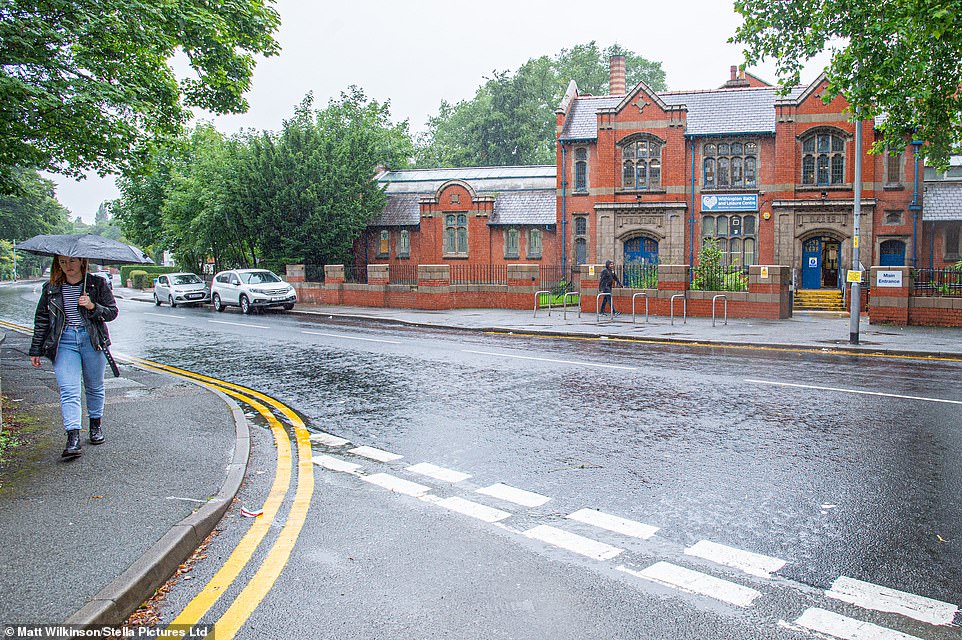 Gales topping 40mph started lashing the west of the UK last night and have continued into the morning ahead of another dull day for Britons (pictured, Withington Baths & Leisure Centre in Manchester 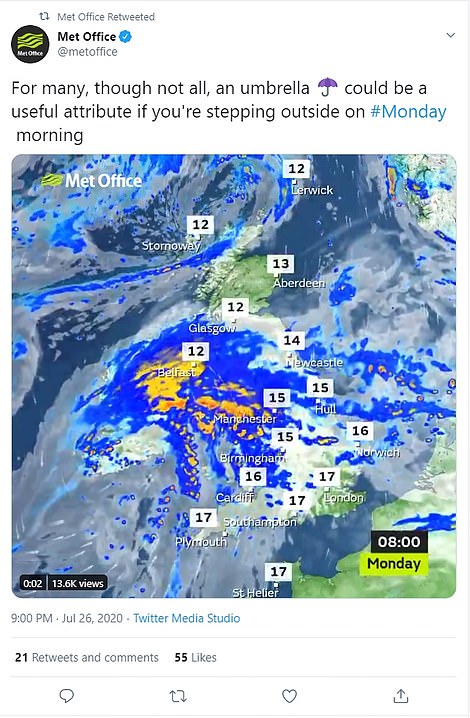 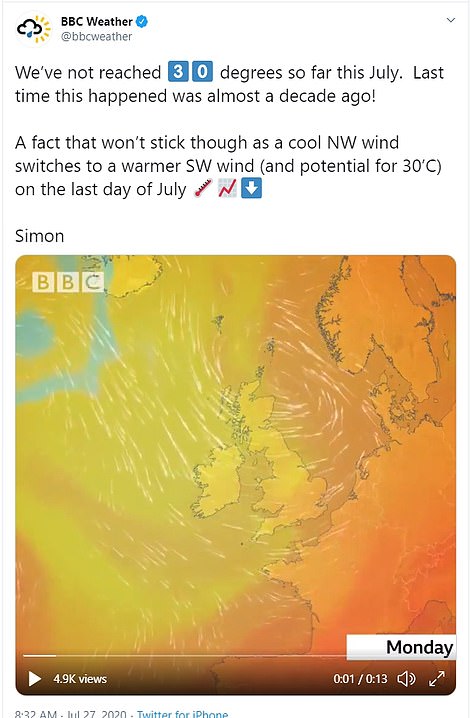 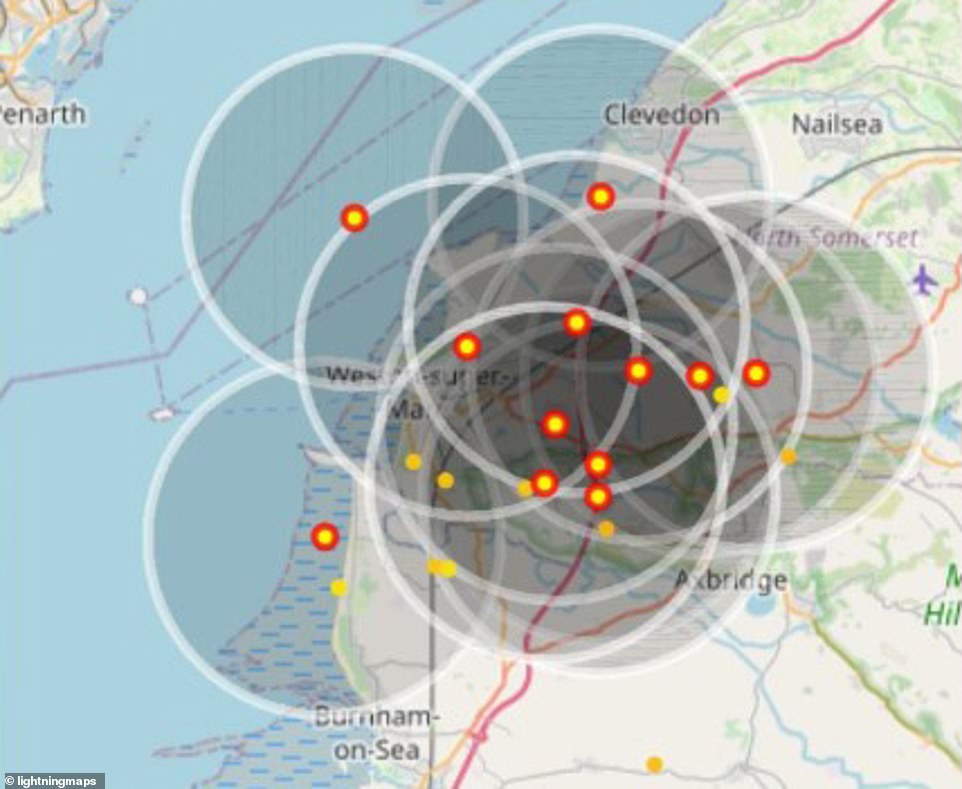 Thunder and lightning even struck from Burnham-on-Sea to Clevedon in Somerset this morning, but was short lived according to locals

A man’s body was pulled from the sea in Dorset over the weekend. The Weymouth Lifeboat Facebook page said a person was having difficulty in the water near Portland Bill at 1.30pm on Saturday.

The man’s body was found at around 2pm in the choppy waters. Multiple crews carried out CPR on the man before he was flown to hospital – where he was later pronounced dead.

‘Weymouth RNLI All-weather lifeboat was launched at 1.29pm on Saturday, July 25, following a report from Solent Coastguard of an unconscious male swimmer in the water near to Portland Bill. The Inshore lifeboat was also launched shortly afterwards at 1.33pm.

‘In difficult circumstances of poor visibility and choppy sea conditions the casualty was located by the Inshore lifeboat some 300m South West from Portland Bill and taken onboard at 2.00pm.’

It added: ‘When Coastguard rescue helicopter 175 arrived on scene the casualty was transferred from the all-weather lifeboat into the helicopter and taken straight to Poole Hospital where shortly after arrival he was sadly pronounced dead.’

The Met Office website adds all parts of the country should experience some dry spells, but they are more likely to be in the east than the west.

Yesterday Britons were treated to yet another soaking Sunday as the summer’s horrendous weather continued. Thunder and rain hit the country once more after showers and a small tornado swept through the UK on Saturday.

The morning saw sunny spells for most areas and although a scattering of showers developed some southern and eastern parts remained dry.

But it became windy in the far north west, with more persistent rain later in the day marking an abrupt end to the mini heatwave.

On Saturday a yellow thunderstorm warning was in place, with thunder and lightning seen across the south up until midnight.

Despite the downpours yesterday, temperatures remained relatively high, with peaks of 75F (24C) in the south of the country.

It came after a tornado hit Northampton at around 8pm on Saturday, damaging homes and allotments. Footage showed the twister flinging debris into the air which left sheds overturned and sent fence panels airborne.

Locals reported tiles being ripped from rooftops, power lines coming down and trampolines and bins being lifted from gardens.

Joe Minney from Moulton said: ‘My bathroom window blew open and my blind was ripped out the fixings. My bins were blown over and the rubbish chucked up into the air really high.

‘You couldn’t hear anything but the sheer roar of the wind as the tornado ripped through the back of the house and the allotments. Luckily we have an eight-foot brick wall surrounding our garden so no fences fell down.

‘But it was crazy. The door was open to let a breeze in but never expected a tornado to come past I couldn’t physically shut the back door.’