'God save the Queen!' Brits heap praise on monarch

‘God save the Queen!’ Brits heap praise on monarch after her stirring televised address calling on the nation to unite to succeed in the battle against coronavirus

The Queen’s address to the nation to boost morale during the coronavirus crisis has been hailed as her ‘finest moment’.

In a rare televised broadcast, which was pre-recorded at Windsor Castle, Her Majesty urged Britons to steel themselves for challenging weeks ahead.

Her message of hope reassured the locked-down public that ‘better days will come again’ and loved ones will be reunited.

The highly personal and rare address, which was only the fifth Queen’s speech outside of Christmas Day, was aired around the world.

Evidently touching the hearts of many, a tidal wave of support for the monarch flooded social media, with much of the country seemingly re-energised to pull together and beat back coronavirus. 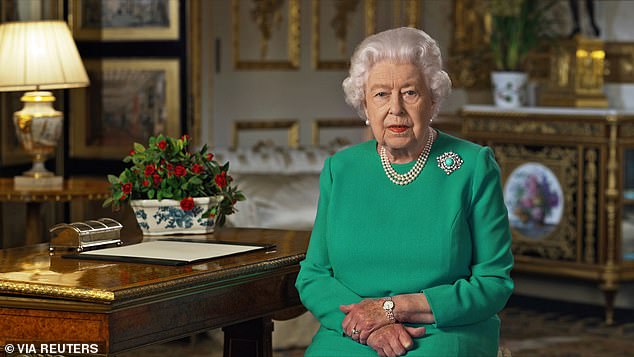 The Queen addressed the nation last night, in a historic speech amid the coronavirus outbreak

The Queen’s granddaughter Princess Eugenie praised her speech, posting on Instagram: ‘Thank you for your words, they bring us together and unite us in our effort to overcome.’

Eugenie’s mother Sarah, Duchess of York – the ex-wife of the Queen’s son the Duke of York, said: ‘Her Majesty’s words touched my core and inspired us to never give up.’

Good Morning Britain presenter Piers Morgan, who has been scathing of the government’s handling of the health emergency, heaped praise on Her Majesty.

He tweeted: ‘A magnificent speech from a magnificent lady. Thank you, Your Majesty – this was your finest moment as our Monarch.’

Health Secretary Matt Hancock wrote: ‘A striking and important message from Her Majesty the Queen on coming together and standing with all nations to tackle #coronavirus. Such strength to draw on – a vital reminder that we will succeed and better days will return.’

‘The Queen speaks for the whole country and our determination to defeat the coronavirus,’ new Labour leader Sir Keir Starmer tweeted.

Trade Secretary Liz Truss described the message as ‘inspiring’, while Nadine Dorries MP – who tested positive for Covid-19 earlier in March – said it was ‘perfect’ and adding: ‘We really are all #InThisTogether.’

‘The Queen’s own quiet resolution on how we will see the other side of this and ‘meet again’ was reassuring, I thought,’ she wrote.

‘Didn’t know I needed to hear that, but it turns out I did.’

Mayor of London Sadiq Khan praised the Queen’s recognition of front-line workers during the pandemic.

‘Great to see our hardworking heroes, working flat-out on the frontline, front & centre of the #QueensSpeech,’ he wrote.

But it wasn’t just the political sphere that reacted positively to the monarch’s words. 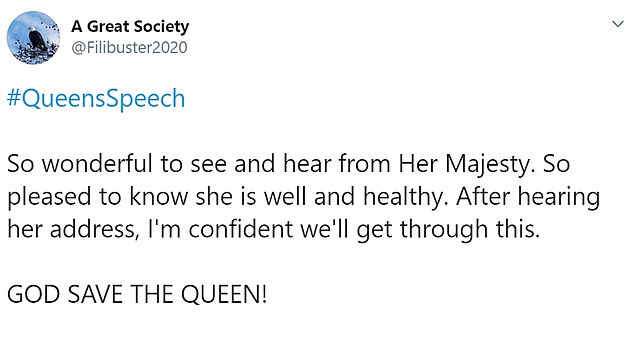 Presenter and poker champion Victoria Coren Mitchell was enthusiastic, posting: ‘Hurray for the Queen! I thought that speech was terrific.’

The message travelled overseas too, with Queer Eye star Jonathan Van Ness tweeting ‘Watching the queens speech’ alongside a wistful gif of himself.

A royal expert said the televised address was a ‘calming message at a time of crisis’.

Joe Little, managing editor of Majesty magazine, said the monarch made a ‘touching and heartwarming’ reference to children’s rainbows being the symbol of the national spirit.

He described the rare address as history repeating itself, with the Queen delivering the message from Windsor Castle, just as she did 80 years ago as a young princess in a radio broadcast during the Second World War.

The royal commentator said: ‘It’s a calming message from the Queen at a time of crisis.

‘Some might question the validity of such a thing in the 21st century, but clearly she is still seen by many as a matriarch, both here and in the other countries of which she is Queen.

‘So people look to her at times such as this.

‘Although she has witnessed so many catastrophes throughout her 68-year reign, she’s never come across anything quite like this before.’

The Queen spoke about the unprecedented nature of the coronavirus pandemic, saying: ‘While we have faced challenges before, this one is different.’

Throughout the UK, youngsters have painted and drawn rainbows and hung them in their windows to raise the spirits of passers-by, while thousands across the country have taken part in the Clap for Carers tributes.

The Queen said: ‘The moments when the United Kingdom has come together to applaud its care and essential workers will be remembered as an expression of our national spirit; and its symbol will be the rainbows drawn by children.’

Mr Little said of her reference to the rainbows: ‘It was quite touching and heartwarming.’

He added: ‘She also talks about the speech she gave 80 years ago with Princess Margaret in October 1940 in the same Windsor Castle setting.

‘It’s quite remarkable that it should be necessary to speak about a world in turmoil 80 years later.

‘It appears to be deeply personal but it is what you would expect her to say as head of state and head of the Commonwealth.’

The message made no direct mention of the Queen’s own family’s experience of coronavirus.

Her eldest son the Prince of Wales contracted and recovered from the illness. 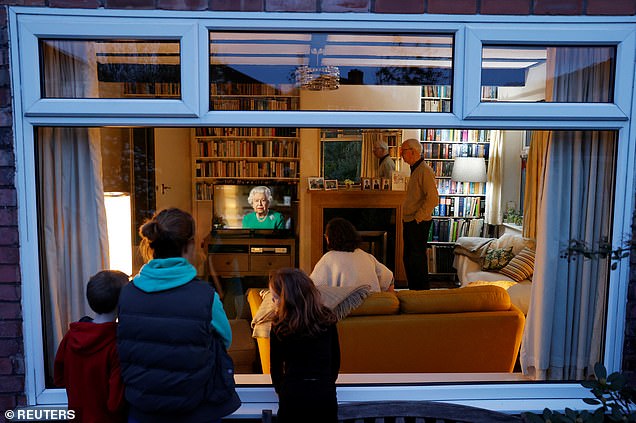 Peter, Kate Beresford and family members in the garden watch Britain’s Queen Elizabeth II during a televised address to the nation at their home 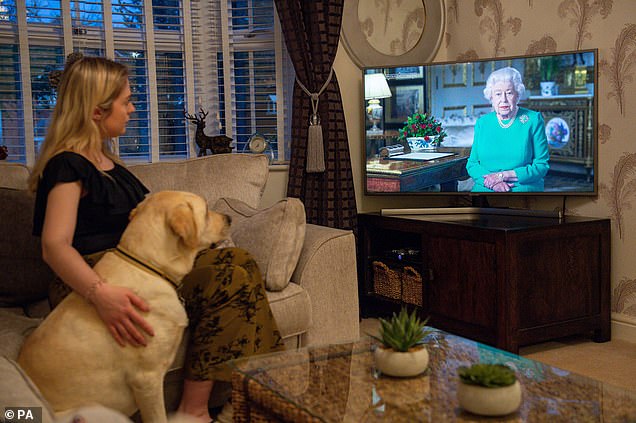 The Doyle family, in the village of Bishop’s Itchington in Warwickshire, watch Queen Elizabeth II deliver her address to the nation 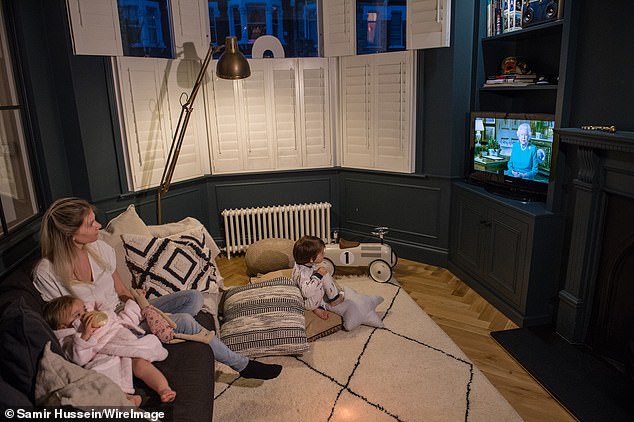 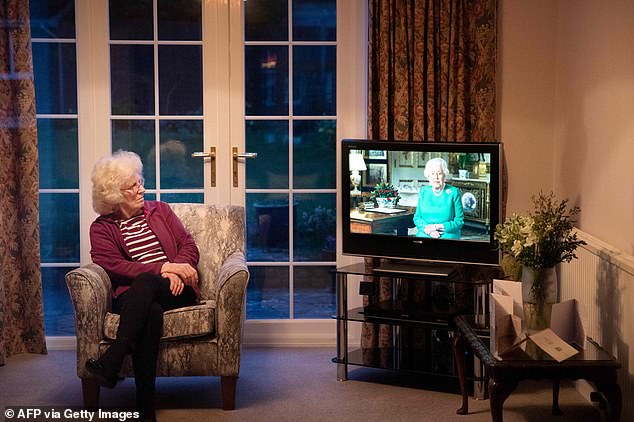 Val Cloke sits in her living room in the village of Hartley Wintney, west of London, watching the Queen’s historic address tonight 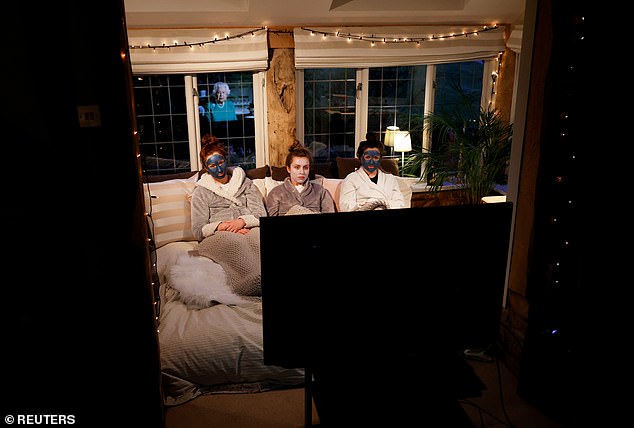 Molly, Emily and Sophie watch Britain’s Queen Elizabeth II during a televised address to the nation on the coronavirus outbreak

Mr Little said: ‘Perhaps mentioning Charles might have distracted from the other people that warranted her attention, such as the carers and key workers.

‘I think the message was more as monarch rather than as mother.’

Royal author Penny Junor said the Queen had shown the nation she is ‘with us in this dark hour’.

Ms Junor said: ‘I thought it was superb. It really shows us what monarchy is all about.

‘In the Second World War during the Blitz, the King and Queen chose to stay in London and stood shoulder to shoulder with the British public.

‘There’s the same feeling of solidarity here. She’s with us in this dark hour.

‘It’s reassuring. It’s calm, and the wisdom it shows is very inspiring.’