November, 2021. In the vast, comically gauche estate of Mar a Lago, Donald J. Trump lives as president-in-exile – and more influential than the actual President. Unhappy with the “sad, disrespectful” quota of Secret Service guards, Trump has bolstered his private security with a hundred Proud Boys and furnished them with gold-plated, “MAGA”-stamped submachine guns. These young neo-Nazis vet thousands of pilgrims daily, allowing just two through a week to kiss the ring of their High Priest. 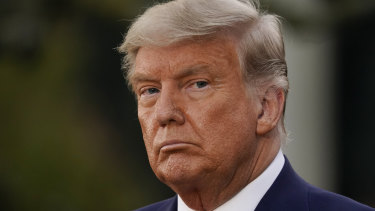 The president-in-exile has bought the One America Network and renamed it “Trump TV”. Still smarting from Murdoch’s refusal to retract Fox’s early Arizona call, he has vindictively lured the most sycophantic talent from his network. Having seen his old campaign adviser, Steve Bannon, suggest the ceremonial murder of Dr Fauci and the FBI director, he has since re-employed him as Trump TV’s executive producer.

Subscription numbers are huge – “bigger than anything you’ve ever seen” – and his Twitter feed is for sale. There’s also money in selling dinners, rounds of golf, or national secrets. The secrets cost only slightly more than the steaks, while the cult is cleverly subsidised by Putin.

Through intermediaries, Putin also helps Trump’s children establish their own troll farm in Warsaw, similar to Russia’s Internet Research Agency, and it begins an industrialised, historically prodigious production of disinformation. The American intelligence community knows what’s going on, but enough Americans either don’t care or don’t believe their warnings.

As embittering as the 2020 loss was, the president-in-exile might now be happier than he was in the White House. He’s comforted that tens of millions of Americans believe that he was literally robbed of the presidency – but having lost it, he can exercise a similar influence without pretending to care about any of its responsibilities. There were worse outcomes. 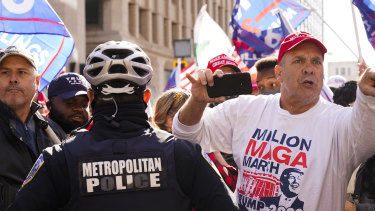 Trump supporters in Washington after the US election.Credit:AP

Federal prosecutors circle. There’s evidence of myriad financial crimes, dating back decades, and there remain the 26 women who have accused him of sexual assault and rape. This list of possible indictments doesn’t count the crimes committed while in office, which include treason. Still, the Don’s influence is great – and there are high-level, private discussions about how dangerously provocative his arrest might be.

Trump’s children understand the totemic power of their father, and desire his imprimatur. They realise it could make them president. Competitively, they court his sympathies while ignoring his emotional violence – and the blood in the streets. Jared and Ivanka squabble over who has dibs on the White House.

Unpunished by voters in 2020, the Republican party has not reconstituted itself. It remains a cult of personality, and sitting members still live in fear of His Tweets. These Tweets are more influential than any Biden speech; and vastly more influential than Obama’s memoirs – which sold millions, but were bought mostly as relics or presents for parents-in-law.

As President, Biden is historically lame. Never bright, he now flirts with senility, and he’s undermined by a popular, fanatically held belief that he stole the election. He’s also thwarted by a Republican Senate whose only goal is sabotage – and whose profound cynicism is fortified by the popular belief in the President’s illegitimacy.

So, his climate bill dies. So too his attempt at increasing the minimum wage. Attempts to negotiate electoral reform with the states falter quickly. Meanwhile, 87 per cent of registered Republicans receive all of their news from Facebook. Almost none of it is accurate. Almost none of it cares to be. Used to incite two genocides, Biden’s attempt to regulate Facebook still goes nowhere.

The country is awesomely combustible, and the President frets about assassinations and uprisings.

And with each failure, Trump mocks Biden’s weakness on Twitter. It’s long been established that the best way to get ahead, politically, is to undermine those governing – and then accuse them of impotence. And so it goes.

Years before, it came to pass in America that there were more guns than people. Now, in 2021, gun sales resemble the previous winter’s infection rates. The country is awesomely combustible, and the President frets about assassinations and uprisings. Despite its witless inadequacy, the word “divided” is still used to describe the country. Better to describe America as multiple countries defined by vastly different philosophies and circumstances. What’s shared is that its citizens live in delirious and uncomprehending fear of the others.

Psychologists still tell clients that feelings aren’t facts, but collectively that’s no longer true. Paranoia is reality; psychosis truth. There are no barometers, thermometers, or compasses. The only instruments for measuring anything now are hate and credulity. You can choose your own reality now. In fact, you’re encouraged to. A profound threshold has been crossed.

But Biden, and progressive media outlets, still fail to mention that the life expectancy of its citizens is shrinking, and has been since 2015. In 2021, suicide, opioid overdose, and alcohol-related deaths now count 230,000 annual deaths. Most of these are white, middle-aged men without college degrees. That genuine neo-Nazis like these statistics has meant that few others have dared to discuss them, confirming for the blighted that “elites” have wilfully, and fatally, ignored them.

A large number of Americans have been spooked by the realisation that their democracy is not guaranteed by God, habit or any inherent genius, but is instead very fragile and contingent upon popular faith. Many of these spooked Americans are still unsure of what to do with this knowledge, other than telling their brother-in-law not to share Facebook posts about how the President’s son allegedly paid an ostrich for sex. More than one journalist wonders what the point is anymore.

Now tell me: How much of this fever dream can be emphatically discounted?