Governments could use social media to enforce coronavirus lockdowns

Social media posts are being used to track whether people are adhering to strict coronavirus lockdown rules in Italy.

Researchers claimed to have identified places where lockdowns were being breached this month after analysing half a million photos and videos uploaded to people’s Instagram stories.

It follows similar efforts in China, South Korea and the US to use people’s data to track the spread of the virus, isolate potential cases, and identify rule-breakers. 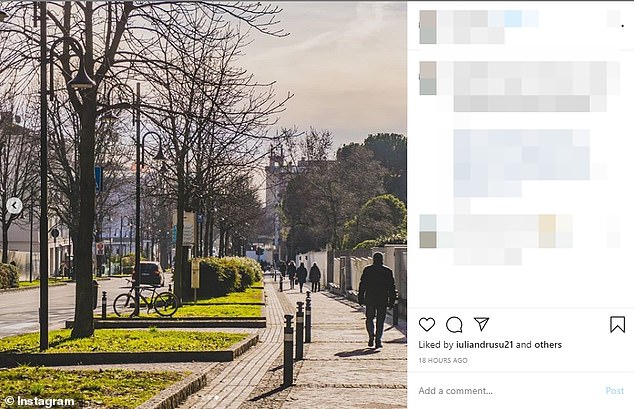 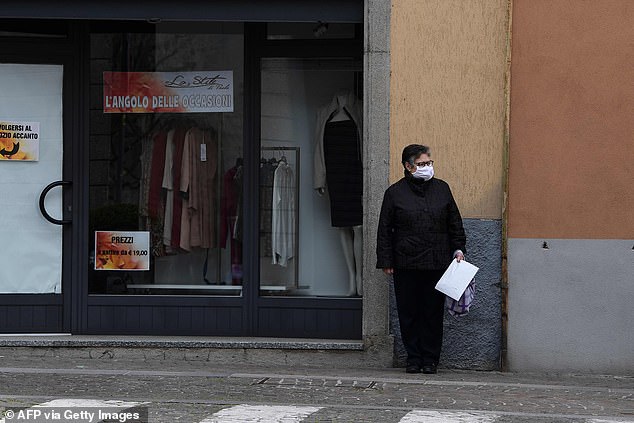 Italy has the most coronavirus deaths of any country in the world at more than 7,500 people, but is struggling to trace the spread of the virus amid a lack of testing kits

Ghost Data, a US and Italian research company, was behind the latest effort to help control the spread of the virus which has killed more than 7,500 people in Italy alone.

The data the company collected was fed into LogoGrab image recognition software to identify places where the rules were being broken.

Andrea Stroppa, found of Ghost Data, told Cnet that the companies identified 33,000 people who were likely in breach of lockdown rules.

He said the research had been provided to the Italian government.

He added: ‘In our view, privacy is very important. It’s a fundamental human right.

‘However, it’s important to give our support to help the government and the authorities. Hundreds of people are dying every day.’

It comes after South Korea, which has overseen one of the most impressive responses to coronavirus anywhere in the world, employed similar tactics to get its infections under control. 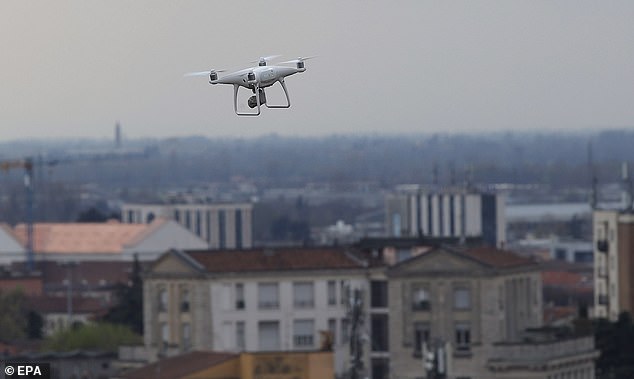 While the country employed some tactics that are being used the world over – including mass testing at drive-through sites – it has so-far avoided mass lockdowns of the kind used in China and western countries.

Seoul did this by aggressively ‘contact tracing’ people who had encountered infected people, allowing them to build up a much more detailed picture of how the virus was spreading and who might have it.

Messages would then be sent out to the phone of anyone who might have come into contact with that person urging them to get tested.

Websites and smartphone apps are used to alert people to where patients have been hour-by-hour, allowing them to identify if they might have been infected.

And those forced into self-quarantine are forced to download an app that monitors whether they are breaching self-isolation guidelines with fines up to $2,500 for non-compliance, the New York Times reports.

While China made liberal use of lockdowns now being seen in the West – at one point restricting the movement of an estimated 760million people – it also used phone and social media data to track potential cases. 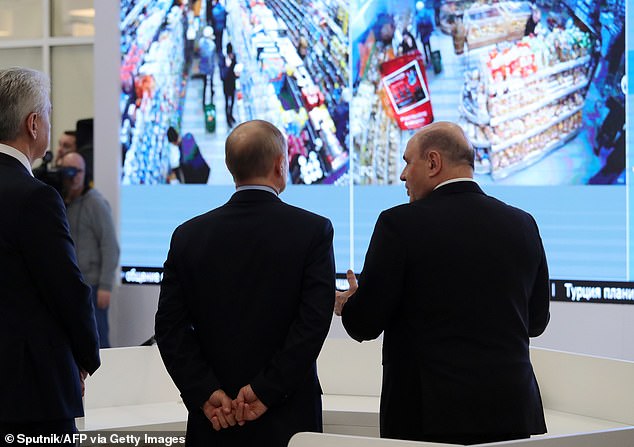 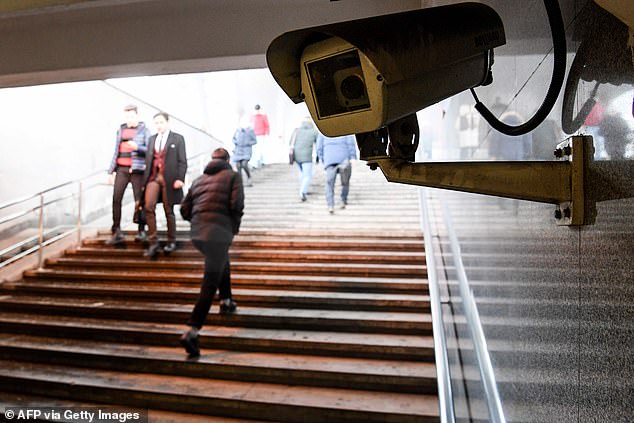 A WHO report into China’s response noted that: ‘New technologies were applied such as the use of big data and artificial intelligence (AI) to strengthen contact tracing and the management of priority populations.’

Data from WeChat, China’s equivalent of WhatsApp, and Alipay, which is similar to PayPal, was also used to check the movements of infected people and to stop them travelling after they had been placed in quarantine.

In the US, a company called Unacast is using GPS data from mobile phones to track how closely people are adhering to lockdown and social isolation rules.

By comparing data on how far people travel in a typical week to how far they have travelled since the outbreak began, the company created a ‘heat map’ showing how well guidelines are being adhered to.

The data can be broken down county-by-county within states, but provides a general overview rather than data on specific individuals that was collected by the likes of China and South Korea. 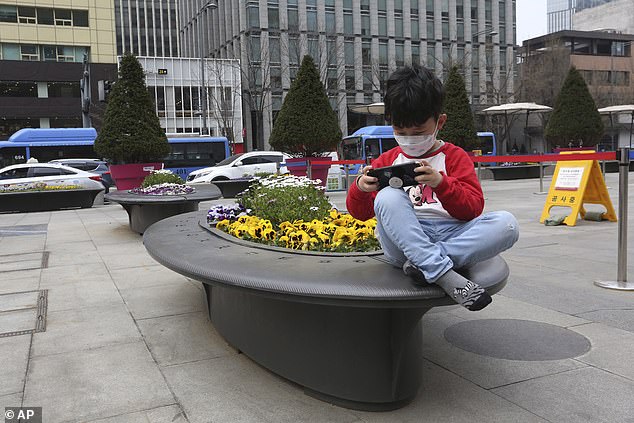 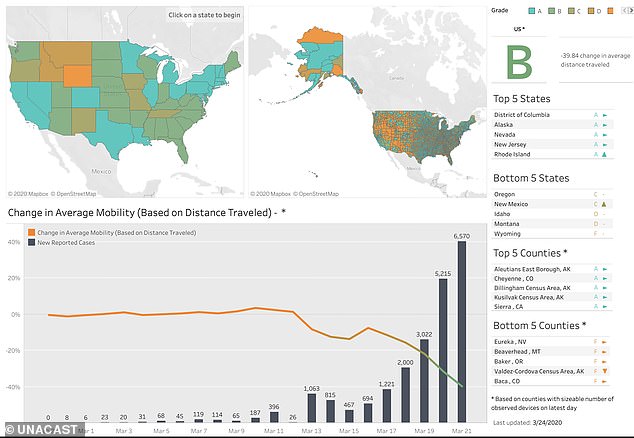 A firm called Unacast is using GPS phone data to monitor how well people are adhering to social distancing rules by comparing movements on a typical day to movements after the rules were put in place, identifying places where people are less compliant (in orange)

Meanwhile the Russian government is taking matters into its own hands by deploying facial recognition software via CCTV camera in Moscow to ensure that people who have been quarantined with suspected infections stay in isolation.

100,000 cameras in the city have been fed images of people who are supposed to be self-isolating, and will inform staff in a purpose-built coronavirus control centre if they venture out.

The same centre is also being used to monitor the internet for ‘fake news’ about the virus, the Kremlin said, and to track foreign arrivals from virus hotspots.

So far, Russia has not put in place a lockdown.

In Hong Kong those under quarantine are being made to wear location-tracking wristbands.

The coronavirus pandemic has killed at least 20,500 people worldwide since it first appeared in China in December, official figures released on Wednesday said.

More than 452,160 confirmed cases of infection have been diagnosed in 182 countries and territories since the start of the pandemic.

The tallies, using data collected from national authorities and information from the World Health Organisation (WHO), are likely to reflect only a fraction of the actual number of infections.

Many countries are now only testing cases that require hospitalisation.