In the lead-up to grand final day, Geelong fan Richard Armstrong bought a pizza oven, hopeful that restriction rules would allow at least another family to visit for a barbecue.

New rules announced on Sunday allow certain gatherings in public outdoor spaces, but hosting another family in the backyard remain off the table. 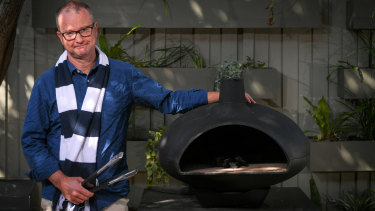 “It’s unfortunate, but I understand that we can’t change the situation we’re in,” said the North Fitzroy father of two.

Premier Daniel Andrews has stood firm against the traditional grand final barbecues, despite days of low COVID-19 case numbers, but has flagged further easing of restrictions.

“What starts off as perhaps an outside gathering doesn’t stay outside for long," Mr Andrews said on Tuesday.

"Weather turns, people are using [shared] facilities, all those sorts of things."

Mr Armstrong agreed there were different risks at home.

“When people are within the four walls of a home or out the back, and people have a few drinks, then a lot of social distancing is forgotten,” he said.

“Whereas I think if it’s in a public place, people can be observed, so they perhaps manage their behaviour a little bit more.”

Natalie Cuschieri faces a double bill on Saturday: her daughter’s third birthday, as well as the grand final. She is less convinced the risk of transmission stops at the front gate.

“If we can go outside to a public park, why can’t we go outside in our backyard? It’s open air outside,” she said.

The Tigers fan said her family would usually host a grand final event and would have liked to invite her daughter’s cousins over for a small birthday celebration.

“We would have been outside where we could spread out a bit more,” she said.

“We could do a barbecue and play a couple of games with a couple of the younger kids, like her cousins and her brother, but we can’t do that.”

Instead, the family has planned COVID-safe birthday celebrations such as cookie deliveries and a Facebook video call for cake and candles. 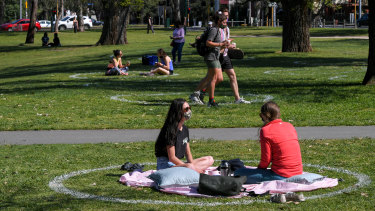 Despite this, he said, the gardens had the “capacity and the systems in place” to maintain the rules.

“We put advice on our gates about people physically distancing and wearing masks, and we have visitor experience officers who walk through the site and check that people are following those rules,” he said.

“The police have also been wandering through our sites, so they will enforce [the rules] if they need to.”