Greedy seagull gets its head stuck in bag of crisps

Oh crumbs! Greedy seagull is left wandering around blindly after getting its head stuck in bag of crisps

This is the hilarious moment a greedy seagull ended up with crisp packet stuck on its head after it tried to eat the contents.

The daft bird ended up going hungry after it tipped the crisps out onto the pavement and the rest of its flock gobbled them up.

The scene was filmed on August 18 outside Woodend Hospital in Aberdeen, after the bird attempted to pick up the packet, but ended up trapping himself inside.

As the video begins, the seagull is seen strutting around with a packet of Walkers cheese and onion crisps on its head.

Around it several other gulls mop up the crumbs which had been emptied when the bird upended the packet.

The seagull can be seen blindly stepping off the pavement with its head jerking around in the bag, before walking back up the kerb and wandering off still unable to see where it is going.

The other birds pay no attention as the bird continues to struggle, bobbing its head comically. 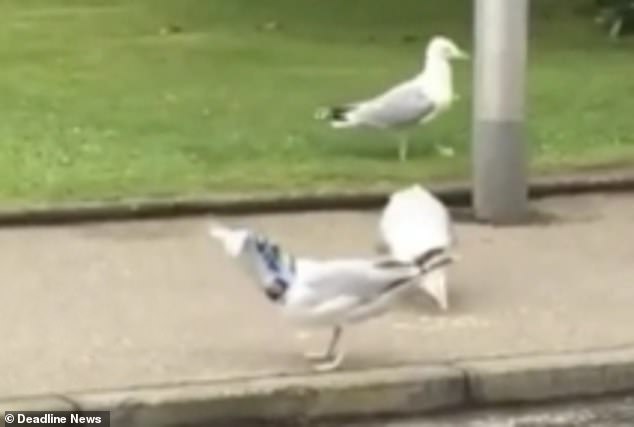 The clip was posted to Twitter by amused onlooker Neil Gordon, 58, shortly afterwards.

Sales manager Neil said the bird ‘came across a half-eaten bag of Walkers Cheese & Onion crisps and just basically shoved its head in the bag, getting stuck.

‘The crisps fell out and the other gulls got a feed. The gull eventually got his head out safely. 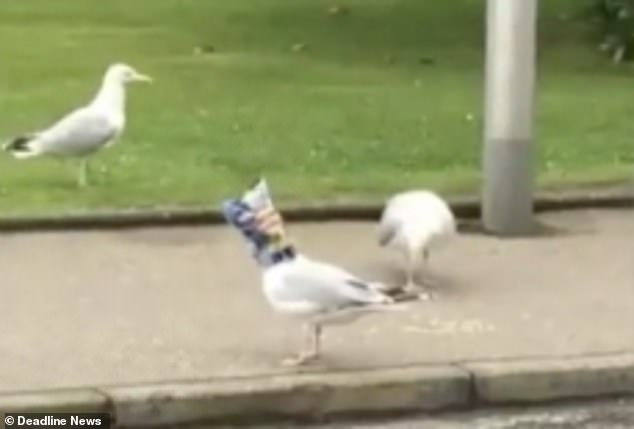 ‘The best and funniest part was the seagull emptied the crisps on the pavement and never got any, his fellow gulls scoffed the lot while he went walkabout.’

It’s not the first-time seagulls have made headlines for their love of crisps.

Last month, a seagull was filmed ‘shoplifting’ a packet of BBQ crisps from Moore’s Newsagents in Devon.

The bird was seen stealing the snack before making a hasty exit through the shop’s door. 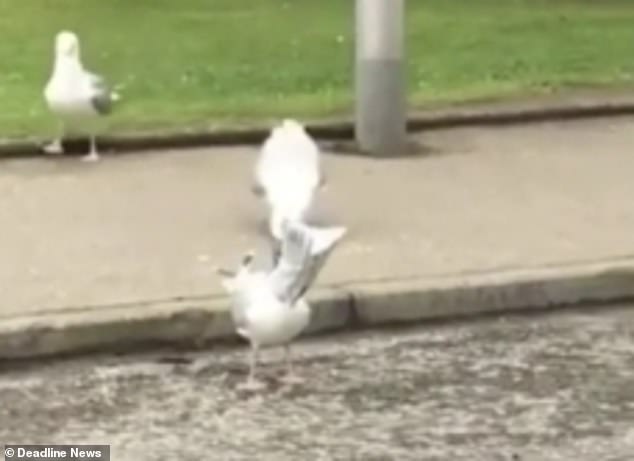 Sales manager Neil Gordon who took the video said: ‘Yesterday in Aberdeen, I came across a half-eaten bag of Walkers Cheese & Onion crisps and just basically shoved its head in the bag, getting stuck’