An armed group of black men who began patrolling Minneapolis during the unrest in the wake of George Floyd’s death have been praised by city officials.

The Minnesota Freedom Fighters was formed in late May after the NAACP chapter in the city’s north, predominantly black, neighborhood put out a call for residents to help protect small businesses from violence, fires and looting.

A group of about two dozen men gathered and have patrolled the streets since, carrying AR-15s and Glocks and wearing tactical vests and bandannas.

They have been welcomed by the city, who called their actions ‘commendable’. 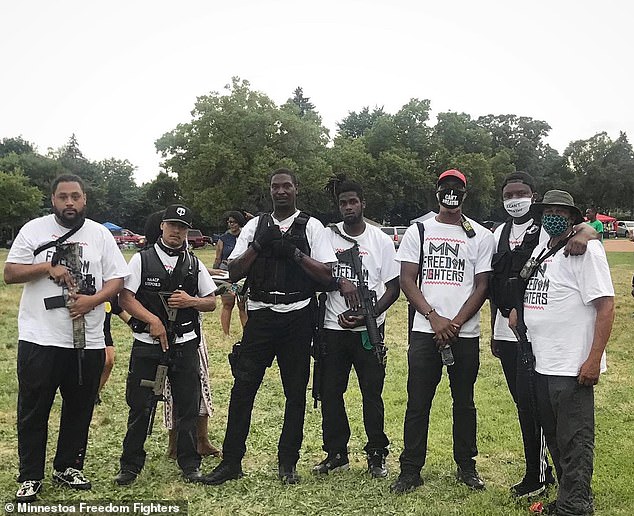 The Minnesota Freedom Fighters was formed in late May to patrol and protect businesses from violence, fire and looting in the wake of George Floyd’s death on May 25 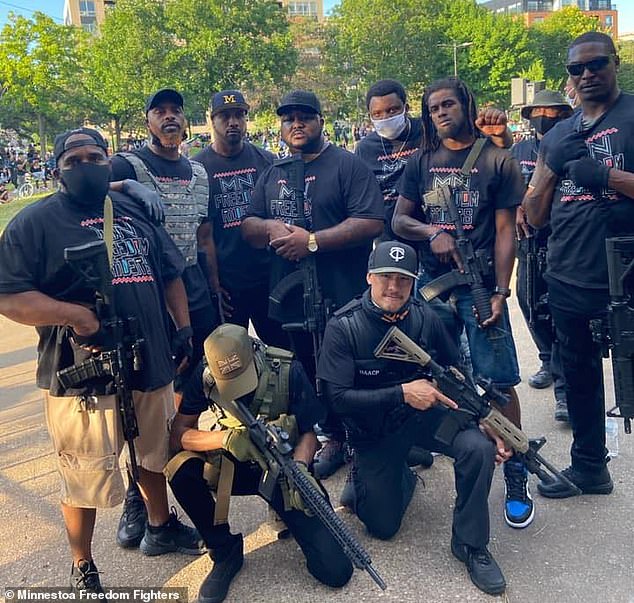 About two dozen black men answered the call for help in protecting the businesses. They patrol carrying AR-15s and Glocks and wearing tactical vests and bandannas

‘It’s important to have men from the community step up for the community,’ Sasha Cotton, director of the city’s Office of Violence Prevention, told the Los Angeles Times.

‘It’s their right to be out on the streets and it’s commendable. There are black residents who in the early days of the unrest felt vulnerable … and still do.’

The men, who include a retired firefighter, a healthcare worker and a veteran, have been in regular communication with the city and after unrest died down, continued to patrol streets and act as security for protesters.

According to the Times, they are in touch with precinct commanders and have met with Minneapolis Police Chief Medaria Arradondo, who is also black.

Its members have said they are not fearful of being attacked by police as they are viewed as an extra layer of security for the community.

‘Our objective is not to be the police, but the bridge to link the police and the community together,’ their mission statement reads.

The original call out from the NAACP added that they were tasked with protecting black heritage. 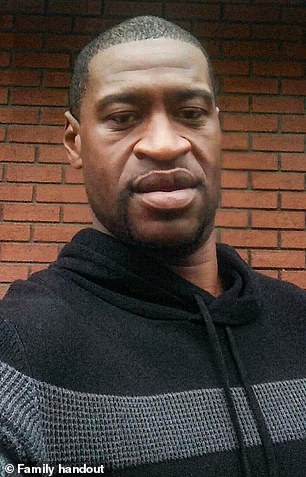 ‘We are creating a network of people who will disseminate information through relational organizing (an information tree), support on the ground protestors through giving rides from the protests, giving first-aid help, and protect black heritage sites from destruction,’ it read.

Rev. Tim Christopher, whose church is in north Minneapolis, has said he felt relieved to see the group at work in the streets.

‘It’s been a breath of fresh air,’ he said. ‘Seeing an armed black man — knowing he is here to take care of the community, nurture the community — is a blessing.’

Christopher also has a conceal carry permit and tells the Times he packs during church service on Sundays.

He said that he believes carrying a gun as a black man carries risks especially if pulled over my police.

‘At that point, my hands are on the steering wheel and I say, “Yes, officer, I have a firearm and it’s legal”,’ he said. ‘They always back up and place a hand on their gun.… There is a stigma, and they’re scared of Black men with guns.’

The group have also been welcomed by the Minneapolis NAACP, who have said they wish for the group of men to grow as community leaders.

‘These brothers were there in the beginning, when threats were being made by white supremacists,’ said the chapter’s president Leslie Redmond. ‘There is no doubt they stepped up for the community.’

Members include Robert Sayers, a fire inspector for the city of Minneapolis, who said he became involved in the group after witnessing properties being burned in the area near where George Floyd was killed. 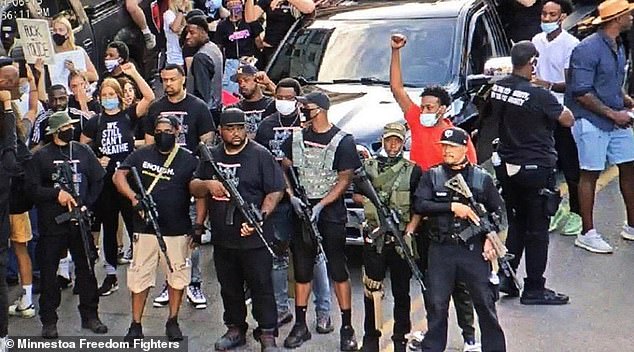 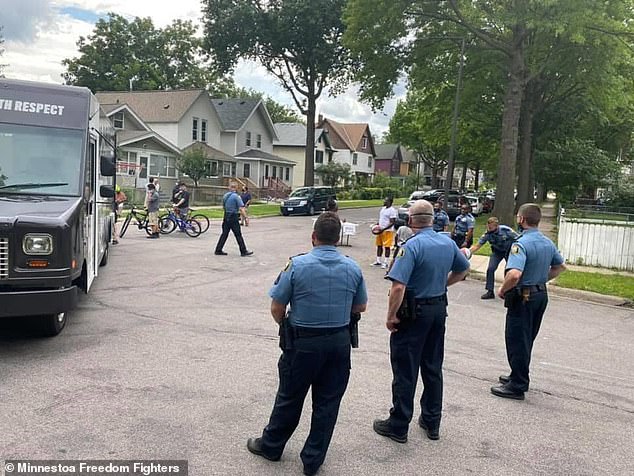 The Freedom Fighters are working with the Minneapolis precinct commanders, they say

‘We could not and still cannot allow destruction in the city,’ the 52-year-old said.

‘This is about filling the gap we see between police and community… It’s really about harm reduction.’

‘You just never know when something is going to happen. As a black man, I have the same rights as others to also carry a firearm and I do it, ‘ said another member Randy Chrisman.

He says that he has had a handgun permit for more than a decade and typically carries his gun with him when he goes out.

Chrisman explained that during the early days of the protests, he would leave his job in a restaurant and immediately drive toward the city to protect other businesses.

‘You have to be prepared to take action if needed,’ Chrisman said. ‘It’s something I’m ready to do. I don’t want to, of course, but I’m ready if needed.’

Romeal Taylor, 28, joined the group after seeing people who weren’t from the neighborhood destroying buildings and says he has carried a firearm with him anytime he goes out in public for the past six years. 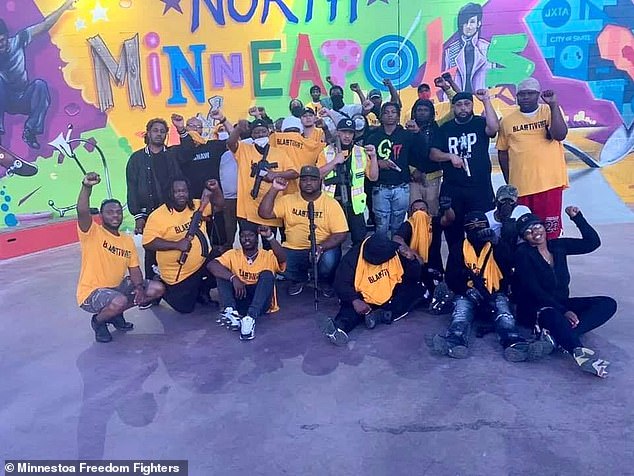 As well as patrolling, the group now holds community events in Minneapolis 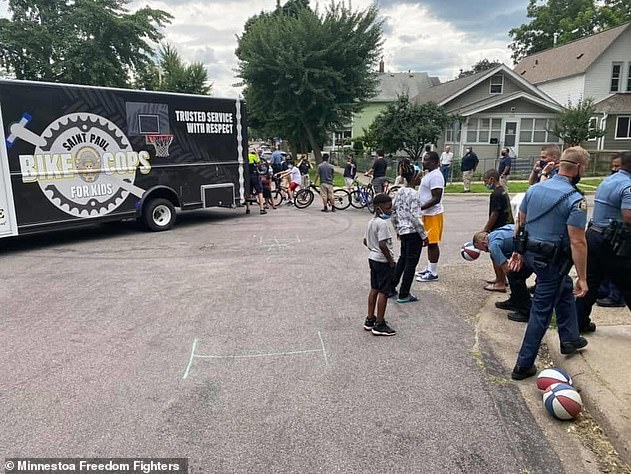 ‘These weren’t black folks,’ he said. ‘These were outsiders truly intent on destroying this city.

‘We are like any other American… We have the right to bear arms,’ added Taylor, who works as an overnight security guard.

According to Pew Research Center,  36 percent of white people nationwide own a gun, compared with 24 percent of black people.

‘There is a lot going on out here in the world. I would rather have a gun and not need it than need it and not have it,’ said Taylor.

‘We want to show all the good we can do for and in the community.’

As well as continuing to patrol in the north Minneapolis, the Freedom Fighters have also traveled to other protests where violence has erupted.

They said that they hope to deescalate situations and to work with authorities while making clear they are prepared to defend their communities.

Some members traveled to Louisville, Kentucky, where unrest has continued following the March death of 26-year-old black woman Breonna Taylor by police in a no-knock warrant.

They are among several armed black groups have sprung up across the nation as protests gripped the country. 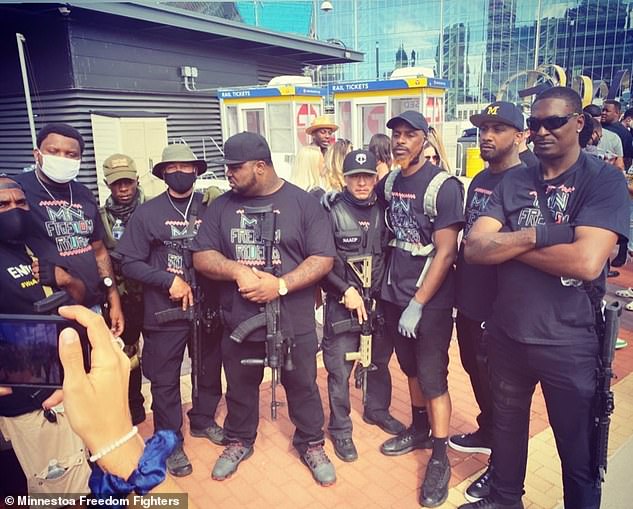 Members claim they become involved after seeing destruction to their community 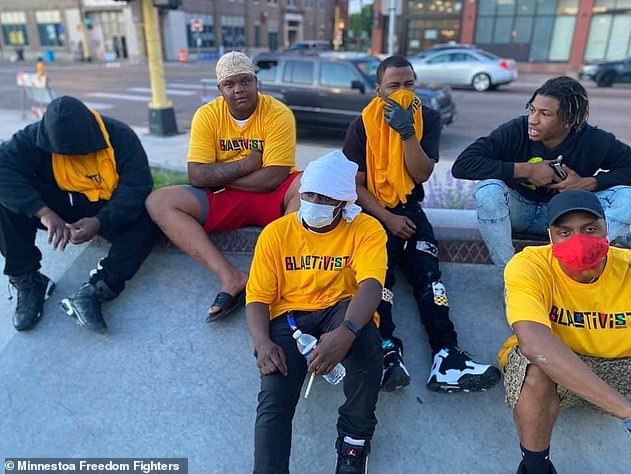 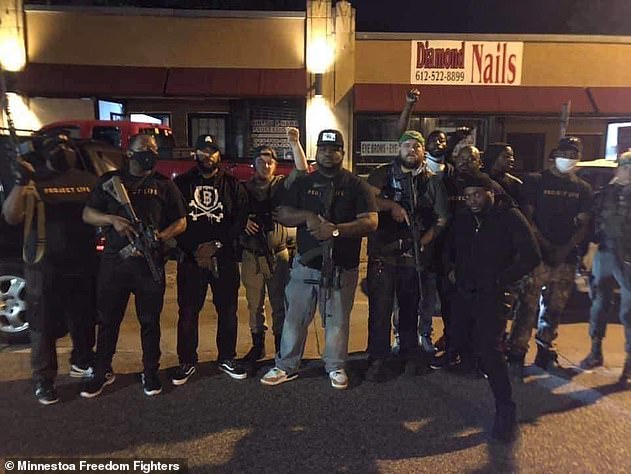 Others include the ‘Not F****g Around Coalition’ who descended on Brunswick Georgia in their hundreds following the killing of Ahmaud Arbery, a black man who was shot to death after being confronted by white men while out for a jog.

Some 1,500 members also gathered at Stone Mountain to call for the removal of Confederate monuments.

Elsewhere, groups have patrolled in Kenosha after the shooting of Jacob Blake, who was struck multiple times in the back during arrest in August.

As partisan politics became more heavily involved in the protests, there have been fatalities involving some of the self-styled civilian security operations.

Near Portland, Michael Reinoehl, 48, was killed by federal agents in August as they sought to arrest him for the suspected murder of a far-right activist.

Reinoehl has said he had acted to protect a companion when the man he shot attacked them.

In Kenosha, 17-year-old Kyle Rittenhouse is accused of killing two white men protesting. He was not arrested at the scene but later apprehended on homicide charges. His lawyer claims he acted in self-defense.

Members of the Freedom Fighters have said they are unsure what role they will play in the community in Minneapolis in the future but that they are certain there is a need for them to continue.

‘The misconception is that we’re scary black men with with big guns. We’re not,’ Jamil Jackson, the group’s commander, told MPR News.

‘We’re all professional men in our day jobs. We’re fathers and husbands, we’re uncles, we’re mentors. But at night and during times of need, we’re out doing what we need to do for our community.

‘It’s not about putting a gun in anyone’s face. It’s providing a layer of protection that our presence brings.

‘This isn’t about black men with guns versus white men with guns. This is about us taking a stance to patrol and protect our community. This is something that was asked of us during a time of unrest, and we saw that there was a need,’ Jackson added.

‘That sparked some purpose in some of these men’s lives to understand that their value was not just in protecting buildings that don’t belong to us, but also in protecting the people that actually live in the community.’

The Minnesota Police Department and Police Officers Federation of Minneapolis were contacted for comment but had not yet responded.