House prices nudged upwards to end 2020 at an all-time high of £253,374 in December, with homebuyers looking to return to London following an exodus last year.

The mini-boom that arrived after the property freeze at the start of lockdown led house prices to climb 6 per cent last year, with the average home adding £14,295 in 2020, according to Halifax.

Estate agents now predict a boom in sales in London in the wake of an exodus of City workers last year, who fled to work from homes in the countryside and on the coast during lockdown.

Dexters said it expects to see sales and lettings transactions London doubling in volume during 2021, with the boroughs of Camden, Kentish Town, Tufnell Park and Kensington and Chelsea tipped to be the year’s ‘star performers.’

And property expert Russell Quirk, who worked in the industry for some 25 years and founded the website eMoov, told MailOnline that demand from buyers for London – according to Rightmove and Zoopla data – is already gaining traction again.

Mr Quirk added: ‘I firmly believe homeowners and buyers will return to the Capital. While transactions in London in 2020 were down dramatically, demand has started to return from enquirers via the portals.’ 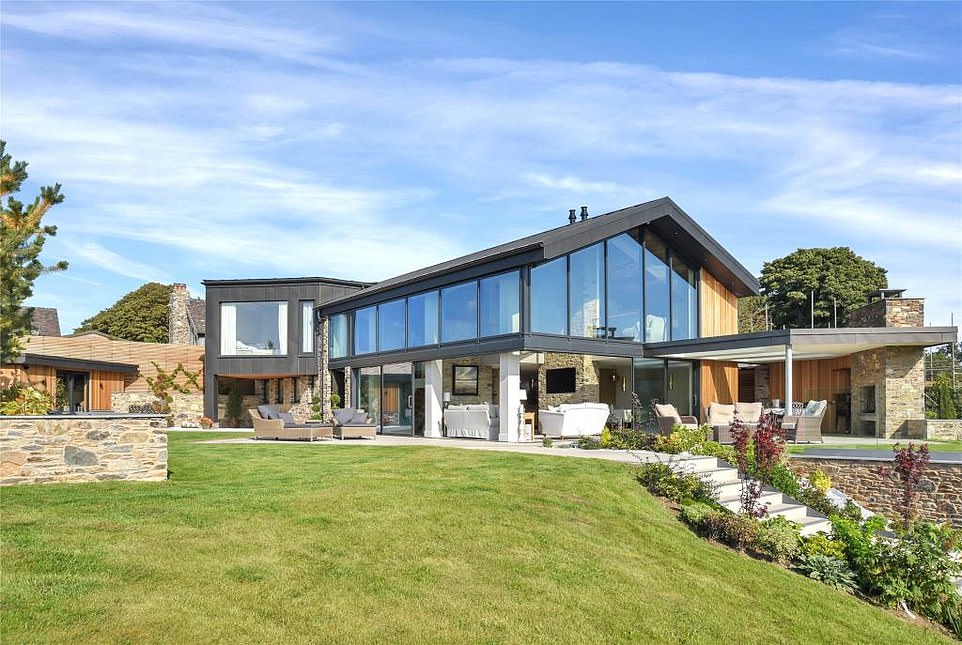 This four-bed home in Abbots Oak, Leicestershire is listed on Rightmove for £1.65m 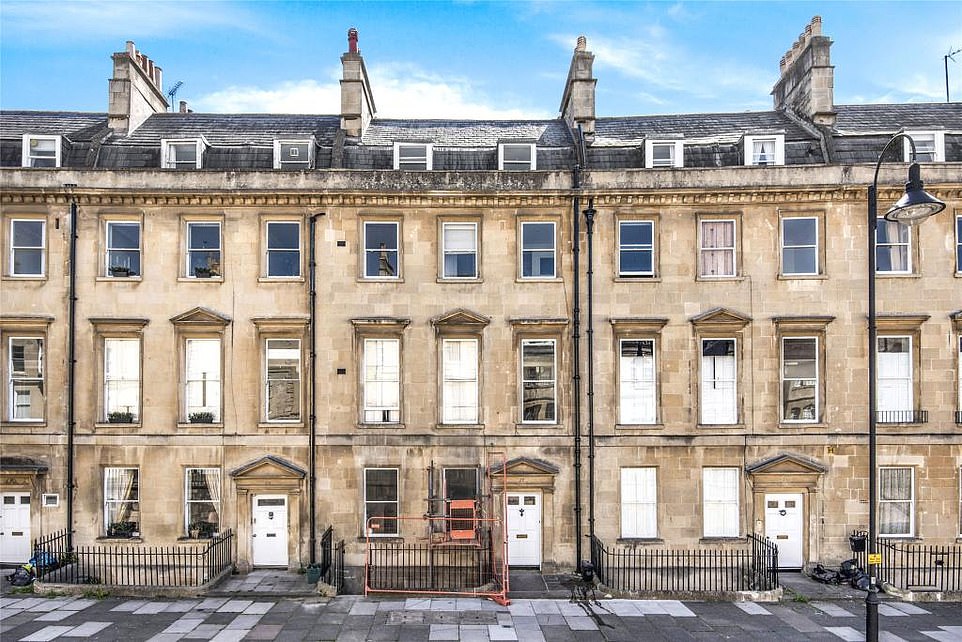 Rightmove is listing a two-bed apartment in this historic building in Bath for £450,000 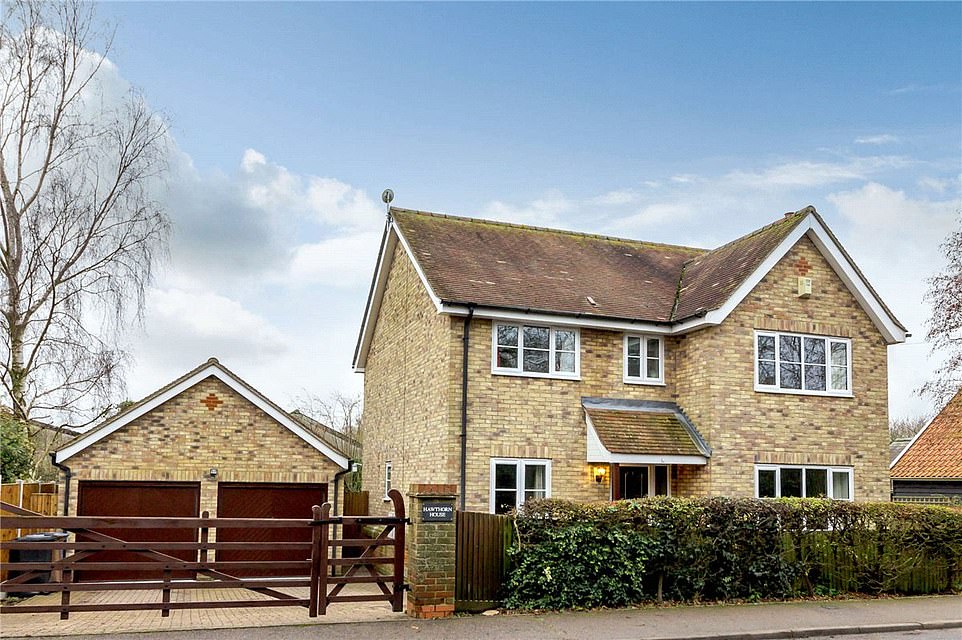 In Long Melford, Suffolk, this four-bed detached home is listed on Zoopla for £550,000 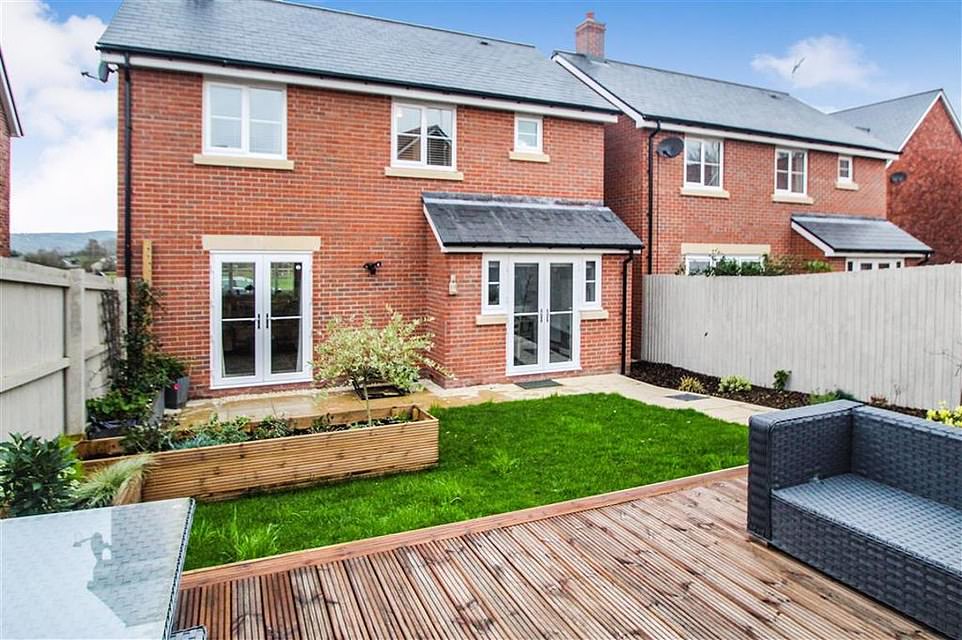 This three-bed detached home in Oswestry, Shropshire is priced at £250,000 on Zoopla

Dexters currently has over 100,000 people registered looking for a London home, as well as thousands of 2021 enquiries from international buyers looking to snap up homes in the Capital once overseas travel resumes.

Buyers are coming from Hong Kong and Saudi Arabia wanting to purchase ‘bolt hole’ homes, ‘due to concerns over the political and economic stability of their country,’ according to the estate agent.

He told MailOnline: ‘I think there is some data that shows there was a bit of an exodus, with several estate agents reporting more people moving out, than into London. But it has to be said that some of those reports are merely self-serving for firms.

‘There was definitely a sentiment for home owners that they didn’t need to be in the city and so close to their desks because of working from home; which I’m sure to some extent will remain a fairly robust sentiment for come City workers.

‘But that change of mindset will only ever be temporary.

‘I also think that, working aside, we are inherently social creatures and because of that there will be generally a return of wanting to come back to the office. The city centre will hopefully revitalise and the move towards living in the wilds of the countryside and working with a dodgy broadband will subside in time.

‘Some people suggest that Covid will change our ways and habits, but I think when we look back in a few years’ time, we will say that it was just a blip in history.

‘I firmly believe homeowners and buyers will return to the Capital. We must also look at the data – there is soft data that shows people are simply browsing homes out in the wilds. It is the hard data that shows actual transactions.’ 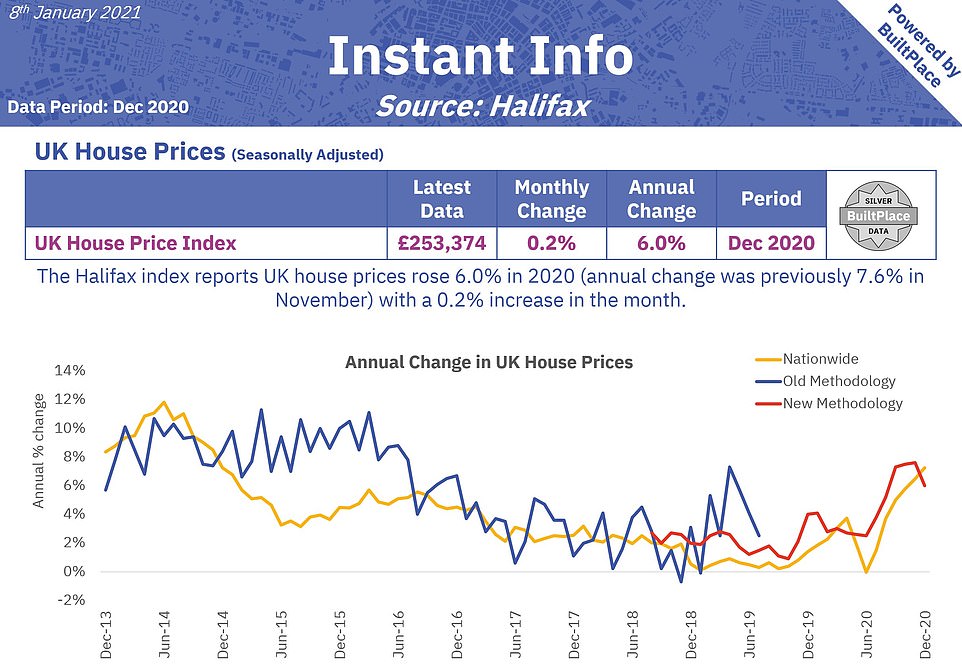 But according to Britain’s biggest mortgage lender’s house price index, the monthly rate of growth slowed to 0.2 per cent in December. This means that in real terms, the average house price increased by just £131.

Although it was the sixth consecutive month that a record price high had been hit, this month-on-month growth was a big fall from November’s 1 per cent, and suggests that the market is cooling down.

This is Money’s analysis of indexes for the year to November showed that the average house price across the major reports increased by 6 per cent, or £15,000.

Other than the North East, all regions of England surpassed their 2007 pre-downturn peak.

Halifax predicted that house prices would fall by between 2 per cent and 5 per cent by the end of 2021, although it admitted that forecast uncertainty was much higher than usual this year.

The 2020 increases were spurred on by the introduction of a stamp duty holiday by Chancellor Rishi Sunak in July that added to an already buoyant market, but this is due to end on 31 March unless the government opts to extend it.

Halifax also said the impact of the pandemic on people’s finances had been delayed by government support, but that unemployment would rise as the year continued.

Russell Galley, the managing director of Halifax, said: ‘While the economy should begin to recover in 2021, helped by the roll-out of Covid vaccines, the jobs market will inevitably adjust to the changes in demand that are occurring, and unemployment is expected to rise. 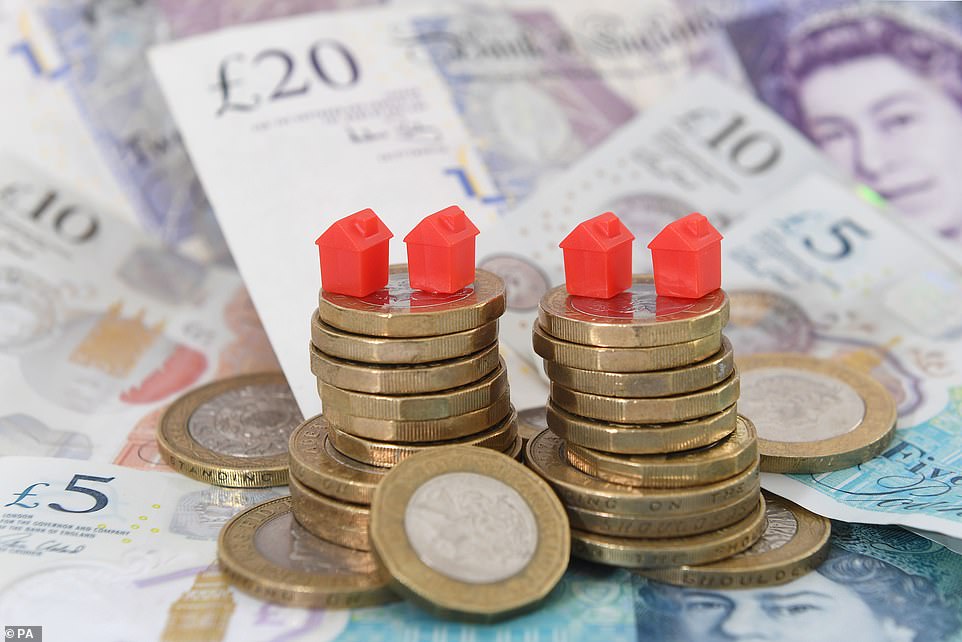 House prices increased in December 2020, but only by £131 as growth starts to slow down

‘With the stamp duty holiday also due to expire in March – and lower levels of demand – housing market activity is likely to slow.

‘Taking all of this into account, the post-summer surge in house prices is unlikely to be sustained.’

Even though prices are likely to fall, Galley says that they could end 2021 at the same place they started before the pandemic.

‘Prices are expected to fall by between 2 per cent and 5 per cent, although forecast uncertainty is much higher than usual given the current economic and political environment,’ he said.

‘It is also important to note that such a fall would only partially reverse the almost £18,000 (7.6 per cent) increase in average prices experienced over the past 12 months.’

Nick Barnes, head of research at estate agent Chestertons, predicted a smaller decrease in house prices in 2021 of 1.5 per cent.

‘There were 4 per cent more homes for sale in 2020 than the previous year compared to a more than 40 per cent rise in buyers. In London, Chestertons’ pipeline of deals at the end of 2020 was 53 per cent higher than a year ago and buyer enquiries were 49 per cent higher,’ he said.

‘Although the hangover from Covid-19 will be felt throughout 2021 and beyond, and despite the uncertainties following the UK’s departure from the European Union, the outlook for the residential market in 2021 is positive.’

Anthony Codling of property data platform Twindig said: ‘In 2020 house prices were subdued in the first half and strong in the second.

‘Will 2021 be a mirror image of 2020 a strong first half and a subdued second as the stamp duty Holiday ends and the possibility of increased capital gains tax on housing transactions takes the heat out of the housing market? Or will the vaccine cure Covid and heal our economy and keep the UK housing market-fighting fit? Time will tell, but for now, it’s onwards and upwards.’