All of Hong Kong´s pro-democracy politicians have resigned en masse after four of them were removed from power under new Chinese laws.

The city’s government ruled on Wednesday that Dennis Kwok, Alvin Yeung, Kwok Ka-ki and Kenneth Leung would ‘lose their qualification as legislators immediately’.

Hours after the four men were removed, the remaining 15 politicians from the legislature’s pro-democracy camp announced they would ‘resign en masse’ in solidarity.

The mass departure will leave Hong Kong´s Legislature with only pro-Beijing lawmakers – the first time since the city was handed back to China after being under British control since 1841. 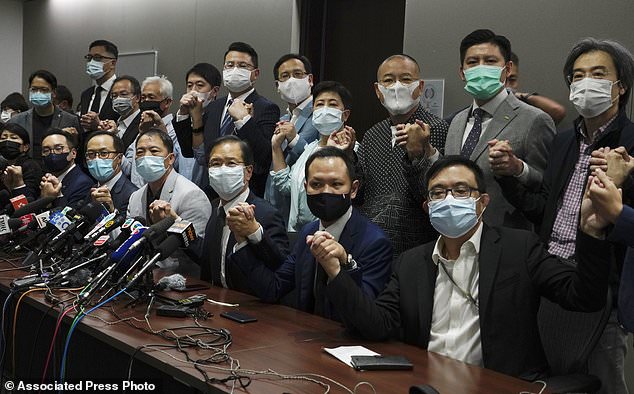 All of Hong Kong´s pro-democracy politicians have resigned en masse after four of them were removed from power under new Chinese laws. Pictured: Legislators pose for a photograph before a press conference making the announcement 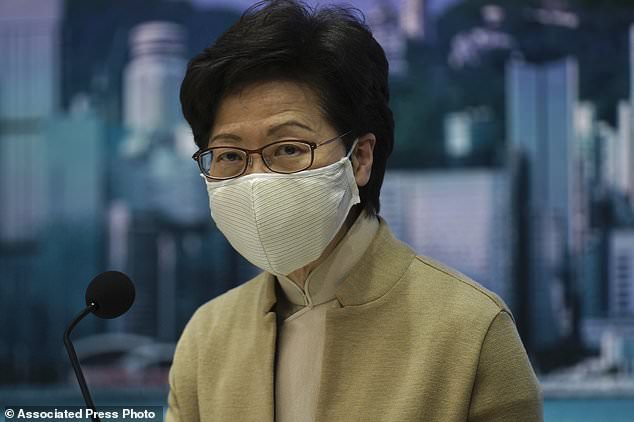 The pro-Beijing group already made up a majority, but can now pass bills favoured by Beijing without much opposition.

The move will also ratchet up tensions over the future of Hong Kong, which has long been a regional financial hub and bastion of Western-style civil liberties.

But it recent years China’s government has increasingly tightened its control over the city.

The lawmakers told a news conference they would submit their letters of resignation on Thursday.

Wu Chi-wai, the leader of the pro-democracy camp, told reporters: ‘Today we will resign from our positions because our partners, our colleagues have been disqualified by the central government´s ruthless move.’

During the news conference, the lawmakers held hands and chanted, ‘Hong Kong add oil! Together we stand!’

The phrase ‘add oil’ is a direct translation of a Chinese expression of encouragement.

Lawmaker Claudia Mo told reporters: ‘This is an actual act by Beijing … to sound the death knell of Hong Kong´s democracy fight because they would think that, from now on, anyone they found to be politically incorrect or unpatriotic or are simply not likable to look at, they could just oust you using any means.’

Under the new rules, lawmaker who supports Hong Kong’s independence, refuses to acknowledge China’s sovereignty over the city, threatens national security, or asks external forces to interfere in the city’s affairs should be disqualified. 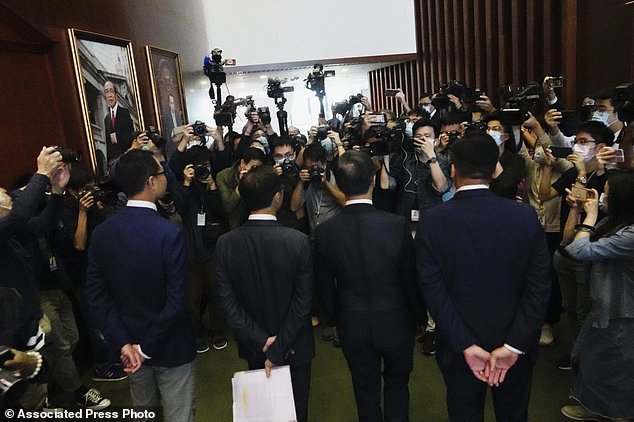 Four lawmakers, from left, Dennis Kwok, Kenneth Leung, Kwok Ka-ki and Alvin Yeung pose after a news conference at Legislative Council in Hong Kong after they were disqualified under new rules made by Beijing 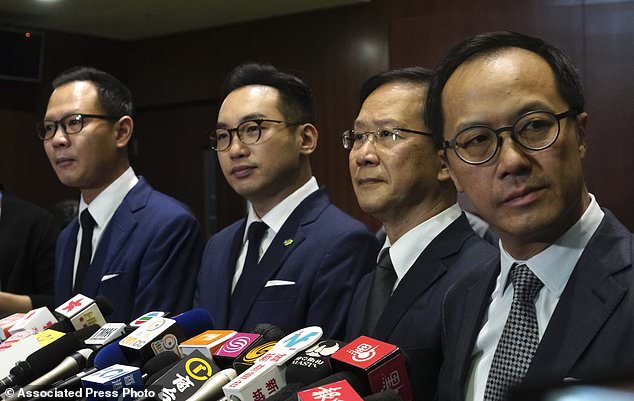 Dennis Kwok, Alvin Yeung, Kwok Ka-ki and Kenneth Leung were all disqualified from their role as lawmakers under the new legislation 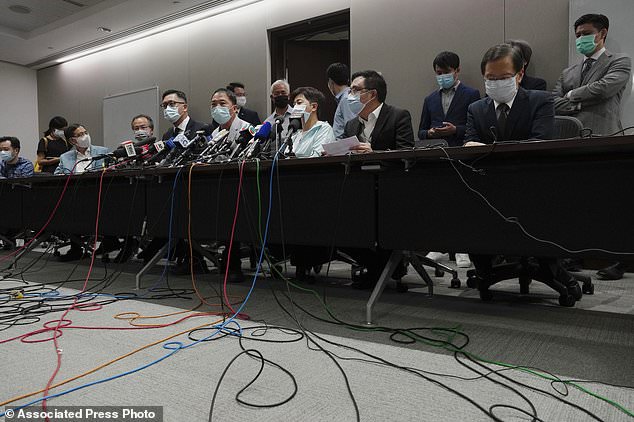 He said: ‘Beijing´s recent actions disqualifying pro-democracy legislators from Hong Kong´s Legislative Council leaves no doubt that the Chinese Communist Party (CCP) has flagrantly violated its international commitments under the Sino-British Joint Declaration and its promises to the people of Hong Kong, including those under the Basic Law.’

In recent months, Beijing has increasingly clamped down on Hong Kong, which it took back control of in 1997, despite promising at the time to leave the territory’s more open legal and economic systems intact for 50 years until 2047.

Beijing imposed a national security law in June that some have labelled draconian after anti-government protests rocked the city for months last year, and it has used it to crackdown on opposition voices.

In response, the U.S. levelled sanctions on several officials, including Hong Kong’s pro-Beijing leader, several Western countries have suspended their extradition treaties with the territory, and Australia and Britain offered Hong Kongers easier paths to settle in those countries.

Britain said on Wednesday that the decision to remove the lawmakers raises further concerns.

Beijing has rejected the criticism and lashed out at what it calls gross foreign interference in Chinese politics.

On Wednesday, Hong Kong’s leader, Carrie Lam, defended the lawmakers’ removal, telling reporters that legislators must act properly and that the city needs a body comprised of patriots. 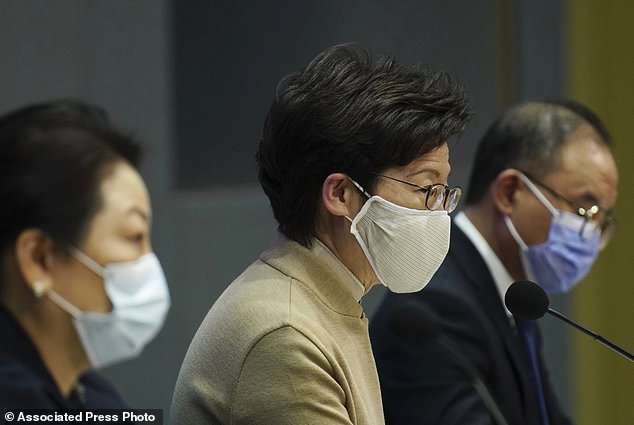 On Wednesday, Hong Kong’s leader, Carrie Lam, defended the lawmakers’ removal, telling reporters that legislators must act properly and that the city needs a body comprised of patriots 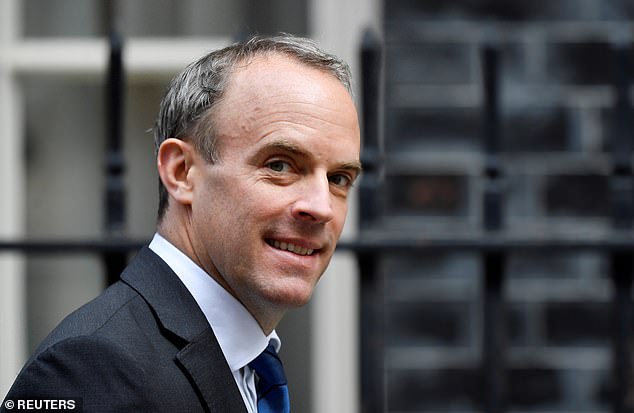 Still, Lam said that the Legislature would not become a rubber-stamp body, and that diverse opinion is welcome.

‘In terms of legality and constitutionality, obviously, from our point of view, this is clearly in breach of the Basic Law and our rights to participate in public affairs, and a failure to observe due process,’ Kwok, one of the ousted lawmakers, told reporters, referring to Hong Kong´s mini-constitution.

Earlier in the year, the four lawmakers were barred from seeking reelection in a vote originally scheduled for September – but remained in their posts.

They were disqualified over their calls for foreign governments to impose sanctions on Hong Kong and Beijing.

The government eventually postponed the planned September election by a year, citing the coronavirus, but the pro-democracy camp criticized the move as an attempt to block them from taking a majority of seats in the Legislature – which was a possibility in the coming election.

Chinese Foreign Ministry spokesperson Wang Wenbin said that the disqualification was necessary to maintain rule of law and constitutional order in Hong Kong.

At a news conference on Wednesday, Wang said: ‘We firmly support the (Hong Kong) government in performing its duties in accordance with the Standing Committee´s decision.’