How could the Government toughen England's third coronavirus lockdown?

How much TOUGHER could lockdown get? Masks worn OUTSIDE, nurseries shut and support bubbles BANNED… strict new curbs that could become law as MPs battle to contain outbreak

From forcing people to wear masks outside to closing nurseries, the Government has a range of options to toughen England’s third national lockdown.

Other possibilities include banning support bubbles, stopping people exercising with another person and closing places of worship again.

Vaccines minister Nadhim Zahawi today raised concerns that people were not complying with the rules closely enough in supermarkets and when exercising.

There are mounting suggestions that the restrictions may need to be toughened as the Government launched a drive to ensure the public abide by the rules.

Prime Minister Boris Johnson is said to have discussed the prospect of introducing tougher controls to ensure the public abide by the restrictions.

And England’s Chief Medical Officer Professor Chris Whitty today urged the public to ‘stay at home unless you absolutely have to’ go out.

Health Secretary Matt Hancock has warned that ‘every flex can be fatal’ as he backed more stringent enforcement of the lockdown by police yesterday.

Here, MailOnline looks at some of the possibilities for toughening the lockdown: 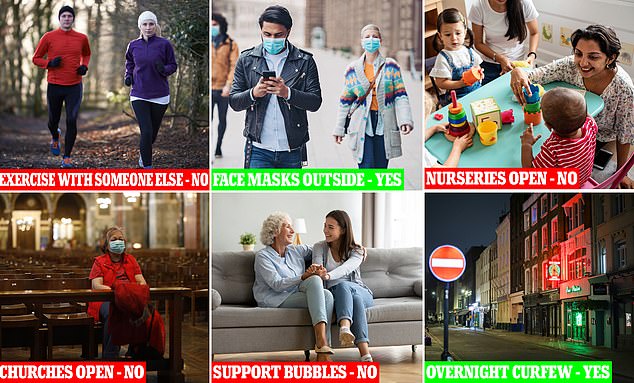 Leave the house once once a week?

The current exercise regulations for England mean you can go out once per day for as long as you want to take part in exercise by yourself or with one other person.

However the Government fears the new lockdown rules are being exploited by people to meet up with friends for a coffee or an alcoholic drink in the park.

It is currently illegal to meet ‘socially’ with people – and you cannot leave your home ‘for the purpose of recreation or leisure; eg a picnic or a social meeting’.

But the regulations could be toughened to stop people seeing others outdoors – similar to the opening few months of the first lockdown in March last year.

A Government source told the Daily Telegraph: ‘At present people are using the exercise exemption of lockdown to basically go and socialise with friends.’

A further restriction could be that exercise is limited to just one hour per day to reduce the number of people someone might come into near contact with.

A source has even suggested to MailOnline that outdoor exercise could be limited to only once a week, although this would be difficult to enforce if people could say they were going out for essential shopping.

Chief Medical Officer Professor Chris Whitty, told BBC Radio 4 this morning that fleeting contact with someone, such as a jogger running past, is ‘extremely low risk’.

There is no currently limit on what time of the day people are allowed out of their homes for exercise or other activities permitted under law during the lockdown.

But a curfew is one measure which could be considered to reduce the opportunities for people to meet – and has so far not been ruled out by Boris Johnson.

There would likely be exemptions for key workers travelling to and from work, but public transport could be reduced during the curfew hours to discourage journeys.

The closest Britain has come to a curfew so far is the 10pm pub and restaurants opening limit, which was later extended to 11pm with last orders taken by 10pm.

Other countries in Europe already have curfews in place, such as France where it is active from 8pm to 6pm but starts two hours earlier in Marseille and Strasbourg.

Calls for nurseries across the country to close along with primary and secondary schools have been led in recent days by Labour leader Sir Keir Starmer.

Most infected children display no symptoms of coronavirus and Chief Medical Officer Chris Whitty said today that the risk to children ‘is very low’.

But Sir Keir said nurseries ‘probably should be closed’, adding: ‘I think there is a case for looking at nursery schools, we’re talking to the scientists about that.’

Nursery industry body Early Years Alliance has urged the Government to explain how nurseries can be safe while primary schools must remain shut.

Schools are currently only open for vulnerable pupils and the children of key workers, and there is a possibility this could be extended to nurseries.

However Cabinet Office minister Michael Gove has insisted that it was important to keep nurseries open so children’s parents can still work.

Return to queuing outside supermarkets

Shoppers face a return to long queues outside supermarkets under plans for a new crackdown – while further stores deemed non-essential could be shut.

Ministers have ordered local authorities to place limits on the number of people allowed into shops at any one time amid fears they could become virus hotspots.

Concerns have already been raised over shoppers going to some stores for non-essential products, such as shopping at Homebase for plants or M&S for clothing.

A Whitehall source suggested there could be a return to capacity limits, saying: ‘There is a feeling that people have just gone back to doing whatever they want.’

Enforcing the wearing of masks outside

Face masks are mandatory indoors on public transport and in churches and shops unless you have an exemption, but this rule could be extended to outdoor settings.

London Mayor Sadiq Khan urged the Government last Friday to make masks compulsory ‘outdoors when in queues, streets and other crowded spaces outside’.

He said: ‘If people, for example, are crowded together in a queue … if they’re really huddled together around a market stall or something, that is a risk with this virus.

‘And people in that situation, there might be some logic to people thinking about wearing masks, but a much better thing to do is to minimise going out.’

Support bubbles were first introduced in England on June 13 last year, meaning that adults who live alone can visit someone else’s home and stay overnight.

These were prompted following concerns for the mental health and isolation of those living alone, and were not in place for the first three months of lockdown.

However the Scientific Advisory Group for Emergencies advised against their introduction last May – and the Government has not ruled out removing them again.

But scrapping them would likely be a deeply unpopular move, especially among those rely on them as a vital source of contact, such as a single elderly grandparent.

The Government advises that bubbles are formed with a local household, and those who have a child aged under one as of December 2 last year count as single adults.

People are also allowed form a support bubble as a single adult if they are aged 16 or 17 and are living with others of the same age and without any adults.

One of the more surprising elements of the third national lockdown is that places of worship were allowed to remain open for private prayer and collective worship.

It is a rare example of gatherings involving multiple households which are still allowed, and a different policy from the ban during the previous two lockdowns.

But London Mayor Sadiq Khan and council leaders have called for places of worship to close again, and this pressure could lead to the Government changing its policy.

The Scientific Advisory Group for Emergencies has suggested closing places of worship could reduce the ‘R’ rate by 0.1, but Ministers are reluctant to do this.

Cabinet Office minister Michael Gove said: ‘It’s absolutely vital that traditions of public worship can continue. I think it’s a very important part of the life of the nation.’

Religious leaders have urged people to take ‘tremendous care’ if going to a place of worship and advised those shielding to stay at home as the pandemic intensifies.

Meanwhile some vicars have criticised the Church of England for not taking a harder stance on closures, saying that it ‘doesn’t make sense’ for churches to stay open.

Ministers are said to be considering bringing in rules requiring people to wear masks in workplaces as well as schools.

Government advice currently states the best ways to minimise the risk of getting the virus at work are social distancing, good hygiene and protective screens.

But Communities Secretary Robert Jenrick said last October that masks ‘have some benefit’ at work and suggested the Government should take this into consideration’.

However if this rule was brought in now, it would only affect a low proportion of the country still in offices – with people urged to work from home if they can.

The Department of Health and Social Care has said it is guided by advice of scientific and medical experts and keeps the evidence on masks ‘under constant review.’

Around one third of the UK workforce are key workers totalling 10.61 million people – including NHS staff, food manufacturers, building workers and warehouse workers.

Other key workers include staff needed for ‘essential financial services provision’, ‘payments providers’ and those in ‘information technology and data infrastructure’.

But scientific advice group Independent Sage has called on the Government to narrow the definition of key workers in a bid to reduce numbers of pupils in school.

Calls to limit numbers of pupils receiving face-to-face lessons are growing as attendance levels surge to more than 50 per cent in some schools.

But all key workers unable to work from home will soon be eligible for a test twice a week to try to ‘break the chain’ of transmission by asymptomatic carriers.

The announcement yesterday by Matt Hancock will make lateral flow tests – which take 30 minutes to get a result – a key way to avoid tightening the lockdown.

Key workers have around 29 daily contacts with other people, seven times as many as someone working from home. Just one in six key workers can work from home.

Health Secretary Matt Hancock has warned that ‘every flex can be fatal’ as he backed more stringent enforcement of the lockdown by police yesterday.

Police have been fighting to keep Britons from flouting the rules as thousands flocked to beauty spots at the weekend despite warnings over a stricter crackdown.

Officers have been told to issue a verbal warning before fining those in breach of the rules £200 as Home Secretary Priti Patel warned they won’t hesitate to take action.

Police chiefs have urged the public to be more responsible and to stop trying to find a way around the rules, but enforcement could still become tougher still.