It was 10 days of grinding physical exercise as they traversed the top of the world. The trail ran through monkey and banana tree tangles, then rice fields, canyons and into the Himalayas. They rose at dawn. They ate only lentils and drank only water. 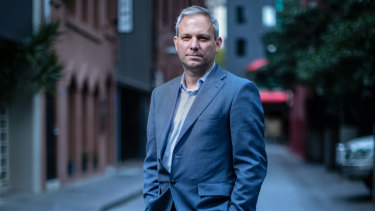 “There were long periods of silence,” remembers one of the students, Damien Holdaway. “It was very simple, very elemental. It was extraordinary, and it was very Brett. That was the closest I ever got to Brett Sutton.”

For Holdaway, it was “the only time I've done anything like that in my entire life”. Sutton, on the other hand, went on to complete 10-day meditation retreats in total silence, including “positioning discomfort” for five or six hours at a time.

Says Holdaway: “He was always drawn to the big picture. Always trying to work out our place in the world. He was born old.”

As a doctor, Holdaway was drawn to the “intensely personal and critically important moments” in the treatment of individuals. Today he is a leading vascular surgeon in Geelong. 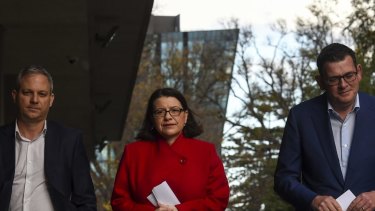 His friend Brett Sutton was different. He went into emergency medicine, then worked in the developing world before being drawn to public health, “the science and art of preventing disease, prolonging life, and promoting physical health … through organised community efforts,” in the words of one of the field’s founders, Charles-Edward Winslow.

Today, at 51 years old, Sutton is Victoria’s Chief Health Officer, with power over our liberty and our lives.

Like public health officers around the world he has been at the centre of political dispute, and has entered the public psyche as a hero and, to some, a villain. You can buy Brett Sutton mugs and doona covers. He has several passionate fan clubs on Facebook. You can also find memes of him with devils’ horns.

Meanwhile, the government and the citizenry, by heeding his advice, on Friday saw Victoria notch up 28 days with no new cases, technically eliminating the virus from the state. 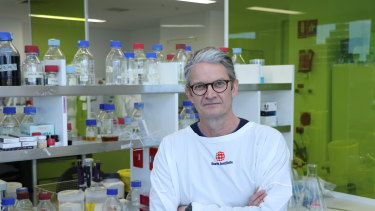 If, like his predecessors in the CHO position, Sutton falls victim to politics and blame games, it seems likely to spark a revolt in the medical community. There, it is hard to find anyone who has a bad word to say, and none of the many people contacted for this article doubted his integrity.

Brendan Crabb, director of the Burnet Institute, thinks few people understand the immensity of what Sutton has been through – a relatively new CHO in a relatively junior position “hit by the train” of the pandemic.

With Victoria so far the only state to suffer a second wave, he has been relatively isolated and under party-political attack from the state opposition and the federal government. “To be able to say after all that he's consistent and calm and trusted and modest and respectful and clear is incredible … I know I couldn't be that person.” Crabb’s comments are typical of what other members of the medical community say about Sutton.

But the politics inside the DHHS is clearly much less friendly. Evidence before the Hotel Quarantine Inquiry shows that Jason Helps felt Sutton had “distanced himself” from the hotel quarantine operation when the blame game began. Helps “had concerns” about Sutton’s claims not to have known about the use of private security companies. Sutton has stuck to his assertion that he was sidelined. This is supported by an email he wrote in mid April protesting that the scheme had been set up without his approval or input, that the exclusion of the public health team was “astounding” and that it was being run as a logistic exercise rather than a health program. “This is a source of unease – moral and legal,” he wrote. But even if Sutton had known about the use of private security, it probably wouldn’t have changed things. The problems with that workforce were not on anyone’s radar at the time.

Behind the scenes, Andrews has been heard expressing frustration with Sutton, and news of this has leaked.

But a source with direct knowledge of the situation says the tensions have not been over fundamental matters, but rather, in the daily stress, the Premier’s perception that Sutton has not always helped with consistency in messaging on coronavirus restrictions, and has sometimes been underprepared on the detail.

There was also the time Sutton offered to speak personally to the Afghan community in the south-eastern suburbs after a COVID-19 outbreak, saying he had “been to Afghanistan a couple of times”. Andrews was unimpressed. He had been at pains not to single out ethnic groups, and the Afghan community felt targeted. Sutton later apologised.

But none of those involved knew Sutton well enough to understand what lay behind his lightly mentioned “couple of visits” – or how central they were to his identity and sense of mission. On graduation, Sutton spent 10 years working in emergency medicine in various hospitals, with a long stint in north-western Tasmania. This was interspersed with travel, and work for Medecins Sans Frontieres, starting in Afghanistan. Sutton met his wife, Kate Sutton, in Afghanistan. She was also a humanitarian worker and today is the founding co-director of the all-female NGO the Humanitarian Advisory Group.

His mother, Ann Sutton, was terrified when Sutton went to Afghanistan. On his first visit, the Taliban were still in power. On his second, they had just been overthrown by the US. There were landmines and accounts of awful injuries.

“He would say to me, ‘there’s nothing I can do’,” she recalls. Holdaway says Sutton told him how his team would arrive in a village and gather everyone together, then sort them into groups by calling out symptoms – those with diarrhoea in one corner, with coughs in another, detecting who had dysentery and tuberculosis. In the advanced TB cases, Sutton would have to take the patients into a corner and give them the hard message. “You are going to die and there is nothing we can do.”

“It was gut-wrenchingly honest,” says Holdaway. Sutton acquired “the kind of perspective that never leaves you. He doesn’t get caught up in First World problems”. Work followed in the refugee camps in Africa, and in East Timor. It was this work that turned him from emergency medicine to public health. 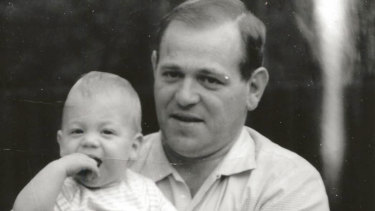 Brett Sutton with his father, Terry Sutton, pictured in 1970.

Sutton, says Ann, was a quiet and thoughtful child with a quick wit. Two events formed him. The first was the sudden death of his father, Terry, from a stroke when Brett was nine years old. For 18 months he refused to speak about his dad. “It was as though he hadn’t had a father,” she recalls. She consulted the family GP, who said her son was displaying the signs of profound shock.

The second formative event was work experience with a vet. Sutton was convinced that this would be his future career, but the vet was a specialist in racing greyhounds. Sutton was given the job of carrying corpses to the incinerator. “He was very upset by that,” Ann recalls.

It reoriented him to human medicine.

Sutton has been in regular contact with Ann in recent weeks. He has told her that things within the department have been “difficult” but that his public health team has been solidly behind him. He said there were “no problems” in his relationship with Andrews, other than the Premier being “very stubborn” in rejecting Sutton’s advice to get more rest.

Whatever the passing tensions between the two men, Andrews' actions have shown enormous faith in Sutton and the public health team. The Premier has followed their advice to the letter – at considerable political cost, and including when there have been conflicting views among experts.

Sutton’s advice also guided Andrews’ stance in national cabinet in the early days of the pandemic, when he was head to head in pressing an initially reluctant Prime Minister for urgent action.

Asked for comment for this article, Andrews said: “Every step of the way the government’s decisions have been guided by … the Chief Health Officer and his public health team. We’ve had to make some incredibly difficult decisions this year – and we thank Brett and his team for working with us to get Victoria to the other side.”

Sutton has made it clear that he loves his job and wants to keep it. There are big challenges ahead. He has repeatedly spoken about the huge public health challenges that will be caused by climate change, for example.

But the medical community is far from confident that the deeper structural and funding problems with public health in Victoria will be resolved.

The findings of the hotel quarantine inquiry will land just before Christmas. Many expect the DHHS will be split up. The department is in agonies of anticipation. The secretary, Kym Peake, resigned earlier this month.

Perhaps the CHO position will be elevated. Or perhaps Sutton, like his predecessors, will fall victim to the politics.

Last Sunday, Sutton was with the Premier as a further liberalisation of restrictions was announced, including a lifting of the requirement to wear masks outside.

Victoria’s medical community is hoping this is the most serious dispute between them.