Doctors and vaccine researchers have observed a significant rise in vaccine hesitancy among older patients following suspected incidents of a rare clotting condition associated with the AstraZeneca vaccine in Australia.

A leading immunisation expert says confidence in the AstraZeneca vaccine appears to have taken a “huge hit” among older Australians amid reports of thrombosis among people who have received the jab. 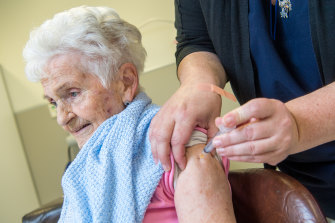 Valda Petersen is given her vaccine by registered nurse Denise Touzel at the Westcare Medical Centre this week.Credit:Justin McManus

Many doctors say they have noticed a dramatic reduction in the number of patients aged over 70 – who are among the earliest recipients of the vaccine – booking appointments for immunisation against coronavirus at their clinics, leaving some with hundreds of unused doses each week.

Professor Margie Danchin, who tracks COVID vaccine uptake for the federal government, said data indicated high levels of intention to vaccinate among Australians aged over 70 before reports of extremely rare clots associated with the AstraZeneca vaccine emerged this month.

“We collected our surveys a few weeks before the whole AstraZeneca situation really exploded in Australia,” Professor Danchin said.

“Now we are hearing, through multiple qualitative research, through focus groups and people we are speaking to on the ground, including GPs and nurses, there’s been a huge hit to confidence in the last few weeks.”

Professor Danchin, who leads seminars for GPs on how to handle conversations around vaccine hesitancy, is working with researchers and peak medical groups, including the Australian Primary Health Care Nurses Association and the Royal Australian College of General Practitioners, to collect data and analyse the true extent of vaccine hesitancy among Australians.

“The data that reflects what’s happened in the last three weeks will come,” Professor Danchin said.

“But in terms of speaking to people on the ground, people delivering the vaccine, even the patients themselves, all the impressions suggest hesitancy has risen significantly.”

Weeks ago there was huge demand for the coronavirus vaccine at Westcare Medical Centre in Melton in Melbourne’s outer west, but GP Alastair Stark said bookings for the jab had plummeted as reports of the extremely rare complication dominated headlines.

“People were coming from everywhere to try and book us, but now appointment bookings have died right down,” Dr Stark said.

“Every patient is asking about blood clots. We are only vaccinating those over 70 and even the 80-something-year-old patients are asking about blood clots. They’re saying things like ‘I had a blood clot when I was 50 – does that matter?’ Or, ‘I’ve got varicose veins, does that mean I am at greater risk?’ They see the reports on the news and hear it from the Prime Minister. All they know is that the vaccine causes blood clots and it sticks in their minds.” 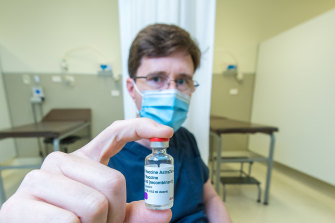 The clinic receives about 400 doses of the coronavirus vaccine per week and while flu shots are booked out until the end of May, hundreds of doses of AstraZeneca are expected to be left in the fridge this week.

RACGP Victorian chair Anita Munoz said doctors across the state had been anecdotally reporting increasing rates of vaccine hesitancy among patients of all ages in the past three weeks.

“There is indication from GPs that older groups are in particular more hesitant about the vaccine,” Dr Munoz said.

The Melbourne GP suspected the almost daily media reports on the blood-clot risk, which has been estimated to be as low as one in 200,000 by some experts, was giving the impression the extremely rare side-effect was more common than it truly was.

“The fact that the side-effect is much less likely in older populations doesn’t necessarily come out as a key message,” she said. “And, because we have more or less a COVID free environment at the moment the risk is perceived as much lower than it would be, for example, for a person over the age of 50, who was living in India.”

There have been six cases confirmed cases of thrombosis with thrombocytopenia linked to AstraZeneca, including a man in his 80s and a woman who died in NSW prompting the country’s vaccine advisory group to recommend people under the age of 50 get a different vaccine.

Two recent blood-clotting deaths that emerged on Thursday do not appear to be linked to the AstraZeneca vaccine. Therapeutic Goods Administration head John Skerritt said the cases were still under investigation, but current evidence did not suggest the deaths were linked to the vaccine.

Altona GP Mukesh Haikerwal said his medical practice had also observed a drop in vaccine bookings in the past fortnight, driven by “confusion, people not having their concerns about the risks of AstraZeneca alleviated and GPs not having the supply to vaccinate them”.

“It’s a combination of all those things,” said Dr Haikerwal, a former president of the Australian Medical Association.

Dr Stark said a “major shift in the narrative”, which highlighted the benefits of being vaccinated against COVID-19, was needed to boost uptake in Melbourne’s outer-western suburbs, particularly among people in lower socioeconomic pockets, who face greater barriers to healthcare.

“It is relatively easy to discuss these concerns with elderly patients when they come in and explain that complications with this vaccine are really, really exceedingly rare and that the benefits far outweigh the risks of being infected with coronavirus for them.

“Generally patients are then happy enough to go ahead with their vaccine once you weigh up the risks with them. But it is reaching the people who aren’t even booking in to get their vaccines that I’m most worried about.”

Older Australians expressed they were motivated by “a desire travel and were used to accepting risks for other medical interventions,” Dr Attwell said.

Concerns over vaccine hesitancy in Victoria come days after it emerged elderly people, who are too frail to travel to mass coronavirus vaccination hubs, were being put on vaccine waiting lists stretching out to September by their general practitioners.

Meanwhile, Melbourne’s mass vaccination centres continue to operate at a fraction of capacity, while some clinics continue to battle supply issues, saying they are quickly exhausting their weekly allocation of vaccines doses.

Former Australian Medical Association national president Tony Bartone believes Victoria’s focus on mass vaccine centres was hindering its rollout among the elderly, who want to be vaccinated by their GPs and are most in danger of severe illness and death if they are infected with coronavirus.

“If GPs had more vaccines we wouldn’t be talking about the slow rollout and that’s the bottom line,” Dr Bartone said. “The mass vaccination hubs only create another opportunity for logistical division of a small supply of vaccines.”

But Health Minister Martin Foley said it was clear the expansion of immunisation centres in Victoria was “showing real results” with the state’s vaccine numbers surpassing NSW for the first time on Thursday.

“Victoria has now delivered 202,506 doses through our state-run health services,” Mr Foley said. “Thirty thousand of them since the doors of the high-volume vaccination centres were opened for bookings and walk-ins.”

A Victorian health department request to the Commonwealth to redistribute its two-week allocation of 52,000 doses to GPs instead of mass vaccine hubs appears to have been successful.

A federal government health spokesman said the department was undertaking an analysis to review available AstraZeneca doses for primary care vaccination sites, including working directly with state and territories and Primary Health Networks to re-distribute any available allocations upon request.

“Allocations may be targeted to areas where demand exceeds supply for priority populations,” he said.

On Thursday, 246 people were asked to retest for COVID-19 after “strong and unexpected” coronavirus fragments were detected in waste water in Melbourne’s west and north-west.

The Health Department said the people included four primary close contacts of a man who flew from Perth with the virus last week. Others were recently returned travellers from interstate red and orange zones.