Texas: Houses were flooded, industrial buildings were demolished, and a teenage girl was killed when a tree fell on her home as Hurricane Laura tore through parts of Texas and Louisiana overnight.

The category 4 hurricane made landfall around 1am on Thursday morning (local time) with winds of up to 240 kilometres per hour, in what was one of the most powerful storms to hit the Gulf Coast in decades. 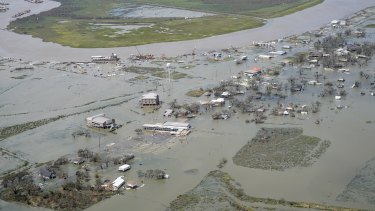 Buildings and homes are flooded in the aftermath of Hurricane LauraCredit:AP

While four deaths have been recorded so far, governors from the two affected states said the impact was not as catastrophic as expected, largely due to the mass evacuation of thousands of people in the days leading up the event.

A 14-year-old girl was the first reported fatality on Thursday morning, dying when a tree fell on her home in Leesville, Louisiana, which is more than 160 kilometres inland. A further three deaths were later confirmed in the parishes of Vernan, Jackson and Acadia.

US President Donald Trump received a briefing from the Federal Emergency Management Agency today, later saying that he had considered postponing his planned speech at tonight’s Republican National Convention but “it turned out we got a bit lucky.”

“It was very big. It was very powerful. But it passed quickly and so everything's on schedule,” he said. 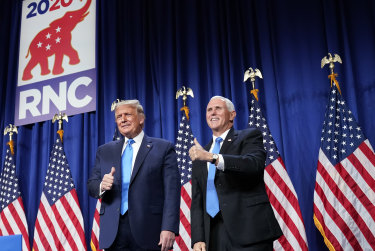 Authorities are continuing to assess the damage, but so far utility companies have reported more 500,000 people across Texas and Louisiana with power outages; highways have been blocked by fallen trees; and a chemical fire broke out at the BioLab plant in Westlake, resulting in warnings to residents to remain indoors until further notice.

"If you are in the Westlake/Moss Bluff/Sulphur area, shelter in place, close your windows and doors and TURN OFF YOUR AIR CONDITIONING UNITS,” Louisiana Governor John Bel Edwards tweeted. “There is a chemical fire. Stay inside and wait for additional direction from local officials.”

Fears about the impact of Hurricane Laura intensified this week, after the National Hurricane Centre warned that the storm surge could be “unsurvivable” and would affect townships as far as 64 kilometres inland.

Many residents chose to flee, particularly in the storm’s path, such as the Lake Charles region of Louisiana and Port Arthur in Texas. 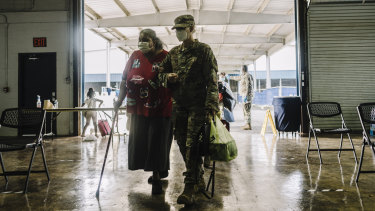 People gather at the Burton Complex, an event center in Lake Charles, to evacuate the area ahead of Hurricane Laura.Credit:New York Times

Thousands of hotel rooms were made available for people in need, a tactic first used when Hurricane Hanna hit Texas in July.

However, coronavirus added a logistical challenge: due to social distancing requirements, the number of buses taking people out of the area had to be increased, while some residents chose not to go to emergency shelters because of health concerns.

In the end, the impact was not as bad as initially feared, but authorities warned people not to be complacent. 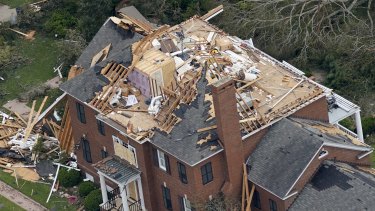 A home in Lake Charles, Louisiana after Hurricane Laura passed.Credit:AP

"Even as we're speaking right now, the storm continues to rip through east Texas. And so Texans are in danger," Texas Governor Greg Abbott told CBS this morning.

"They need to continue to take cover as tornadoes and heavy storms are ripping through there. East Texas has many tall trees, many of which have been downed already. People need to be very vigilant still as we are speaking.”

The Hurricane made landfall near the small town of Cameron, Louisiana around 48 kilometres from Texas.

Hours before it hit, Vice President Mike Pence used his acceptance speech at the Republican National Convention to urge residents to stay safe, and vowed that the Trump administration would “be with you every step of the way”

“Our administration is working closely with authorities in states that will be impacted. FEMA has mobilised resources and supplies for those in harm’s way. This is a serious storm, and we urge all of those in affected areas to heed state and local authorities,” Pence said.