An Afghan man cut off his wife’s nose with a kitchen knife after she asked for a divorce, officials said on Friday, amid a surge in domestic violence triggered by the coronavirus lockdown.

The mother of a seven-year-old boy was trying to leave her abusive husband, who had prevented her from moving out of their house in the southwestern province of Paktika, said Khoshboo Maidanwal, head of the provincial women’s affairs department.

The attack on the 24-year-old victim happened earlier this month and police arrested the husband this week. The woman was sent to her father’s home after treatment.

An Afghan man cut off his 24-year-old wife’s nose with a kitchen knife after she asked for a divorce, officials said on Friday (file image)

‘Her husband hit her and chopped off her nose with a sharp kitchen knife,’ she said. ‘She wanted a divorce because he abused her and beat her frequently.’

Maidanwal said her office has registered 13 violent cases of domestic abuse in the past two months.

‘The lockdown due to the coronavirus has made domestic situation even worse for women,’ she said, adding that one reason behind the increase could be that more women are reporting abuse.

Rights groups estimate that more than half Afghan women face domestic abuse at some point in their lives.

Afghanistan has recorded a total of 6,053 confirmed cases of coronavirus and 153 fatalities. 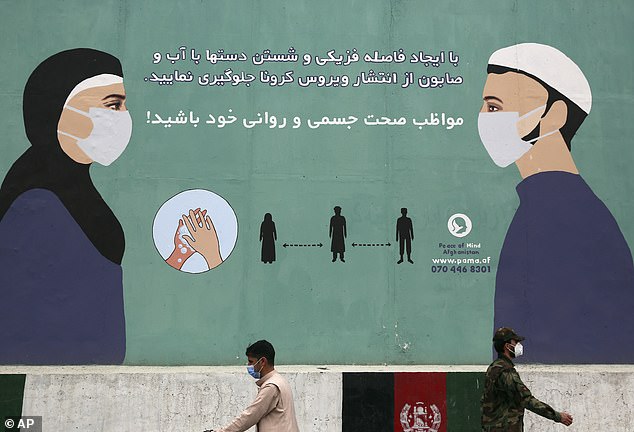 There has been a surge in domestic violence in the country triggered by the coronavirus lockdown. Pictured, men walk past a painted wall giving social distancing advice in Kabul

Last month the Afghan government extended lockdown measures until May 24 and on Friday it recorded its highest death toll, reaching 17 in the previous 24 hours.

A February 29 deal between the United States and the Taliban called for a phased U.S. troop withdrawal and for the government and Taliban to release some prisoners by March 10, when peace talks were to start.

During their 1996-2001 rule, the Taliban banned women from education and work and only let them leave their homes in the company of a male relative.