Vatican City: Pope Francis sought to assure external inspectors of the Vatican's financial operations on Thursday that he was pushing ahead with reforms, as the Holy See reeled from a scandal in which he fired a powerful cardinal.

In an address to Moneyval, the Council of Europe's financial monitoring arm, Francis listed recent actions he had taken to make Vatican finances more transparent. 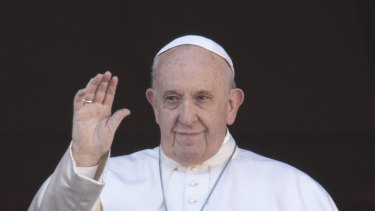 He appeared to refer to the Vatican's latest financial scandals when he quoted the gospel story of Jesus driving the merchants from the temple and telling them "You cannot serve both God and money".

Last month, the Pope fired Italian Cardinal Angelo Becciu, accusing him of embezzlement and nepotism. Becciu has denied all wrongdoing.

Moneyval is making one of its periodic inspections to check the Vatican is complying with international norms to combat money laundering and financing of terrorism.

"The measures that you are evaluating are meant to promote a 'clean finance', in which the 'merchants' are prevented from speculating in that sacred 'temple'," Francis said.

Italian media have this week run interviews with a woman who says she received €500,000 ($820,000) from Becciu to run a "parallel diplomacy" to help missionaries in conflict areas.

Cecilia Marogna's purported work for the Vatican's Secretariat of State, where Becciu held the number two position until 2018, was not previously known.

In an emailed response to Reuters on Wednesday, Becciu's lawyer, Fabio Viglione, said the cardinal knew Marogna but that his dealings with her had been "exclusively about institutional matters". He did not mention her comments about the funds, which Marogna said went through a company she started in Slovenia.

Marogna, 39, who like Becciu is from Sardinia, did not reply to a phone message from Reuters.

Addressing the inspectors, Francis pointed to his approval in June of sweeping new rules for procurement and spending meant to cut costs, ensure transparent competition and reduce the risk of corruption in awarding contracts.

Moneyval has given the Vatican increasingly positive evaluations since its first inspection eight years ago but has lamented the slowness of its judicial arm in carrying out investigations and bringing suspects to trial.

In his email, Becciu's lawyer also denied Italian media reports that his client had sent money to Australia to help enemies of Cardinal George Pell, the former Vatican economy minister who was cleared this year of sexual abuse charges in Australia after spending 13 months in prison.

Pell had accused Becciu of blocking Vatican financial reforms and after Becciu was fired, Pell said the Pope "is to be thanked and congratulated".