Rome: Two prominent Italian intellectuals announced they were returning their Legion of Honour awards to France to protest that Egyptian President Abdel-Fattah el-Sisi was given the prize despite his government's human rights abuses. 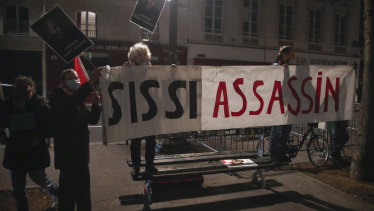 People hold a banner that reads, ‘Sissi killer,’ as they stage a protest against the Egyptian President Abdel-Fattah el-Sisi by the National Assembly in Paris. Credit:AP

Both cited Egypt’s role in the 2016 kidnapping, torture and killing of an Italian doctoral research student in Cairo, as well as the regime's other human rights violations.

French President Emmanuel Macron rolled out the red carpet for Sisi's two-day visit last week and awarded him the highest French honour during a closed-door ceremony on September 7 that only became public after the Egyptian presidency published photos of it.

Speaking outside the French embassy, Augias said he returned his 2007 prize out of “a sense of indignation” given the award was bestowed on Sisi at the same time that Rome prosecutors were detailing to a parliamentary committee the torture that Regeni suffered. 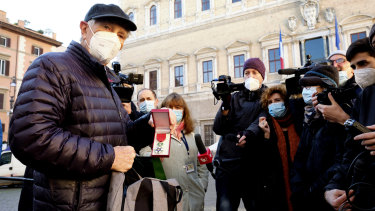 Corrado Augias, a longtime journalist for La Repubblica, shows reporters his French Legion of Honour award prior to returning it to French embassy to Italy, in Rome.Credit:AP

“The two things together were too strong,” he told reporters. “I couldn't refrain from reacting."

Melandri said in a Facebook post on Monday that she too would return the honour she received in 2003, saying it was sad but necessary to make clear that “honour" should mean something.

“I hope that this gesture can help open a frank and friendly confrontation in our two countries on which values ​​should be that we want to defend, strengthen and continue to ‘honour' in a democratic Europe and a globalised world," she wrote.

Sisi’s state visit had sparked protests by human rights activists incensed that France was welcoming him despite the heaviest crackdown on dissent in Egypt’s modern history. At the time, it wasn’t known that Macron had awarded Sisi the highest distinction of the Legion of Honour order of merit, the Grand-Croix, or Grand-Cross. 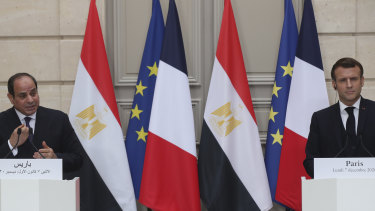 The award ceremony was held without the press before dinner at the Elysee presidential palace in Paris. The event was not listed on Macron’s official agenda.

The French presidency said such a ceremony was usually part of the protocol during state visits.

“France is on the front lines for human rights and makes no compromises,” he tweeted after Augias returned his prize. “Many cases were discussed during President al-Sissi’s visit to Paris, in the most appropriate and efficient way.”

The Legion of Honour has been given to French war heroes, writers, artists and businessmen. But it has also been given to leaders with questionable human rights records, including Syrian President Bashar al-Assad (though he returned it in 2018) and Russian President Vladimir Putin. 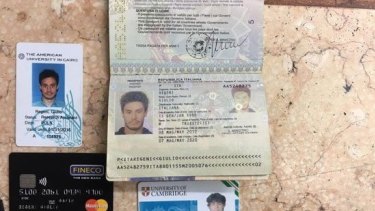 Egyptian President Abdel-Fattah el-Sisi has come under fire for the handling of death of Italian student Giulio Regeni, pictured.Credit:AP

France has on occasion also stripped people of the honour, including Hollywood producer Harvey Weinstein in 2017, in the wake of the #MeToo sexual misconduct accusations against him.

During the visit, France and Egypt signed contracts for French development aid and hospital and transport cooperation.

At his news conference with Sisi, Macron justified such cooperation and ruled out making it conditional on human rights issues, saying Egypt was France’s key partner in the fight against extremism.

“It would be ineffective in terms of human rights and counterproductive in the fight against terrorism — that’s why I won’t do that,” he said.