Home » World News » ‘It will go down well at the Christmas party’: Police accused of stealing whisky

‘It will go down well at the Christmas party’: Police accused of stealing whisky

The owner of a wholesale liquor outlet has launched civil action against Victoria Police over allegations two boxes of Johnnie Walker Blue Scotch whisky, which one officer allegedly said would "go down well at the Christmas party", were stolen during raids on his Boronia business.

Michael Jones, who owns a string of brothels in Melbourne's eastern suburbs, alleges in court documents that police also took an expensive pen and $1600 cash during the 2018 raids, which were part of a money-laundering investigation against the Comanchero bikie gang. 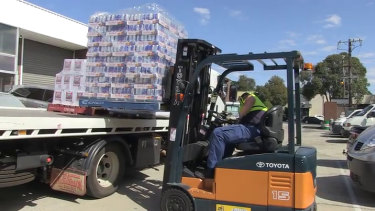 Alcohol seized by police from the Boronia warehouse in 2018.

Mr Danos claimed his client had been wronged by police.

"This is a matter of principle and my client expects [the items] to be returned. He feels slighted and wants the alcohol and other items back."

A sworn affidavit by Detective Senior Constable Fiona Castelow of the Echo taskforce said the whisky had been returned, the $1600 cash was retained as evidence for an upcoming trial of another alleged syndicate member and there was no record that a pen was seized.

Senior Constable Castelow conceded that all charges against Mr Jones had been withdrawn but said that the brief had been referred to the Commonwealth Director of Public Prosecutions for assessment.

She maintained Mr Jones was involved, knowingly or otherwise, in money laundering on behalf of the Comanchero gang.

A hearing in the Melbourne Magistrates Court on December 1 was adjourned until April next year.

Catch all the day’s headlines

At the end of each day, we’ll send you the most important breaking news headlines, evening entertainment ideas and a long read to enjoy.  Sign up here.