Forty per cent of people infected with Covid-19 never show symptoms, according to a study that adds to growing fears about the threat of ‘silent’ transmission.

Most of the town’s 3,200 residents were swabbed in two batches over a period of 14 days at the end of February and beginning of March.

Both times, two fifths of coronavirus-infected patients were asymptomatic and had none of the tell-tale signs of the life-threatening infection.

It isn’t the first time scientists have warned of asymptomatic spread – top academics have called it the ‘Achilles heel’ of the pandemic. 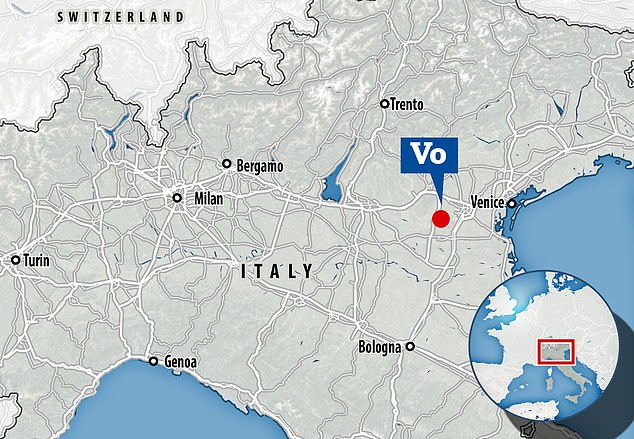 Experts analysed the outbreak in the picturesque Italian town of Vò, which recorded Italy’s first coronavirus death. Most of the town’s 3,200 residents were swabbed in two batches over a period of 14 days at the end of February and beginning of March

Experts behind the Vò study said Covid-19 outbreaks can be contained, despite the threat of people passing the virus on without having any symptoms.

Professor Andrea Crisanti, one of the researchers at Padua University, said: ‘Despite ‘silent’ and widespread transmission, the disease can be controlled.

‘Testing of all citizens, whether or not they have symptoms, provides a way to… prevent outbreaks getting out of hand.’

During that fortnight, researchers tested most of the population for SARS-CoV-2 – the strain of the coronavirus that has caused the pandemic.

Seventy-three residents (2.6 per cent) of the town tested positive during the first batch of swabs, carried out at the start of the town’s lockdown.

HOW VO MANAGED TO STOP ITS COVID-19 OUTBREAK

Vo managed to stop a coronavirus outbreak in its tracks after authorities tested the whole population more than once.

Anyone who tested positive was immediately quarantined to stem the spread of the disease – even if they weren’t showing symptoms.

Two weeks later, mass testing showed the infection rate had dropped by 12 times from three per cent of the population to just 0.25 per cent.

The governor of the Veneto region said Vo was ‘the healthiest place in Italy’.

After two weeks, only 29 people (1.2 per cent) were found to have the virus, suggesting the drastic policy worked in curbing the spread of the disease.

But 40 per cent of positive cases escaped without any of the symptoms Covid-19 is known to cause, including a cough, fever and a loss of the sense of smell or taste.

Professor Crisanti added that the move – similar to one now adopted in the UK – had ‘a tremendous impact on the course of the epidemic’ there compared to other regions.

The study, which also involved academics from Imperial College London, was published in the scientific journal Nature today.

The research is the latest in a string of evidence to show that thousands of coronavirus-infected patients will never suffer any of the tell-tale symptoms.

The team, from Zhongnan Hospital in Wuhan – where the crisis originated – said its findings were evidence that the highly-infectious virus may be more widespread than previously believed.

It backs up official estimates of the size of the outbreak in Britain, where only 310,000 coronavirus cases have been confirmed since the outbreak began.

Antibody testing data from a surveillance scheme suggests around 5million Britons have actually had the virus – 15 times higher than the official case count.

Thousands of people who catch the virus never swab positive because they don’t realise they are sick, couldn’t get a test or the result was wrong.

Separate Edinburgh University research has shown asymptomatic sufferers have a weaker immune response to the virus, raising questions about their immunity levels.

Asymptomatic is different to presymptomatic. Some patients may not show symptoms at the beginning of their infection but eventually develop the tell-tale signs.