Deaths from coronavirus in Italy climbed by 534 today as the total number of infections fell for the second day in a row.

The number of new cases of COVID-19 in the country also increased to 2,729 from 2,256 on Monday, authorities said.

Despite a drop in the number of patients with the disease, fatalities were up from 454 yesterday, making today’s tally the largest daily figure since Friday, the Civil Protection Agency said.

The total death toll since the outbreak in Italy came to light on February 21 was 24,648, the agency said, the second highest in the world after that of the United States.

The number of officially confirmed cases was 183,957, the third highest global tally behind those of the United States and Spain. 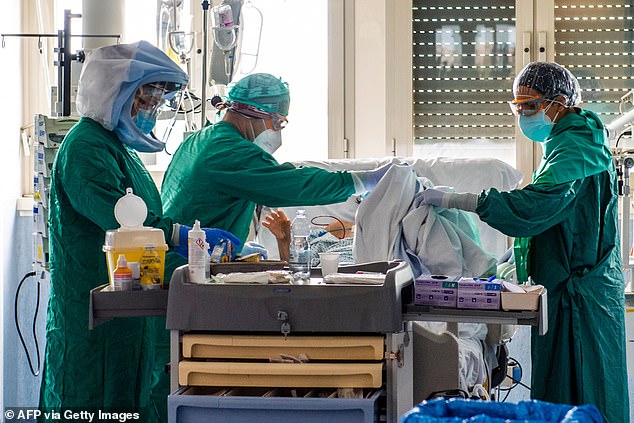 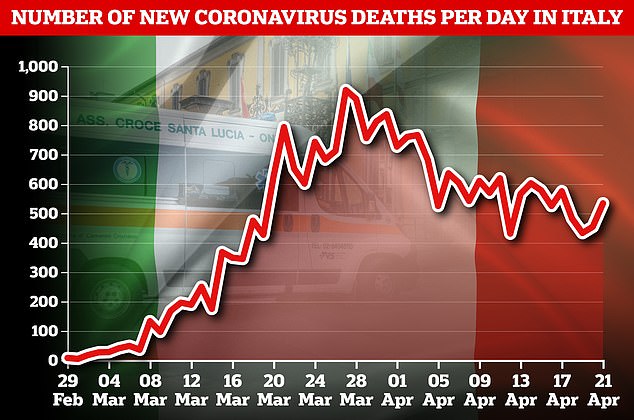 People registered as currently carrying the illness declined to 107,709 from 108,237 on Monday, a second consecutive daily decline.

There were 2,471 people in intensive care on Tuesday against 2,573 on Monday, maintaining a long-running decline.

Of those originally infected, 51,600 were declared recovered against 48,877 a day earlier.

These figures came as Italian Prime Minister Giuseppe Conte confirmed the country would lift some lockdown measures on May 4, but that this would be done on a regional basis.

He said Italian businesses would start to reopen early next month, but the government will not be lifting all the measures that are currently in place.

The country has been under some of the strictest lockdown measures among western democracies since the nationwide quarantine was imposed by Conte on March 9, restricting all but necessary movement. 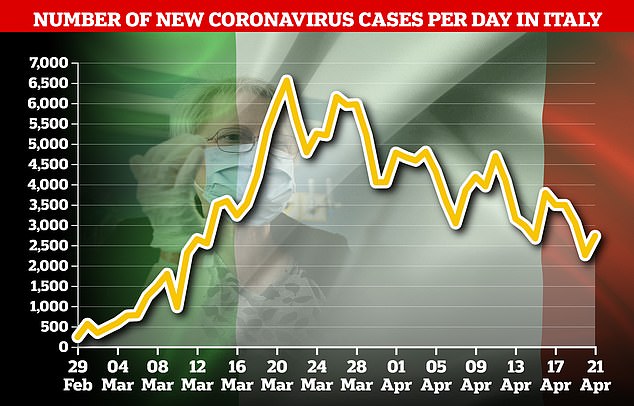 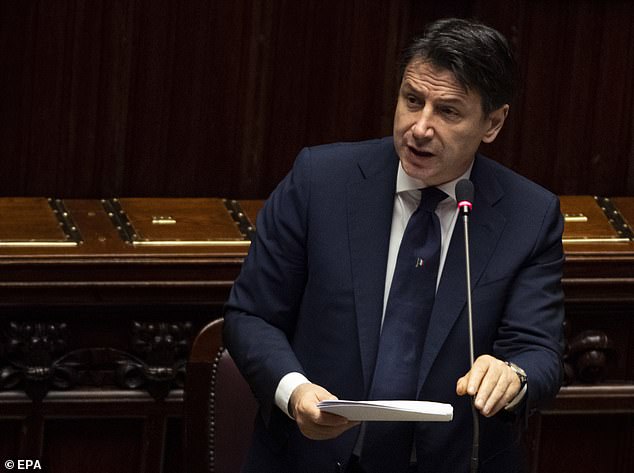 At that point, some of the most infected regions in the north were already under quarantine.

In a Facebook post, Conte wrote: ‘Many citizens are tired of the efforts that have been made so far and would like a significant loosening of these measures, or even their total abolition.

‘I would like to be able to say, let’s open everything. Right away,’ Conte wrote. ‘But such a decision would be irresponsible.

‘It would make the contagion curve rise uncontrollably and would jeopardise all the efforts that we have made until now.’

He said that by the end of the week, he would reveal the steps the country will take to loosen restrictions, reopen the economy and emerge from the coronavirus crisis, but also said that they would take into account different regional circumstances.

‘We have to reopen on the basis of policy that takes into consideration all the details and cuts across all the data. A serious policy, scientific,’ Conte wrote. A reasonable expectation is that we will apply it from May 4.’ 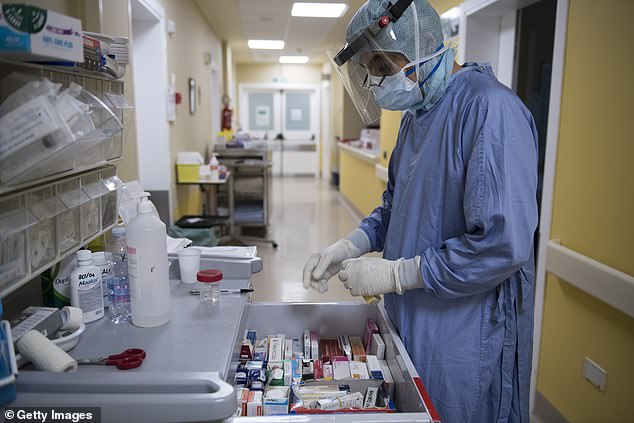 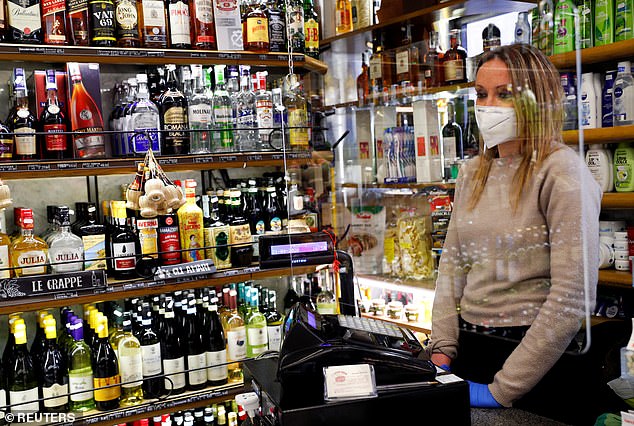 A shop employee wearing a protective mask a gloves standing behind a plexiglas in Rome today. The Italian government is considering relaxing some of the current virus restrictions

Italy’s north, the region hardest-hit by the virus and the country’s economic engine, has been straining to restart industry after a shutdown of nonessential manufacturing on March 26.

Some in Italy’s poorer south have said it is unfair that they are subject to the same lockdown conditions as the north, despite fewer coronavirus cases and a lower population density in many areas.

The Mediterranean country’s 60 million citizens have been barred from walking more than 650 feet (200 metres) from their homes without a significant reason.

In recent days, some businesses have already received permission to reopen with a much-reduced workforce. 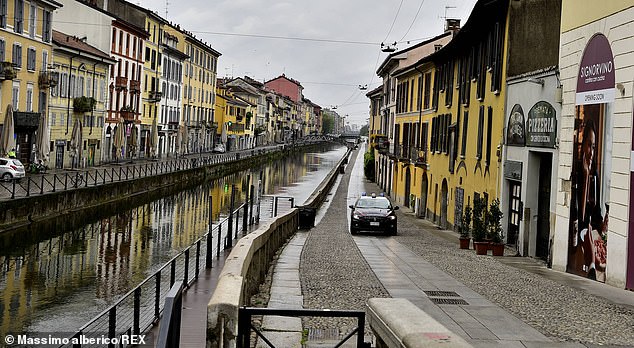 A almost deserted street in Milan yesterday. Italy has been under a national government enforce quarantine since March 9, with all but essential movement and activity banned 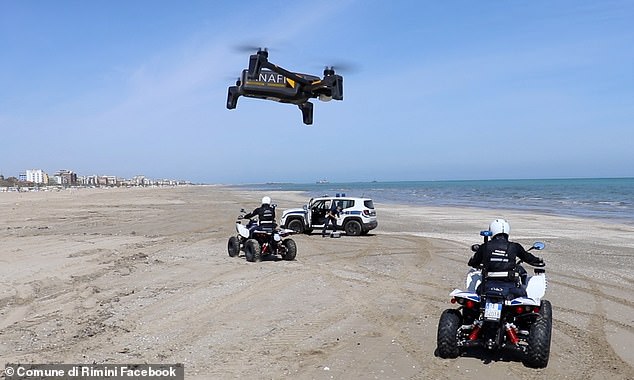 Drones have been used by police to check if people in parks and beaches are breaking the lockdown rules. Pictured (above) in Rimini, Italy

In laying out the challenges ahead, Conte cited how, in allowing businesses to reopen as part of ‘Phase 2’, officials needed to consider how workers would get to and from work in order to avoid congestion which could risk a second wave of infections.

Earlier this month, Conte gave a task force, made up of economists, lawyers, sociologists and other experts, the job of studying the post-lockdown measures needed to restart the economy while protecting worker’s health.

Italy reported its first drop on Monday in the number of people currently suffering from the virus since recording its first infection in February.

Since then, Italy became the epicentre of the virus in Europe.

According to the Italian Interior Ministry, 17,500 people were reported over the weekend for failing to comply with social distancing measures that are in place to reduce the spread of the coronavirus.

On Sunday alone, 8,641 were sanctioned for illegitimate travel, 74 for false declarations and nine for violating quarantine.