Aboriginal land managers are hopeful that they can reconstruct an ancient ceremonial stone arrangement in western Victoria that was damaged by a farmer.

Traditional owners reacted with shock and sadness after Adrian McMaster removed about 60 metres of stone from the site at Lake Bolac on Good Friday. 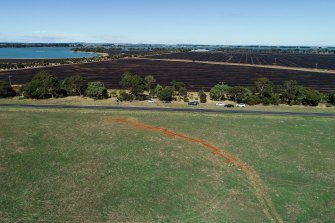 The scar on the landscape left after the stones were removed.Credit:Joe Armao

Mr McMaster inherited the property after his father’s death three years ago and says family knowledge of the exact details of the stones had since been lost.

Aboriginal Victoria began investigating the damage on Tuesday. Mr McMaster apologised for the removal, offering to work with Aboriginal people to replace the stones.

Eastern Maar Aboriginal Corporation general manager John Clarke, a Kirrae Wurrung man, said the organisation was yet to inspect the damage, but he would like the stones replaced if possible.

“That is an option,” he said. “We haven’t been able to ascertain the status of the rocks that have now been stockpiled … They would have been uniquely selected.” 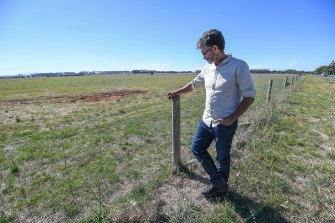 Known for generations as “the stone eel”, the two-arc arrangement was made up of 150 boulders.

A 1980 survey shows the formation, and notes that parts of it were destroyed when the Glenelg Highway was built.

Mr Clarke said Eastern Maar had asked Victoria’s Department of Transport whether that part of the arrangement could be rebuilt.

“We would like to be able to reinstate those rocks that were dozed out of the way many years ago,” he said.

Mr Clarke said Aboriginal people believed the site could be 1500 years old and was one of two at Lake Bolac that were used for ceremonies.

“The cultural integrity of these places far outweighs any other academic value,” he said. “It is our church, our place of worship, so to speak.”

University of Wollongong archaeologist Richard Fullagar, who has worked on stone arrangements in western Victoria, including sites around Lake Bolac, said it was very hard to scientifically date the sites.

“Most of it is guesswork, in terms of the archaeology,” Professor Fullagar said.

He pointed to the World Heritage listed Budj Bim, where scientists have dated aquaculture systems to be about 6600 years old, as the most reliable indicator of the age of some stone sites in western Victoria. 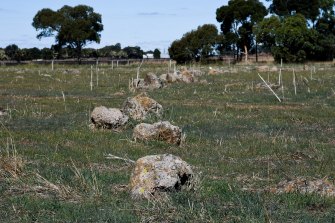 The Aboriginal stone arrangement that has not been removed.Credit:Joe Armao

Budj Bim project manager Denis Rose said in the early 2000s, before the site’s significance was widely understood, that farmers occasionally threatened to damage parts of the sacred land.

“We have had to use the Cultural Heritage Act to stop the bulldozers,” Mr Rose said.

“These days, with World Heritage listed sites in particular, farmers understand the value of the cultural heritage on and around their properties, and we work closely with them to assist with that protection.”

“Victoria’s Aboriginal cultural heritage laws are among the strongest in the country and carry significant penalties for causing harm to sacred sites without authorisation,” she said.

“Aboriginal Victoria is investigating allegations of harm to a significant Aboriginal site known as the Kooyang Stone Arrangement or Lake Bolac stone … and it’s important that we let that process run its proper course.”

Heather Threadgold, an anthropologist at Deakin University who has researched Aboriginal stone arrangements, said there were five known sites in Victoria but many more were unrecorded. 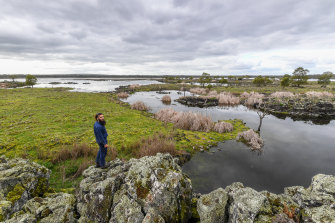 “My research shows 90 per cent of Aboriginal stone sites are on private property,” Dr Threadgold said.

“Most Aboriginal cultural heritage lies in the private domain … both through Aboriginal Victoria and with landowners. If sites become too well known there is the opportunity for damage.”

She credited private landowners for their protection of sites and said most were aware of heritage on their properties.

Mr Clarke said Eastern Maar had strong relationships with a number of private landowners with heritage sites on their properties but the corporation usually relied on the landowner contacting it.

“We aren’t resourced to be able to knock on everyone’s door and say, ‘Hey, you might have something down the back paddock – can we take a look?’” he said.

“At the end of the day, everything is about relationships.”