IVF clinics are being forced to destroy the embryos of grief-stricken families due to a Victorian law that lets sperm and egg donors withdraw their consent after fertilisation.

It’s a situation that has prompted legal and fertility experts to call for changes to better protect the rights of those undergoing IVF, who invest time, money and emotional energy into the treatment. 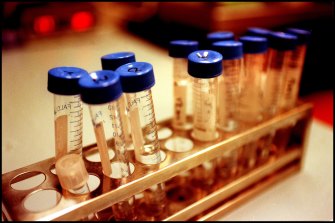 One in 20 Victorian children are born through assisted reproductive treatment.Credit:Louise Kennerley

Leading fertility lawyer Stephen Page said he was aware of at least four Melbourne families who had been told this year that their embryos would be destroyed due to the law, which he described as “unintentionally cruel and crushing”.

“It has caused a lot of grief,” he said.

“You spend all this money, go through this emotional commitment and then the donor has a change of heart and you are screwed. You have to pick yourself up and go through egg collection again and it may not work.”

In January, Melbourne couple Jennifer and Holly Goodman* received some devastating news from a counsellor at Monash IVF.

They were told three of their embryos, which were being stored in a freezer at the clinic, would have to be destroyed because their anonymous sperm donor had completely withdrawn his consent. According to the counsellor, the donor had a new partner who did not want his sperm or any embryos created from it to be used.

“I was devastated,” said Holly. “I had no idea this could happen.”

Holly, who is 33 weeks pregnant with a baby created with her egg and the man’s donated sperm, said her child would no longer have a full sibling.

She also doesn’t want to have to go through the ordeal and expense of having her eggs harvested again.

“We want the law changed so that once an embryo is created they can’t take it away,” Jennifer said. “They say the donor has no ties to the child so why do they get the right to destroy that embryo?”

Professor Fiona Kelly, the dean of law at La Trobe University and a family and health law expert, said she didn’t understand the justification for Victoria’s unusual laws.

“It means you have mixed genetic material of the donor and recipient but the donor retains control over the embryo,” she said.

A spokeswoman for Monash IVF said while she could not comment on individual cases due to privacy, the laws needed to change.

She said when a donor completely withdrew their consent, any embryos formed using their sperm could no longer be used. “This could mean that the recipient’s own eggs effectively go to waste,” she said.

A landmark 2019 inquiry designed to fix Victoria’s “outdated” reproductive treatment laws recommended that the state government only allow donors to modify or revoke consent up until the time their donated sperm and eggs were used for insemination or to create an embryo.

Only a handful of the 80 recommendations contained in the inquiry’s final report have been implemented, including legislation to remove barriers for separated women to access treatment, reforming how surrogate mothers are reimbursed, removing police checks and a commitment to remove legal barriers for same-sex female couples.

A spokesman said the Victorian government was considering the recommendations of the inquiry and progressively implementing them.

“The issues of consent are among many that are under active consideration along with a range of other recommendations,” the government spokesman said.