Author John le Carré has labelled the government’s handling of the coronavirus crisis as a ‘tragic national cock-up’.

The writer, who’s real name is David Cornwell, also claimed the enormous British death toll was a result of ’10 years of austerity’ and the ‘running down of the NHS’.

Le Carré made his comments while in lockdown at his Cornish home where he revealed he is currently writing a new book at the age of 88.

It is not the first time the ‘Tinker, Tailor, Soldier, Spy’ author has been critical of politicians. 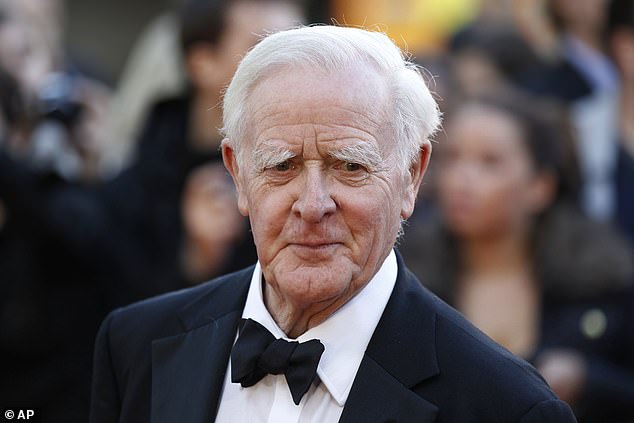 The writer, who’s real name is David Cornwell, also claimed the enormous British death toll was a result of ’10 years of austerity’ and the ‘running down of the NHS.’ (John le Carré at the UK film premiere of “Tinker Tailor Soldier Spy,” in London, 2011)

In his last spy novel, ‘Agent Running In the Field’ which was published last year, he described Boris Johnson as a ‘pig ignorant foreign secretary’.

Speaking about how the government has responded to the pandemic, he said: ‘It is extraordinary Johnson was near death and 30,000 people have actually died.

‘There are signs everywhere of a tragic national cock-up but it really has a history of at least 10 years of austerity behind it and running down of the National Health Service.’

Referring to the prime minister, he added: ‘A man can be pig ignorant and very well educated. There’s a line of that through politics.’

Le Carré also stated he hoped the pandemic would lead to a ‘fairer society’ with a ‘more equal distribution of wealth’. 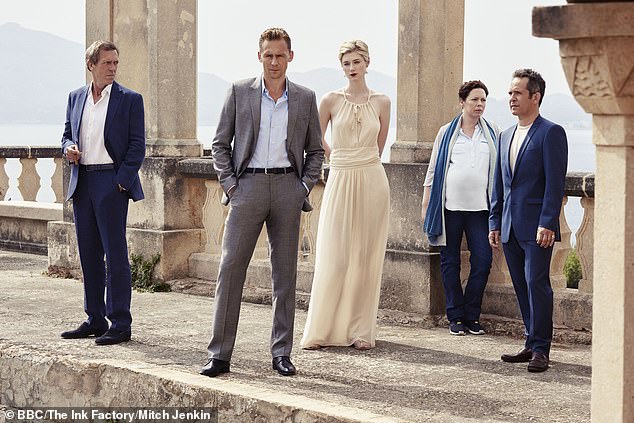 Le Carré made his comments while in lockdown at his Cornish home where he revealed he is currently writing a new book at the age of 88. (The cast of Le Carré’s The Night Manager with Tom Hiddleston as Jonathan Pine, Olivia Colman as Angela Burr, Elizabeth Debicki as Jed Marshall, Tom Hollander as Corcoran and Hugh Laurie as Richard Onslow Roper pictured)

The author of His Dark Materials has called for the government to face ‘conspiracy to murder’ charges if it is revealed the UK rejected an EU scheme to buy huge quantities of personal protective equipment (PPE) for ‘Brexit-related reasons’.

Philip Pullman, 73, said, if true, the ‘entire front bench ought to resign’ but predicted they will not, adding: ‘They have not a single grain of shame.’

His comments came at the end of April when it emerged that the EU had ordered €1.5billion (£1.3billion) worth of protective masks, gowns and gloves for doctors and nurses – but Britain did not take part in talks about the purchases.

Writing in an essay for Penguin, Pullman argued: ‘If it turns out to be true that the government for Brexit-related reasons refused to take part in the procurement advantage offered by EU governments, thus making it harder for the NHS to deal with the Covid-19 and placing thousands of people at risk, the entire front bench ought to resign.

‘But of course they won’t: they have not a single grain of shame. So they should be arraigned on charges of conspiracy to murder. Nothing less will do. They knew the risks, and thought they’d rather appease the foaming zealots of Brexit.’

Pullman made the arguments as part of a series from Penguin, named Perspectives, in which writers share their views on the coronavirus pandemic.

According to the publishing company, £10,000 has been donated towards booksellers affected by the virus outbreak on behalf of the essayists.

He said: ‘Positively, I feel all of this could bring us a fairer society and greater levelling with a more equal distribution of wealth.

‘Not a Communist society, just a sane and sensible one.’

The creator of the Spy Who Came in From the Cold was also critical of the European Union for its handling of the pandemic.

He said: ‘The curious thing is that national frontiers have grown much stronger through this experience. The European Union has in many ways failed itself by not distributing wealth and facilities equally among its members.

‘The recent past is already history and the future is unborn and it is the future I think of often with great excitement.’

Le Carré was speaking to the Steve Harris Breakfast Show on BBC Radio Solent after he recently became a patron of the Dorset-based children’s charity Julia’s House.

The author was born in Poole and educated at Sherborne School before moving away.

He has a home in Hampstead, north London, and a cliff-top home in St Buryan, Cornwall, where he took up residence with wife Jane before the coronavirus lockdown.

But he said the lockdown had given him the opportunity to carry on writing.

He said: ‘I feel survivor’s guilt. We live mainly in Cornwall and we came down here in advance of lockdown, not because lockdown was coming, we just had an arrangement to come back.

‘We are completely alone. It is a kind of honeymoon on the cliff. I am working from 9am and it seems almost as though it would be insulting, so to speak, not to write and produce now because it feels such a privilege to be here. It is going very well.

In ‘Agent Running in the Field’, a former spy named Nat bemoans ‘a minority Tory government of tenth-raters, a pig ignorant foreign secretary who I’m supposed to be serving, Labour no better’. 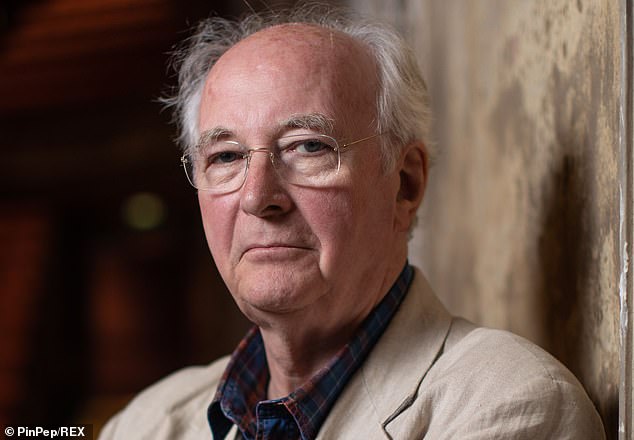 Philip Pullman, pictured, 73, called for the government to face ‘conspiracy to murder’ charges if it is revealed the UK rejected an EU scheme for PPE due to ‘Brexit-related reasons’

He correctly predicted in the same correspondence to an American friend that the Liberal Democrats’ decision to form a coalition with the Conservatives would see them ‘evaporate into their own hot air’.

Former MI6 spy David Cornwell transitioned from espionage to be one of Britain’s most critically acclaimed authors.

He has written 25 books under the pen name John le Carré, including ‘The Constant Gardener’ and ‘The Night Manager.’