Green activists say £3.5billion ‘British Disneyland’ theme park on the banks of the Thames – which would be the size of 140 football pitches – will ‘destroy irreplaceable habitat’ including critically endangered jumping spider

Plans for a £3.5billion theme park on the banks of the Thames would destroy ‘irreplaceable’ habitats currently home to birds and otters, activists say.

Environmentalists fear the proposed mega-attraction, dubbed the ‘British Disneyland’, on the Swanscombe Peninsula, Kent, would harm wildlife – including a critically endangered jumping spider.

Developers say the London Resort, set to feature rollercoasters and a dinosaur-themed ‘prehistoric nature reserve’, will generate £50bn over 25 years and include mitigation for the environment.

Under current plans, which need to be approved by the Government before a proposed opening in 2024, the London Resort would be built on 465 hectares of land near Dartford, Kent.

If plans go ahead, the resort will become the UK’s largest theme park built on the former industrial site which activists say has now become a ‘unique haven’ for wildlife. 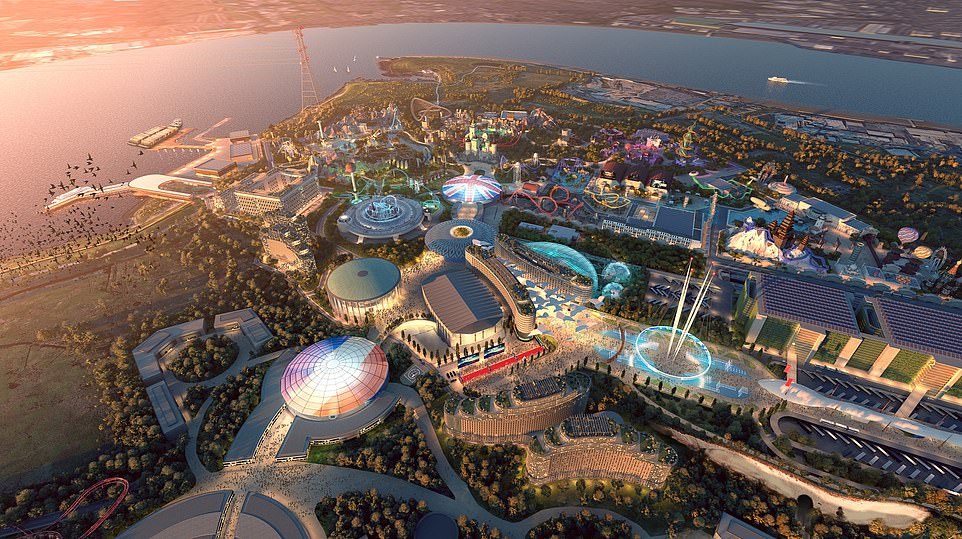 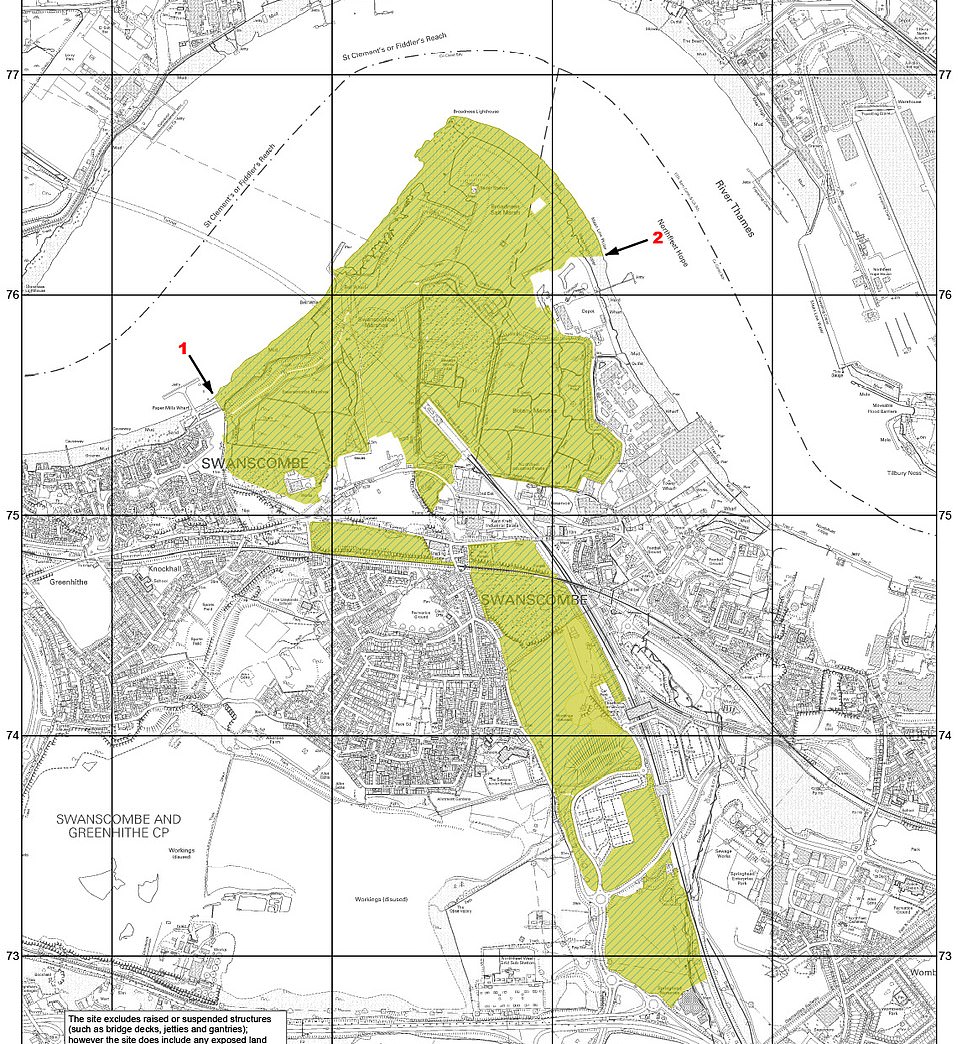 The Swanscombe Peninsula, Kent (pictured above) was designated a site of special scientific interest earlier this year 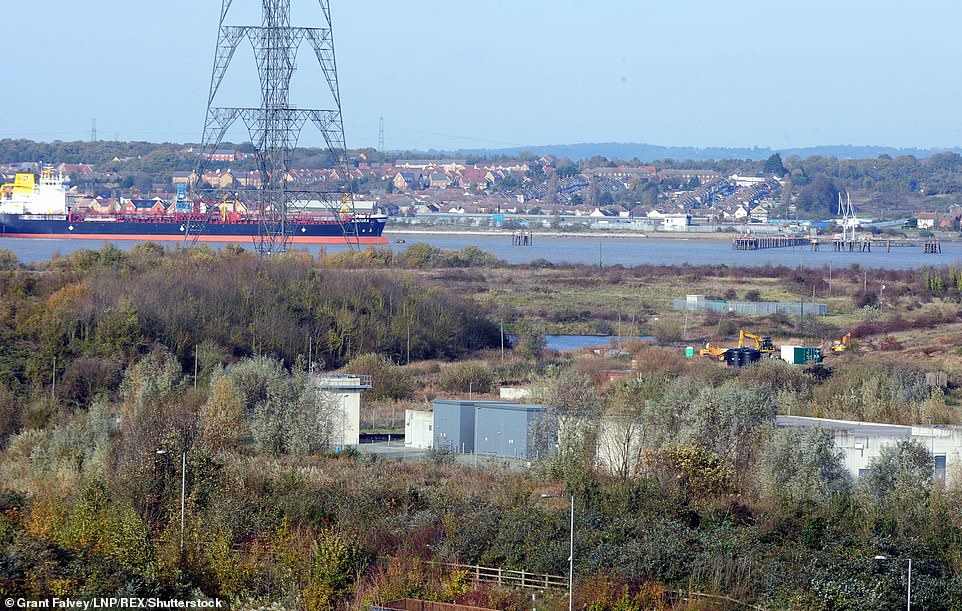 Under current plans, which need to be approved by the Government before a proposed opening in 2024, the London Resort would be built on 465 hectares of land near Dartford, Kent (pictured above)

The distinguished jumping spider (Sitticus distinguendus) is one of the rarest arachnids found in the United Kindgom.

The species are known for their large pair of eyes, which afford excellent vision and allows the distinguished jumping spider to actively hunt prey throughout the day. 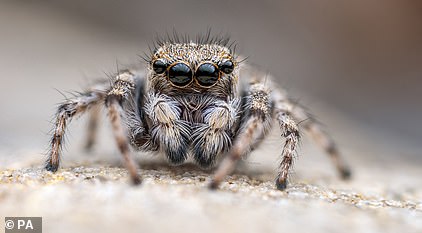 Although there are more than 40 types of jumping spider found in the UK, the distinguished variety are among the most rare.

As of present, they have only been found in marshland in West Thurrock, Essex and in Swanscombe Peninsula, Kent.

Jumping spiders are known to be of stocky but small builds and are reocnigsable due to their enormous forward-facing eyes and square-shaped carapaces.

Nicky Britton-Williams from Kent Wildlife Trust said that the project would see 140 football pitches worth of ‘precious’ habitat ‘effectively concreted over’.

She explained: ‘The Swanscombe Peninsula is a fantastic example of how wildlife can reclaim a site that’s previously been used by humans.

‘What’s been left is a really rich mosaic of habitats: we’ve got areas of bare earth and flowering plants that are really important for invertebrates, we’ve got the wetland areas that are vital for birds and for species like water vole and otter.

Among the various birds, mammals and invertebrates found at Swanscombe Peninsula is the critically endangered distinguished jumping spider.

Ms Britton-Williams added: ‘That particular spider is only found in two locations in the whole of the UK, and one of those locations, here, the Swanscombe Peninsula, is under threat.

‘At the moment, the local people love this site, it’s used for your day-to-day exercise and immersing yourself with nature.

‘We saw in lockdown how important connecting people with nature is for mental health and wellbeing, and people do rely on this site for that.’

In March, the Swanscombe Peninsula was designated a Site of Special Scientific Interest (SSSI) for its grassland, scrub, wetlands, grazing marsh and saltmarsh habitat which is home to an array of wildlife.

Buglife, the RSPB, Kent Wildlife Trust, CPRE Kent and Save Swanscombe Peninsula are working together to save the site and are urging Natural England to do everything in its power to ensure the area is protected.

As a Nationally Significant Infrastructure Project (NSIP), the London Resort plans need to be approved by the relevant Secretary of State.

Thousands of Kent-based firms have committed to bringing the ambitious London Resort to life by the proposed 2024 deadline.

The first-ever up-close pictures showed rides and attractions at the London Resort, which has been dubbed ‘Britain’s Disneyland’. New renderings reveal the park’s dinosaur land, Base Camp 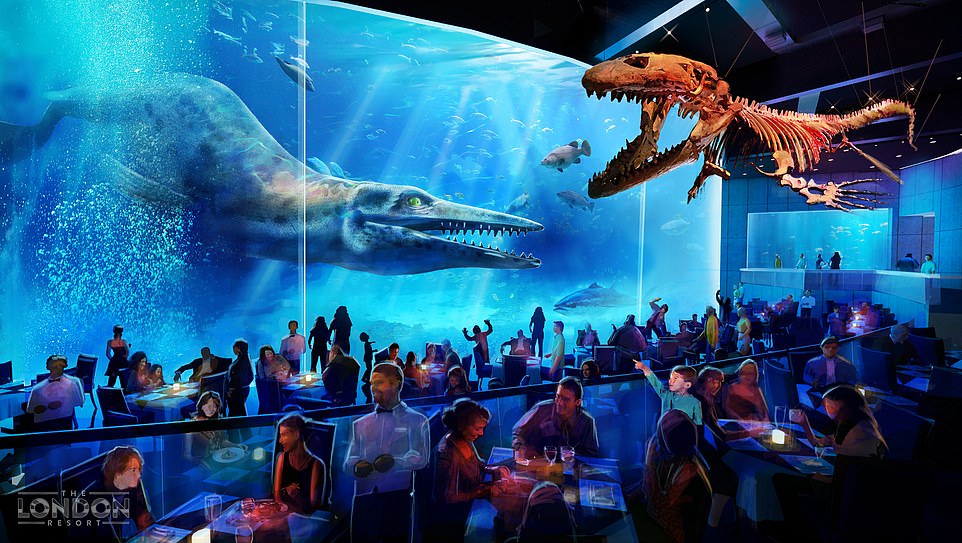 One of Base Camp’s restaurants will be ‘a fine dining experience’ situated at the edge of an underwater cliff. It will feature floor-to-ceiling windows, ‘first rate cuisine’ and ‘a view to die for’ 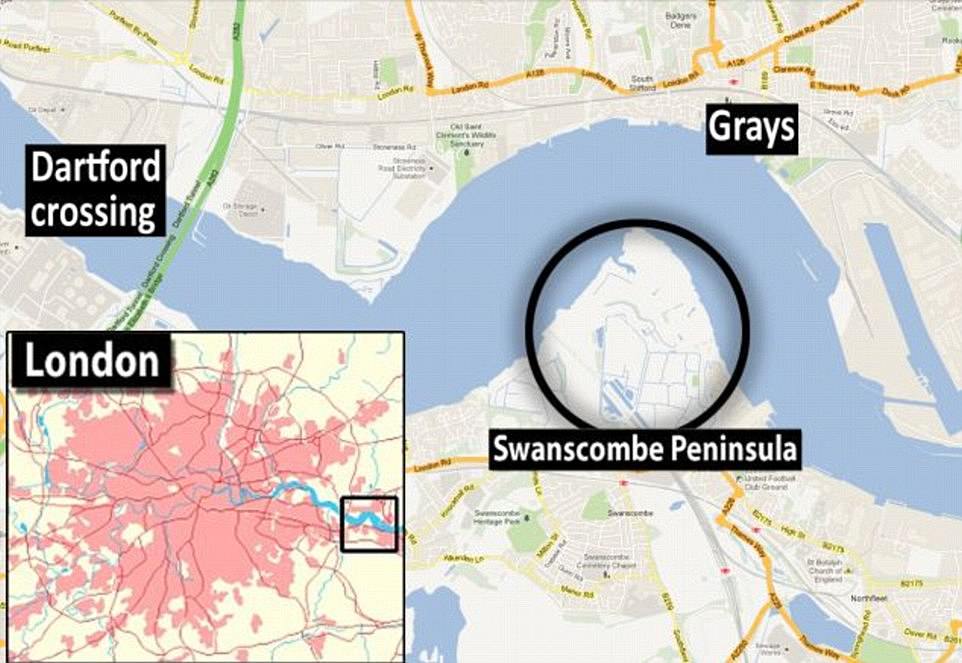 Ms Britton-Williams said: ‘We are calling on the Government to ensure that they fulfil their commitments to tackling the nature and climate crisis and protect this precious wildlife site.’

He added: ‘Huge parts of the area are contaminated, it is largely a brownfield former industrial site which has been unmanaged for decades.

‘We have committed to invest £150 million on remediation, mitigation, habitat enhancement providing around eight miles of footpaths and public rights of way and substantial ecological compensation.

‘We have also stated our intention to create 48,000 jobs by 2038 and deliver £50bn of gross economic activity, a third of which will directly benefit local regions,’ he added.