Key worker and wife scoop £10,000-a-month in the National Lottery

Key worker and his wife scoop £10,000-a-month in the National Lottery Set for Life draw after buying the winning ticket ‘on a whim’

A young couple who scooped £10,000 per month for a year on the lottery have said lockdown is a ‘strange time’ to win as they have not been able to celebrate with family and friends.

Rich Pearson, a 30-year-old key worker in the infrastructure sector, and 33-year-old wife Kim, who bought the ticket ‘on a whim’, matched the five main numbers in the Set For Life draw on May 11.

The pair, from Upminster in east London, had been saving to get on the property ladder and now plan to start their house hunt in earnest. 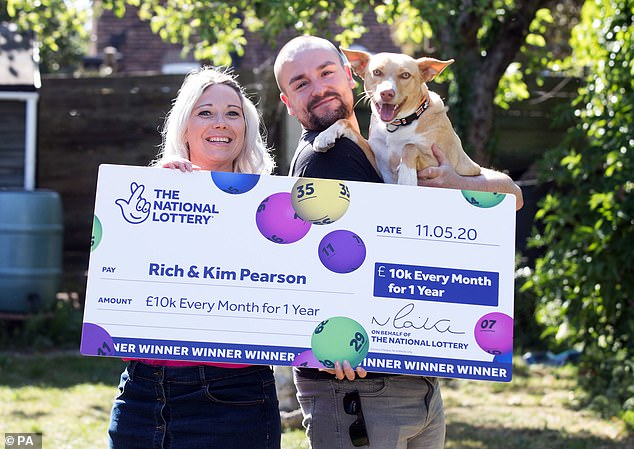 Rich and Kim Pearson, with their rescue dog Loki, celebrate their £10,000-a-month win in the National Lottery Set for Life draw on May 11

Office manager Mrs Pearson saw they had won when she checked her online account, then ran upstairs to tell her husband.

Mr Pearson said his wife woke him up, shouting ‘we’ve won the lottery!’

‘I’d been working a night shift so was in the deepest sleep when Kim jumped on me,’ said Mr Pearson. 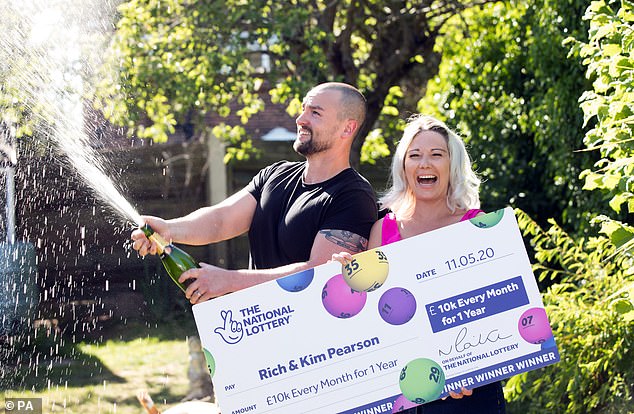 Mr Pearson, a 30-year-old key worker in the infrastructure sector, was woken up by wife Kim as she screamed ‘we’ve won the lottery!’

‘I had no idea what she was on about to begin with but it quickly sunk in when she showed me her phone and how much we’d won.

‘It was certainly one of the more surreal starts to the day.’

They called Camelot to confirm the win before Mrs Pearson continued with her work commitments and her husband got ready for his night shift.

They said they hope to find a home with a garden for their rescue dog, Loki.

‘It was a really strange day, it was such a crazy experience that we spent most of the day just grinning at one another,’ said Mrs Pearson.

‘Then Rich went off to work so I had a glass of wine and celebrated with Loki.

‘For a couple of years we’ve put all the luxuries, like meals out and holidays, on hold so we could save for a deposit but when we saw Loki needed a home he became our essential, not luxury. 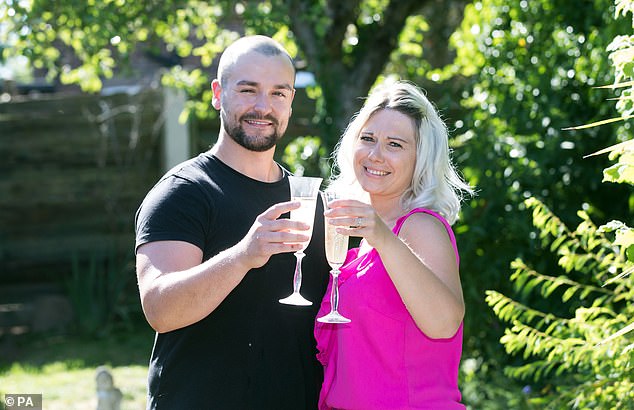 The lucky couple will now start their house hunt in earnest after Mrs Pearson, an office manager, bought the winning ticket ‘on a whim’

‘We can’t help thinking that maybe fate decided to help give us a home because we’d given Loki his forever home.’

She added: ‘This is a strange time to win because we haven’t been able to celebrate with those closest to us but when we safely can, that celebration will be all the sweeter.

‘We will definitely be treating everyone, and we may think about a holiday to see family in New Zealand but all that is some way off.

‘So for now, we will keep ourselves safe, keep Loki entertained and out of mischief, and crack on with our house hunt.’