‘I thought she was going to stay asleep!’ New shadow chancellor Anneliese Dodds’ young daughter photobombs mother live on TV as she tries to explain Labour’s response to coronavirus

Labour’s new shadow chancellor handled her first big test in the role when her young daughter burst into the room during a live TV interview this morning.

Anneliese Dodds argued on Sky News today that the coronavirus crisis has further exposed the need to properly fund public services and rebalance the economy.

She said she wants to work ‘constructively’ with Chancellor Rishi Sunak in improving the Government’s emergency packages, warning against any ‘partisan knockabout’.

But she endured a tense moment when she was interrupted during her first round of broadcast appearances after being promoted by Labour leader Sir Keir Starmer.

Appearing via a videolink from home in Oxford, the mother-of-two coolly smiled and continued with barely any sign of disturbance when Isabella burst into the room.

‘I thought she was going to stay asleep, sorry… so embarrassing,’ she said, asked about the moment at the interview’s close. ‘She’s thankfully under the chair now.’

Only elected to Parliament in 2017, the Oxford East MP leapt from the role of a junior shadow Treasury minister to one of the most senior roles in politics after Sir Keir succeeded Jeremy Corbyn over the weekend.

Anneliese Dodds: Already risen high after first being elected in 2017

Labour MP for Oxford East since June 2017, Anneliese Dodds previously served under Jeremy Corbyn as a shadow Treasury minister – a position she took up just a month after being elected to Parliament.

Before taking up her seat in Westminster three years ago, the new shadow chancellor represented Oxford as an MEP, where she served on the economic and monetary affairs committee.

In her life before politics, Ms Dodds worked as an academic and it is thought her research focused on public policy and risk in different industries, sectors and nations.

According to her website, housing and investment in public services including the NHS, social care and schools are among her key interests.

Her website also says that she lives on Rose Hill, Oxfordshire, with her partner Ed and two children, Freddie and Isabella.

The 42-year-old former academic warned the necessity of many Labour policies was being desperately highlighted by the Covid-19 outbreak, but said the public did not trust the party to implement them under the previous leadership.

‘When we look at Labour’s policies around areas like properly funding public services, having a fair economy, a labour market that actually works for people, I think, sadly, we can see as a result of this crisis that many of those policies are really needed but clearly the British public in the last election didn’t trust us to deliver those policies,’ she told BBC Breakfast.

She said she would be speaking with her counterpart in Government later on Monday, saying she would press ministers on improving the emergency package to shore up the economy.

And as the world faces economic uncertainty not seen since the financial crisis in 2008, she praised former Labour chancellor and prime minister Gordon Brown as an inspiration.

‘I was very engaged in politics at the time when Gordon Brown led that international response to the financial crisis that occurred back in 2008-9 and I was inspired by his international leadership back then,’ she told BBC Radio 4’s Today programme.

‘I think we need to have that kind of approach coming from the UK now as well, so certainly that’s something that I’ll be pushing as hard as I possibly can.’

Yesterday, Sir Keir Starmer announced the senior members of his new shadow cabinet – and has given a top job to former leadership rival Lisa Nandy. 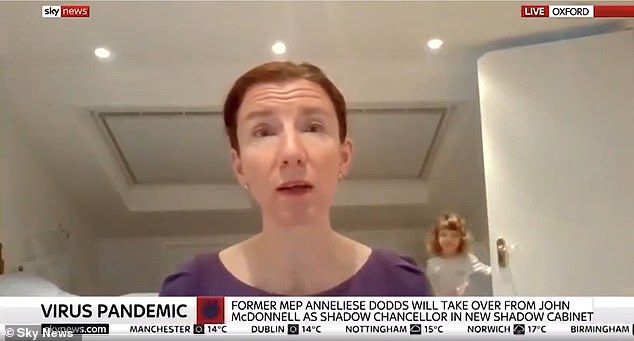 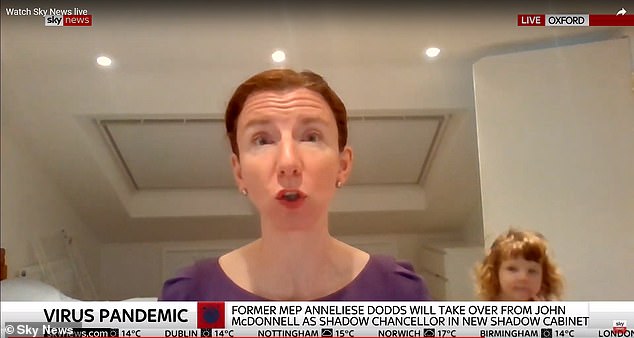 The Wigan MP, who came third in the contest to replace Jeremy Corbyn, will serve as shadow foreign secretary.

Nick Thomas-Symonds has been appointed shadow home secretary, Rachel Reeves is shadow chancellor of the Duchy of Lancaster and Jonathan Ashworth will remain shadow health secretary.

Nick Brown has been re-appointed chief whip and Angela Smith remains shadow leader of the Lords.

John McDonnell and Diane Abbott, who served under Mr Corbyn, are out of the shadow cabinet, but former shadow foreign secretary Emily Thornberry is expected to remain – albeit in a different role. 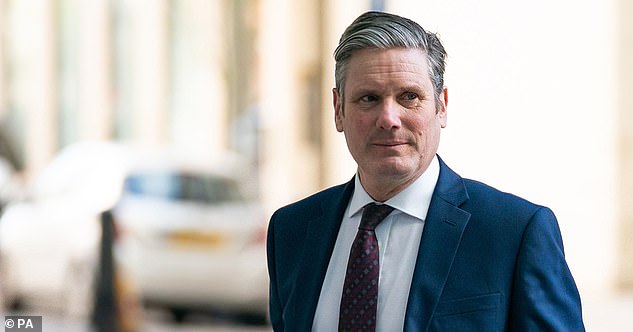 Sir Keir Starmer made Anneliese Dodds the new shadow chancellor. The Labour leader is pictured yesterday at BBC Broadcasting House in London to appear on the Andrew Marr Show

Sir Keir secured 56 per cent of the 490,731 votes cast in the three-month contest – beating his rivals Rebecca Long-Bailey and Ms Nandy to replace Mr Corbyn.

He has vowed to engage constructively with the Government amid the coronavirus crisis, saying he will not seek to score party political points – nor demand the impossible.

On Brexit, Sir Keir said the Government ‘should extend’ the transition period ‘if it’s necessary to do so’ because of the pandemic.

Angela Rayner won the deputy leadership with 52.6 per cent of the vote in the third round, and promised to ‘do everything’ to repay her supporters’ trust.