Lawyer for Florida man seen at Capitol riot with Pelosi’s lectern says photo a problem: ‘I’m not a magician’

The man who authorities say was photographed carrying House Speaker Nancy Pelosi’s lectern was booked into jail in Florida.

The lawyer for a Florida man pictured last week inside the U.S. Capitol carrying the lectern of House Speaker Nancy Pelosi as rioters stormed the building told reporters Monday that the photo may be problematic for his client’s defense and acknowledged that he is “not a magician.”

Attorneys Dan Eckhart and David Bigney appeared outside a Tampa courthouse on Monday with their client, 36-year-old Adam Christian Johnson. Eckhart gave reporters a frank assessment of the case.

“You have a photograph of our client in a building, unauthorized to be there, with what appears to be a podium or a lectern, I’m not exactly sure which one it is called. But that’s what we have,” Eckhart said.

A reporter can be heard saying to Eckhart that the photo “obviously” presents a problem for him as a defense attorney.

“I don’t know how else to explain that, but yeah, that would be a problem,” Eckhart said. “I’m not a magician, and neither is Mr. Bigney. So yeah, we have a photograph of our client, who appears to be in a federal building or inside the Capitol with government property.”

Eckhart and Bigney did not immediately respond to Fox News’ request for comment on the case Tuesday. 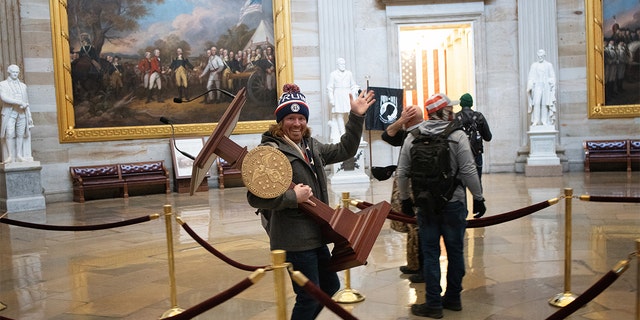 A pro-Trump protester carries the lectern of U.S. Speaker of the House Nancy Pelosi through the Rotunda of the U.S. Capitol Building after a pro-Trump mob stormed the building on Jan. 6, 2021.
(Getty Images)

Johnson, of Parrish, Fla., was identified from a viral photo that shows him smiling and waving as he carried the lectern inside the Capitol after a pro-Trump mob stormed the building as Congress was counting electoral votes Wednesday.

Johnson was arrested Friday and charged with “one count of knowingly entering or remaining in any restricted building or grounds without lawful authority; one count of theft of government property; and one count of violent entry and disorderly conduct on Capitol grounds,” the Justice Department said Saturday in a statement. 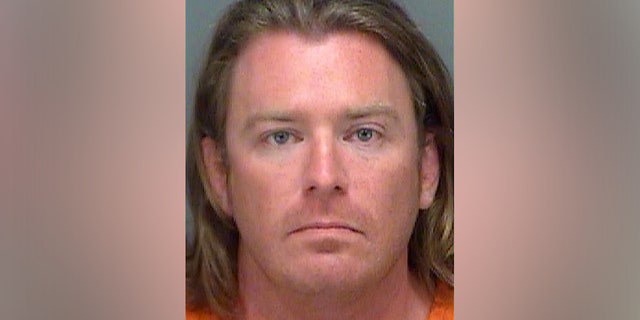 Adam Christian Johnson was taken into custody in Florida on Friday. He was released on Monday after a judge ordered his travel restricted.
(Pinellas Sheriff’s Office)

The 36-year-old stay-at-home father of five was released from custody on Monday.

Judge Christopher Tuite ordered Johnson to wear a tracking device and restricted him from traveling outside the Middle District of Florida while the case is pending, WTSP-TV reported. He is allowed to travel to Washington, D.C., for court appearances.

Johnson’s next court date is set for Jan. 19 in the nation’s capital – just one day before President-elect Joe Biden’s inauguration.

“I can assure you he is not going to be attending the inauguration,” Eckhart told the court, according to the Tampa Bay Times. 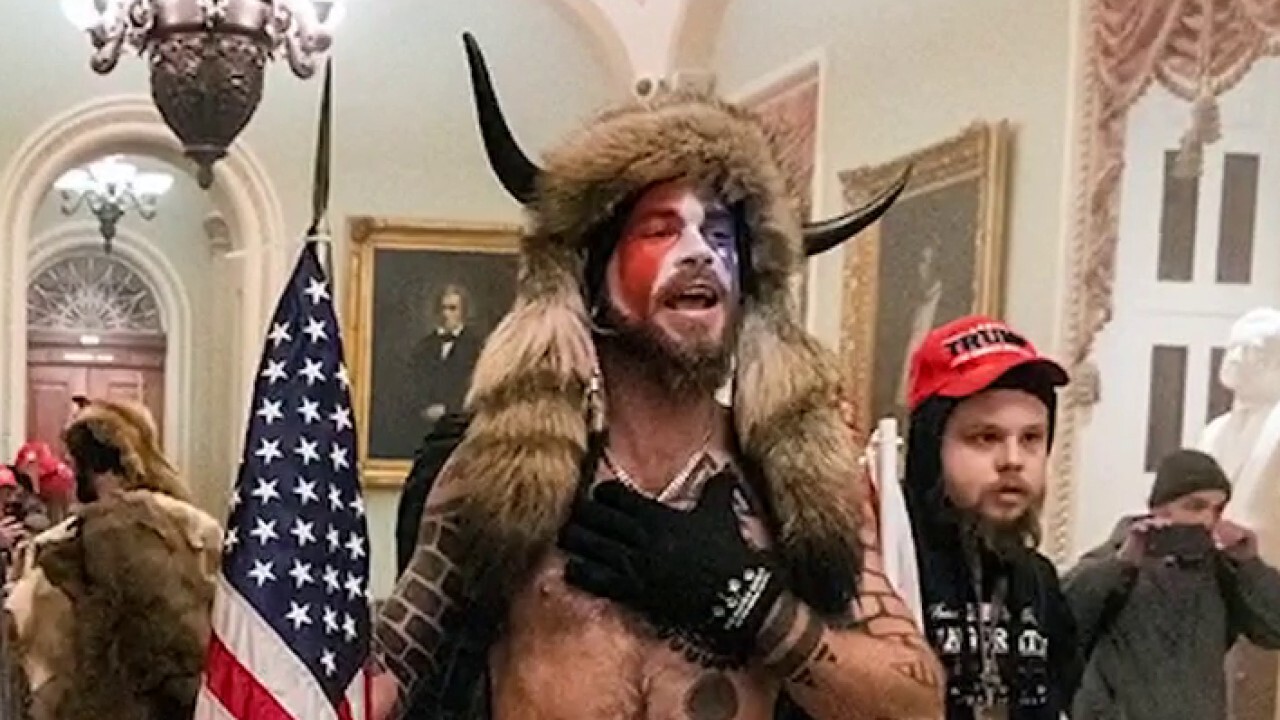 The FBI is searching for any information related to people identified as participating in the Capitol riot. The bureau has released dozens of photos of people accused of breaking into the building and asked for the public’s help in identifying them.

On Monday, the FBI released new photos showing the suspect or suspects allegedly responsible for placing pipe bombs at the Republican and Democratic national committee offices in Washington, D.C., around the same time the rioters stormed the Capitol.

The agency is offering a $50,000 award for any information that leads to the location, arrest and conviction of the person or persons responsible for placing the suspected pipe bombs.