Mexico City: A promise from Argentina’s largest bank to hire transgender workers has ignited a backlash from some LGBT+ rights groups who argue that the hiring should favour trans women who face higher rates of violence than do trans men.

State-owned Banco Nacion announced last week that it would seek to fill 1 per cent of its workforce with transgender employees, part of an agreement with the banking industry's labour union, Asociacion Bancaria.

The vow is the latest sign of progress for LGBT+ rights and acceptance in Argentina, which in 2010 became the first nation in South America to legalise gay marriage. 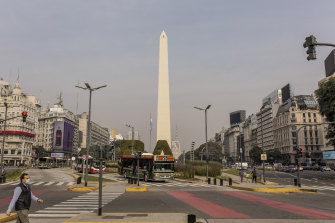 But when local media reported that the first person hired under the scheme was a trans man with a political background, some activists accused the state bank of favouring a privileged male candidate over a trans woman.

More than 60 advocacy organisations signed an open letter saying the hiring of a trans man was "a mockery of the agonising need” faced by trans women.

"Trans men can experience violence, but they don't experience the structural violence that trans women do across Latin America," said Lara Bertolini, a trans activist.

"We're not even in the margins of poverty and the most vulnerable social categories – we're outside those margins."

Trans people face rampant abuse in the predominantly Catholic nation, with six out of 10 transgender Argentinians suffering social discrimination, according to a 2014 study from advocacy groups ATTTA and Fundacion Huesped.

Before 2012, half of trans women said they had been physically abused, and 40 per cent reported sexual abuse from security forces, according to the study.

In 2012, Argentina joined a handful of countries that allow trans people to change their gender designation on official identification documents without physical or psychological tests.

The trans man in question, Thomas Casavieja, told the Thomson Reuters Foundation that the backlash was misleading.

"It's prejudiced to believe that we have a better passage through life than other trans people … that is not the reality," said Casavieja, whose family rejected him when he was eight years old.

He said he has been unemployed for nine months and has not gotten a formal offer from Banco Nacion, where the trans quota has not yet been officially implemented.

Once launched, the bank plans to hire of about 17 trans people every year until the quota is reached, he added.

Casavieja said trans people would face the same hiring process as other applicants, but with discrimination removed.

"There won't be any type of barrier in terms of the job interview for being a trans person," he said. "That is already an immense step forward and an immense joy for our entire community."

Several bills are being considered in Argentina to guarantee employment opportunities for trans people nationwide.