Lost dog reunited with owners after they enticed him with BACON

A terrified sausage dog who spent three days lost on farmland was reunited with his owners after they tried to entice him from his hiding place by cooking bacon.

Floyd, a seven-month-old miniature sausage dog, bolted into a field in Middleton Tyas, North Yorkshire, when he was frightened by barking on Friday evening.

The moment he plucked up the courage to come out of hiding on Monday was captured on video by his owners, Fern Holmes and Doug Dinwiddie.

They had feared the worst as Floyd was nowhere to be seen over the weekend, even when they brought out their 18-month Airedale, Freida, to entice him out. 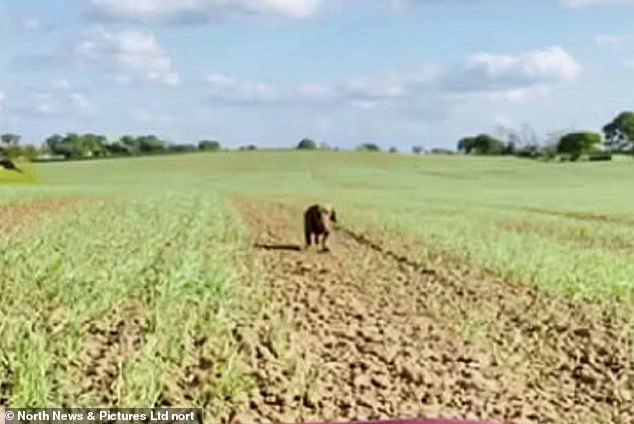 Floyd, a seven-month-old miniature sausage dog, trots through the wilderness before he is emotionally reunited with his owners Fern Holmes and Doug Dinwiddie. He had been lost Middleton Tyas, North Yorkshire from last Friday until the heartwarming moment was captured on film on Monday 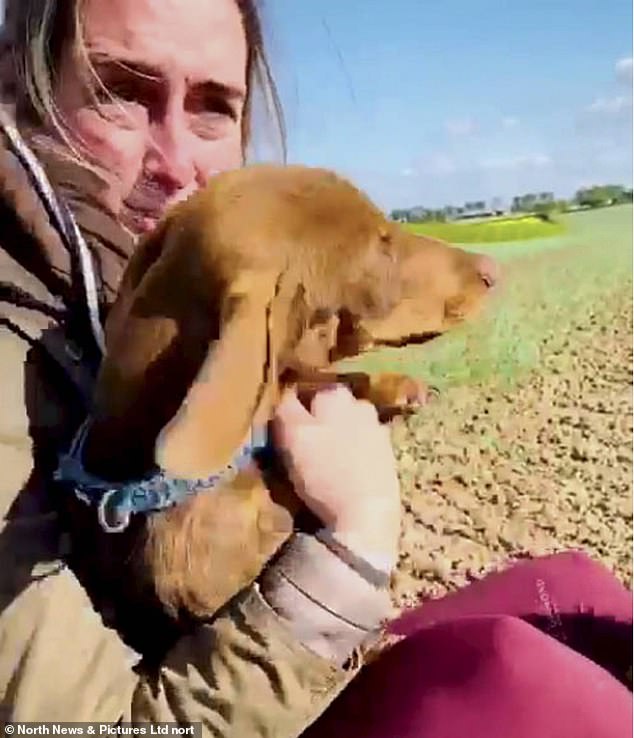 Owner Fern, 32, begins crying with joy as she is finally reunited with her puppy after cooking bacon to help encourage him out of hiding

Doug calls out to Floyd in a high pitched voice to entice him over, saying ‘Floydo. Hello little man’.

The nervous puppy cautiously begins trotting over before stopping, as Doug and Fern continue to encourage him over.

He starts to run over with his tail wagging once he realises his owners are there and Fern picks him up to give him a cuddle while Doug laughs.

The little dog starts squealing in excitement as he is embraced by Fern, who starts crying as she is overwhelmed by the happy reunion. 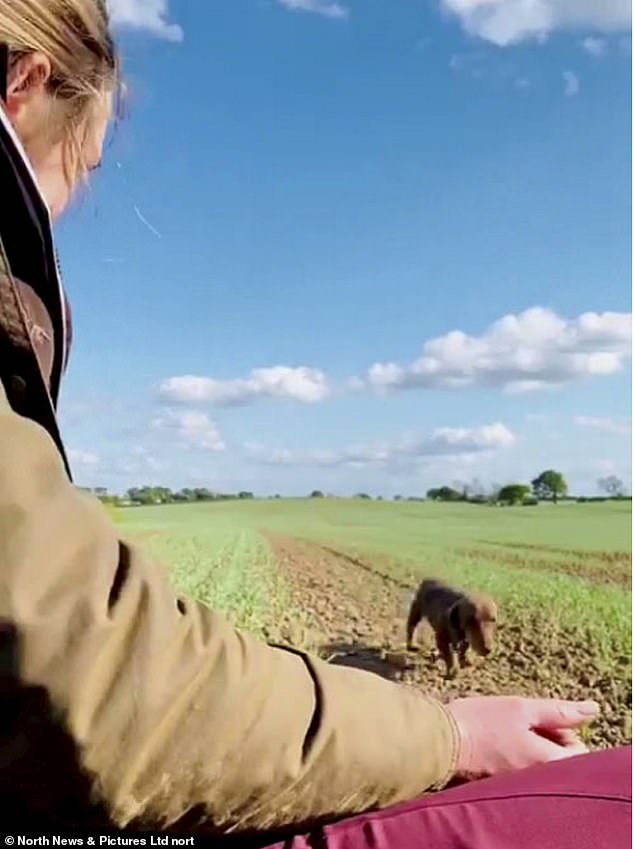 Floyd smells the bacon cooked on disposable barbecues by Fern and Dougie to help encourage him back, as well as the open tins of sardines and trails of beef stock the couple put out 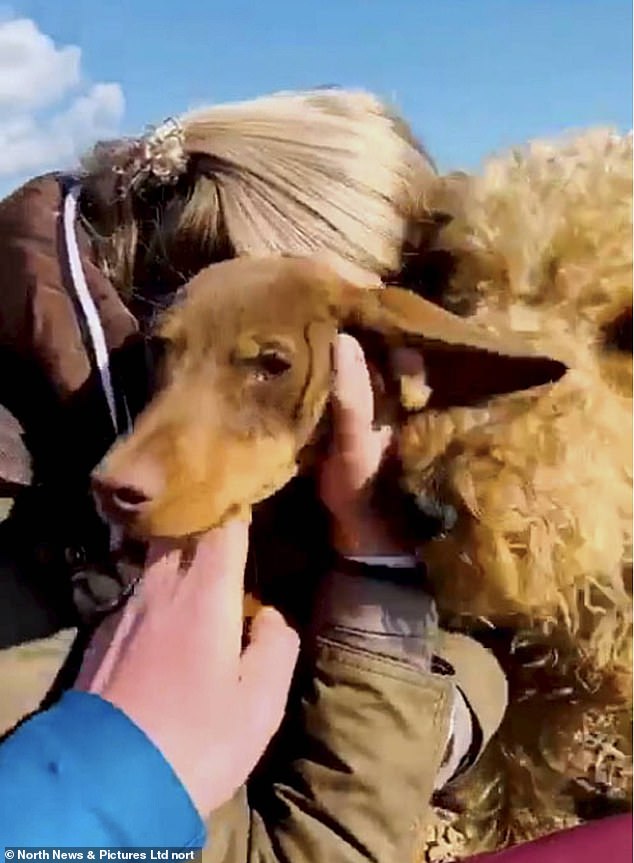 Freida, an 18-month Airedale Terrier, joins the embrace as Doug, filming the scene, reaches out to pet him 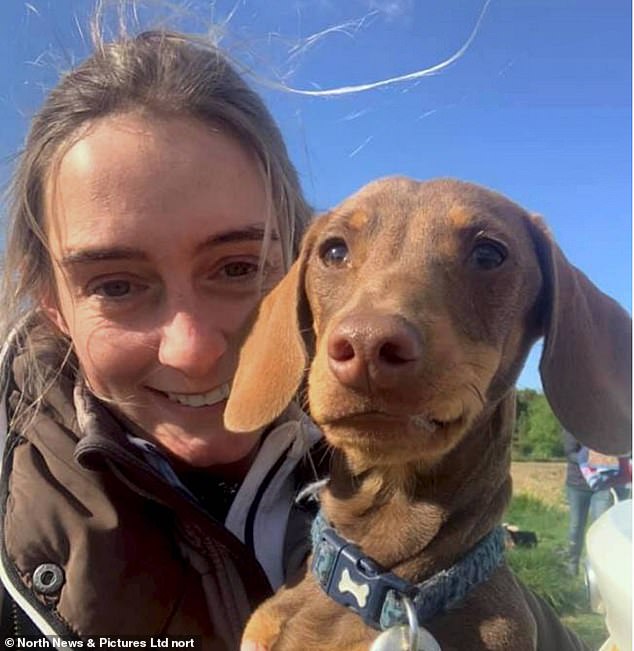 Fern says she ‘was hysterical with emotion’ when Floyd came back to her. She had not slept all weekend because she was so sick with worry

Ms Holmes, 32, said: ‘We were at the family farm and one of the dogs started barking and Floyd got frightened and took flight.

‘He did a lap of two of the fields, and the farm is 350 acres, and we were running after him.

‘Then he disappeared into an 80-acre oilseed rape field and at that point, I rang Doug.’

She appealed for help on Facebook and family, friends and members of the public joined the hunt over the weekend.

The breeders where the Darlington couple bought Floyd even brought over his parents to try to coax him out with their familiar scent, without success. 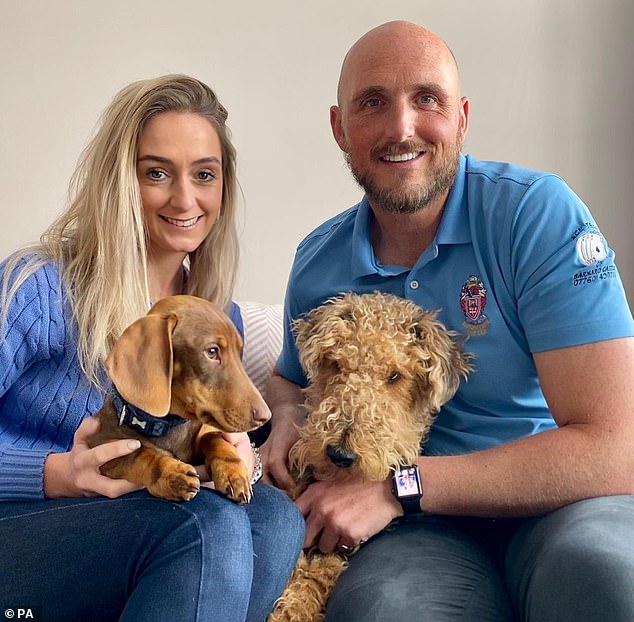 Fern Holmes, a finance and operations director for a multi-school trust, and Doug Dinwiddie smile with Floyd and Freida 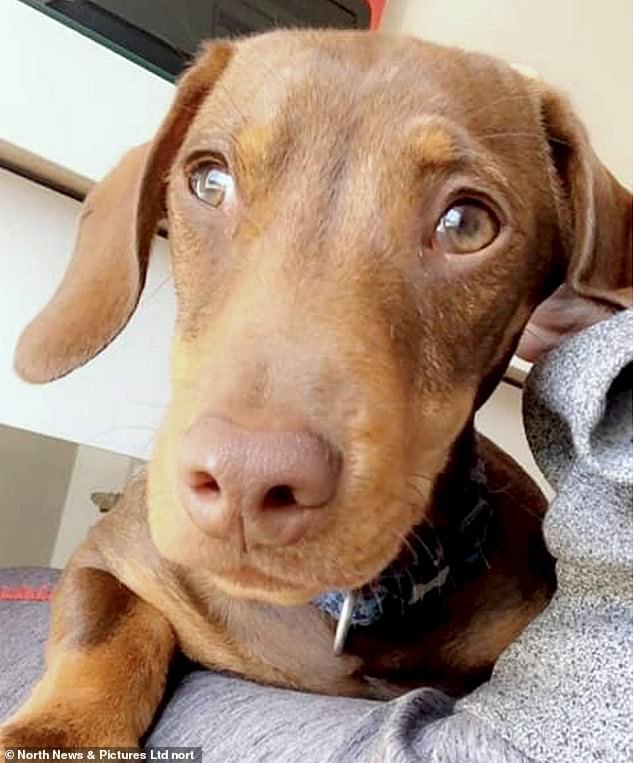 Mandy Butler, an expert from the Lost Dog Trapping Team on Facebook, said Floyd had gone into survival mode after being so frightened

People suggested they contact Mandy Butler, an expert from the Lost Dog Trapping Team on Facebook, who came over on Saturday to help them.

She advised that Floyd had gone into survival mode after being so frightened, and would not come if people were calling his name as he would still be terrified.

She lent them motion-cameras and a night-vision scope and was even considering sending up a drone.

With no sign of him by Monday morning, the couple thought he might have gone forever as they felt he was lacking the survival skills of less cuddly dogs. 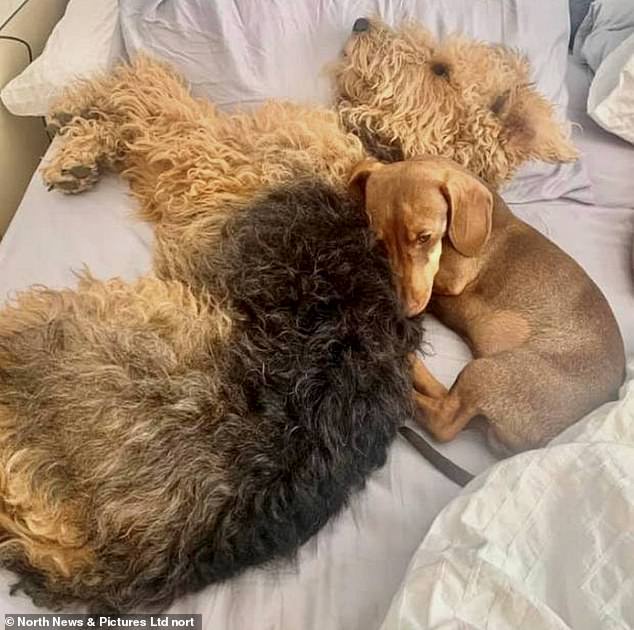 But a farmer caught sight of him in the field and another searcher confirmed she thought she saw the puppy, so everyone apart from his owners and their Airedale left the farm, waiting for Floyd to feel safe enough to come out.

Ms Butler advised them to cook bacon on disposable barbecues, open tins of sardines and leave trails of beef stock to lure him out and after three hours he did.

Ms Holmes, a finance and operations director for a multi-school trust, said: ‘You can see from the video I was hysterical with emotion.

‘I was so tired after no sleep all weekend, I just couldn’t quite believe my eyes.’ 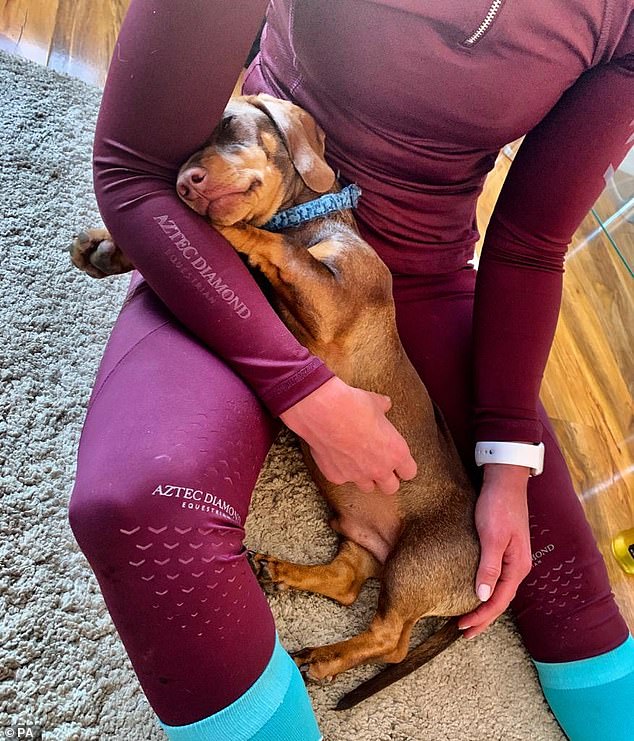 Her partner, who is managing director of the White Digital web design business, said: ‘We felt such relief.

‘He has got away with blue murder since. No-one tells him off anymore.’

The couple said Floyd was grubby but otherwise unharmed after his adventure, and they will now slowly build up his confidence again while walking with them.

They said they will also now buy a tracking device for his collar.