High-achieving LSE student, 19, is banned from roads after being caught twice the drink-drive limit while grieving over 10th anniversary of her father’s death

A high-achieving LSE student was banned from the roads after being caught over twice the drink-drive limit while grieving over the 10th anniversary of her father’s death.

Raphaelle Hoffman, 19, drove her five-door hatchback through two no-entry signs during an evening out with friends.

When police stopped her in Wilmslow, Cheshire, Hoffman claimed she did not notice the signs as she was ‘unfamiliar’ with the area.

At Stockport Magistrates Court the 19-year-old, who was awarded straight A’s at the £12,786-a-year Withington Girls School in Manchester, admitted drink driving. 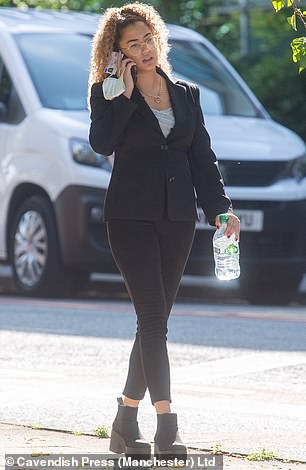 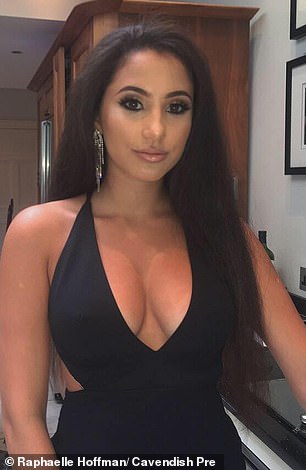 Raphaelle Hoffman, 19, pictured right and left, outside Stockport Magistrates Court, was caught more than twice the drink-drive limit during an evening out with friends in Cheshire

Hoffman cited mental health difficulties she was still experiencing due to the death of her father, who passed away in May 2010 aged 59, when she was just nine years old, and the recent passing of another relative.

The teenager, who lives with her family in a £1million house in nearby Altrincham, is studying International Social and Public Policy plus Economics at the London School of Economics and earns £30 an hour as a personal tutor.

The incident occurred on August 3 at around 11.45pm while Hoffman was spotted parking up outside the Rex Cinema in Wilmslow.

‘There were two females inside and the officers drove around so they’re in front of the car. The officer spoke to the defendant and she says that she’s not from the area and she was asked to come and take a seat in the police car.

‘She took part in a roadside breath test and when she does she fails and is then taken to the police Miss Hoffman has no previous convictions and is a lady of good character.’

Tests showed Hoffman had 81 micrograms of alcohol per 100ml of breath. The legal limit is 35 micrograms per 100ml.

In mitigation, defence lawyer Lisa Morton said: ‘She was cooperative on the breathalyser and on the procedure form it says she’s cooperative and very nervous. She’s 19-years of age and has no experience with the police or any such thing before or in her life. 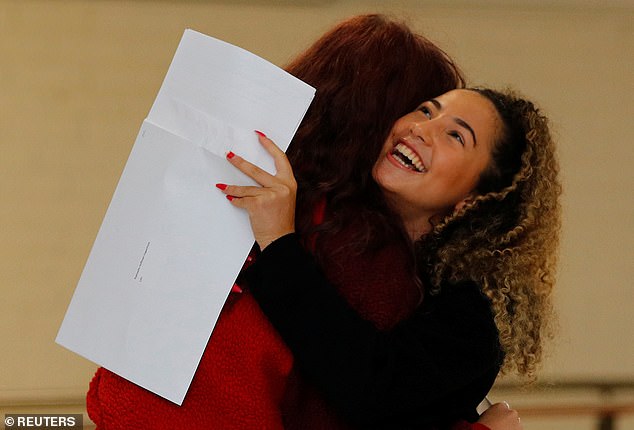 Hoffman, right, pictured receiving her A-Level results a Withington Girls’ School in Manchester last year. In an online profile she describes herself as a ‘highly driven student’

She is a student at the London School of economics and in the second year of her degree and is on a three year course and she also does a bit of tutoring to earn a little bit of money. Students are not particularly affluent and she’s trying to get some income to assist her in her studies.

‘She’s a young lady who has had some difficulties in life and at nine years of age her father passed away and it clearly had an impact on her mental health. It was the 10 year anniversary earlier this year and another family member who passed away who was her dad’s ex-wife who she treated as a member of the family was like an auntie to Raphaelle.

‘She died earlier this year a month away from her dads anniversary and her mental health has been deteriorating. There has been a prescription of some medication designed to assist but because of a combination of factors including the transfer of records and waiting lists difficulties and Covid-19 things have not gone quite as smooth as getting the medication. 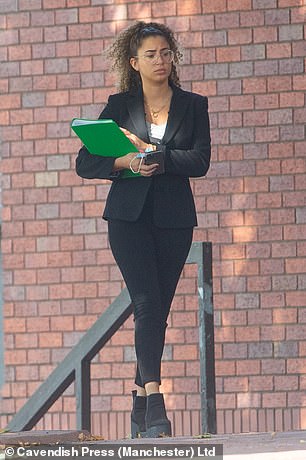 Hoffman pictured outside Stockport Magistrates Court, where she was disqualified from driving for 20 months

‘On this day she has gone out for a meal with a friend in an area which is not particularly familiar to her. The road we are talking about is a service road in front of a cinema there is parking spaces and she’s clearly driven the wrong way up that road and parked up the vehicle.’

She added: ‘The chance of her coming into contact with other road users was extremely low at that time of night and that time of year. She tells me that this was not a deliberate offence and she had no intention to come to the attention of the police.

‘She’s clearly very well thought of by the parent she is tutoring for it’s a great shame if that was to be removed from her. Loss of the driving licence is obviously mandatory but I do ask you to offer a driving rehabilitation course and keep the period of disqualification as low as possible in the circumstances.’

Hoffman was fined £120 and ordered to pay £119 in costs and surcharges which will be paid out of her student loan. She was disqualified from driving for 20 months and offered a place on a drink-drive rehabilitation course.

In an online profile she describes herself as a ‘highly driven student’ and Withington as the ‘best independent school in the North West.’