Home » World News » Macron admits to many mistakes, slamming Australia not one of them

Macron admits to many mistakes, slamming Australia not one of them

Paris: French President Emmanuel Macron, whose hopes of winning a second term face a growing challenge from a newcomer, said he has been humbled by the pandemic and by his mistakes.

But slamming Australia for breaking a $90-million submarine deal was not one of them.

In a 2½-hour interview with national television stations TF1 and LCI on Thursday, Macron said the Australian government behaved badly when it pulled out of the contract to buy the vessels from France. 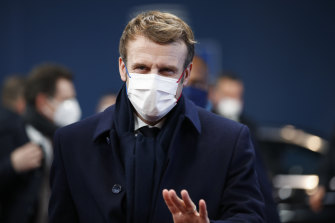 France had retaliated against the Australian move, and its response would continue to make itself felt for a long time, he said. He famously told this masthead last month that he knew Prime Minister Scott Morrison had lied to him.

His sharp tongue, combined with a very top-down approach to power, has upset many voters and cost Macron popularity. This could be a key obstacle to his re-election.

“I have learnt [from the pandemic], and I am more sensitive to some things than I was before,” Macron said, adding that it was clear French hospitals, for instance, needed help. 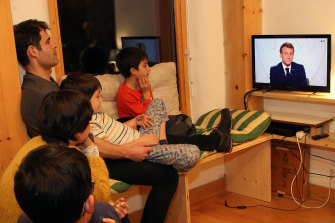 While opinion polls had long shown Macron easily winning a second mandate, that now seems less clear. He went out of his way to say he had learnt from his errors, for instance when he abruptly told a young unemployed man he would find a job if he just crossed the street and asked for one.

“I have sometimes been very harsh,” Macron said. “I have realised that we can’t change things without an infinite respect for each and every one.”

While he has not yet officially said he will run for a second term in April, and he again dodged the question, Macron has started a de facto campaign. He said in the interview he was as determined as ever to continue reforming France.

Macron, who had been a minister under Socialist president Francois Holland, ran in the last election as a political outsider who was neither of the left nor the right.

But during a presidency hit by social unrest over his pro-business economic reforms, his policymaking has drifted to the right, alienating some centre-left supporters.

“When I was elected, I loved France, and now I can tell you I love it even more madly. I love the French,” he said. “These five years have been five years of joy, of hard work, but also of crisis, of periods of doubt.”

The 43-year-old president, elected in May 2017, answered at length journalists’ questions in the sumptuous reception room of the Elysee presidential palace. The pre-recorded interview was broadcast in prime time.

To gain re-election, he needs to win some of his supporters back but also fend off a challenge from conservative rival Valerie Pecresse, who recent polls show has a shot at reaching the second round and beating Macron.

The new Les Republicains candidate who describes herself as describe herself as “one-third Margaret Thatcher and two-thirds Angela Merkel” had earlier protested to the state broadcasting regulator, saying Macron’s planned two-hour interview should count towards his campaign air time, The Times reported. 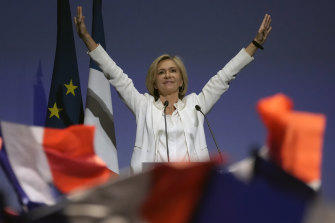 To convince the centre-right or conservative voters, he insisted he would continue with reforms – even if, he said, his pension reform may not be as drastic as initially planned.

But to reassure those more left of centre, he rejected the “president of the rich” label some gave him when he cut a wealth tax at the start of his term.

“Why were we able to protect [the vulnerable] during this [COVID-19] crisis? Because we had done the job because we had a credibility, a solidity, linked to the reforms of the labour market,” he said, referring to one of his most unpopular initiatives.