Children step off the train in Poland, tired, hungry, fleeing war in Ukraine — and then they're offered a lollipop or some chocolate by a Tyrannosaurus rex. Inside that costume is 41-year-old Tomasz Grzywiński, who went viral as he handed out goodies to refugees and is inspiring others to dress up and reach out.

It has been nearly a month since Russia began its invasion of Ukraine. The relentless attacks on civilian infrastructure have sent more than 3.5 million refugees fleeing into neighboring nations, the vast majority of them to Poland, according to the U.N. refugee agency.

"The kids need smiles," Grzywiński said. "They stay at the train station for like two days sleeping on the floor. It's devastating." 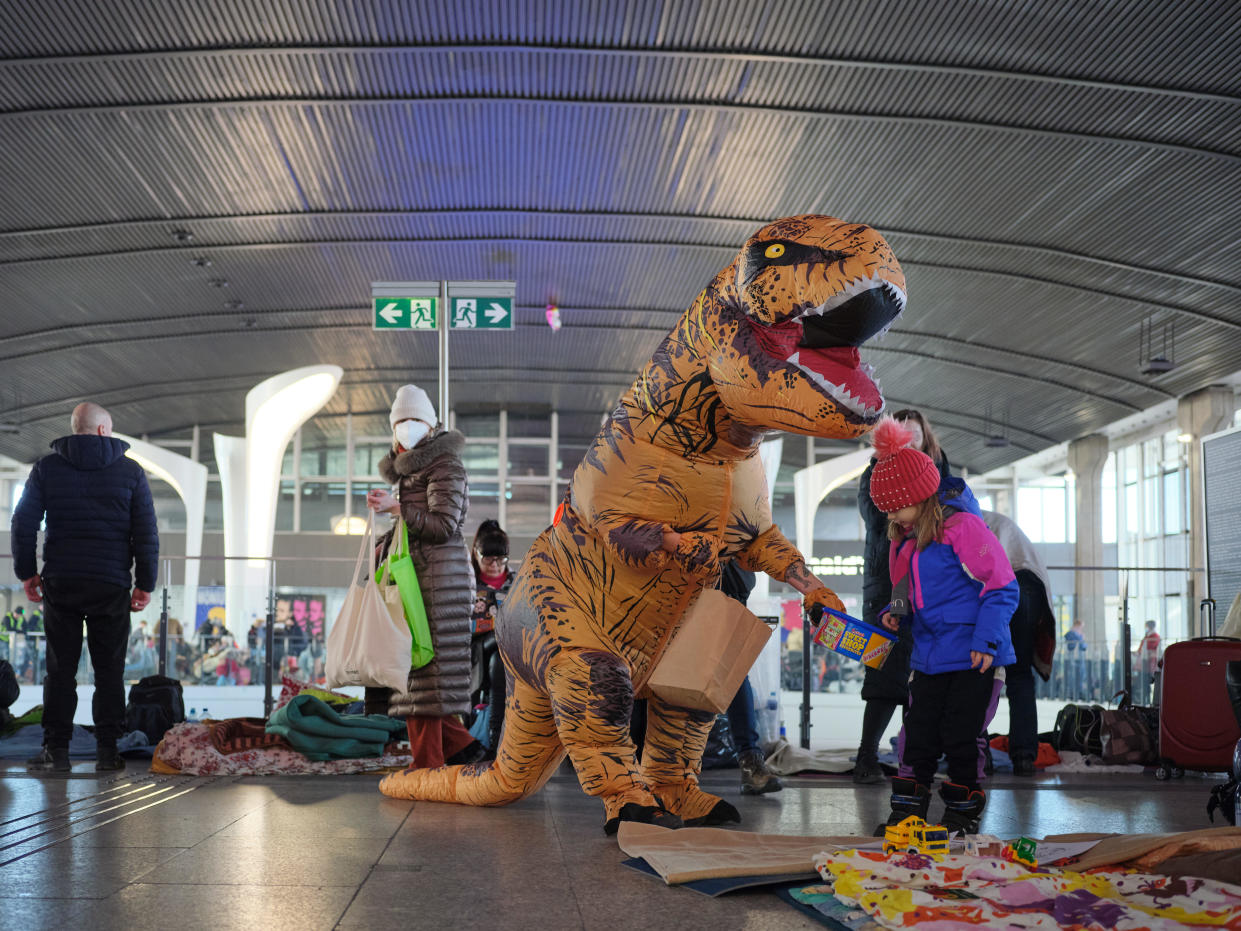 The father of three said he was helping a friend's family who needed a place to stay when he saw other families who had been traveling for days without food.

"Sandwiches is a good idea, so my 7-year-old, our friend, Weronika my girlfriend, all started making 100 sandwiches and we brought them all to the train station," Grzywiński says.

But it wasn't enough, so instead of marking more sandwiches, Grzywiński, his girlfriend Weronika and friends Karolina and Piotrek, came up with a plan to do more. The group decided to buy $100 worth of candy and head down to the train station for one hour, in costume, as a way to make the children he saw smile.

"Some of them run and grab the candies — how much they can grab and run away. Some of them, really scared to take one piece of chocolate and they look at me and say, 'Can I have It?' and I'm like, 'Come on, take more, take the lollipops or whatever you need," Grzywiński told CBS News. "It was deeply touching, I seriously started to cry for 10 minutes because of what I saw there, but luckily I'm in the costume and they don't see that." 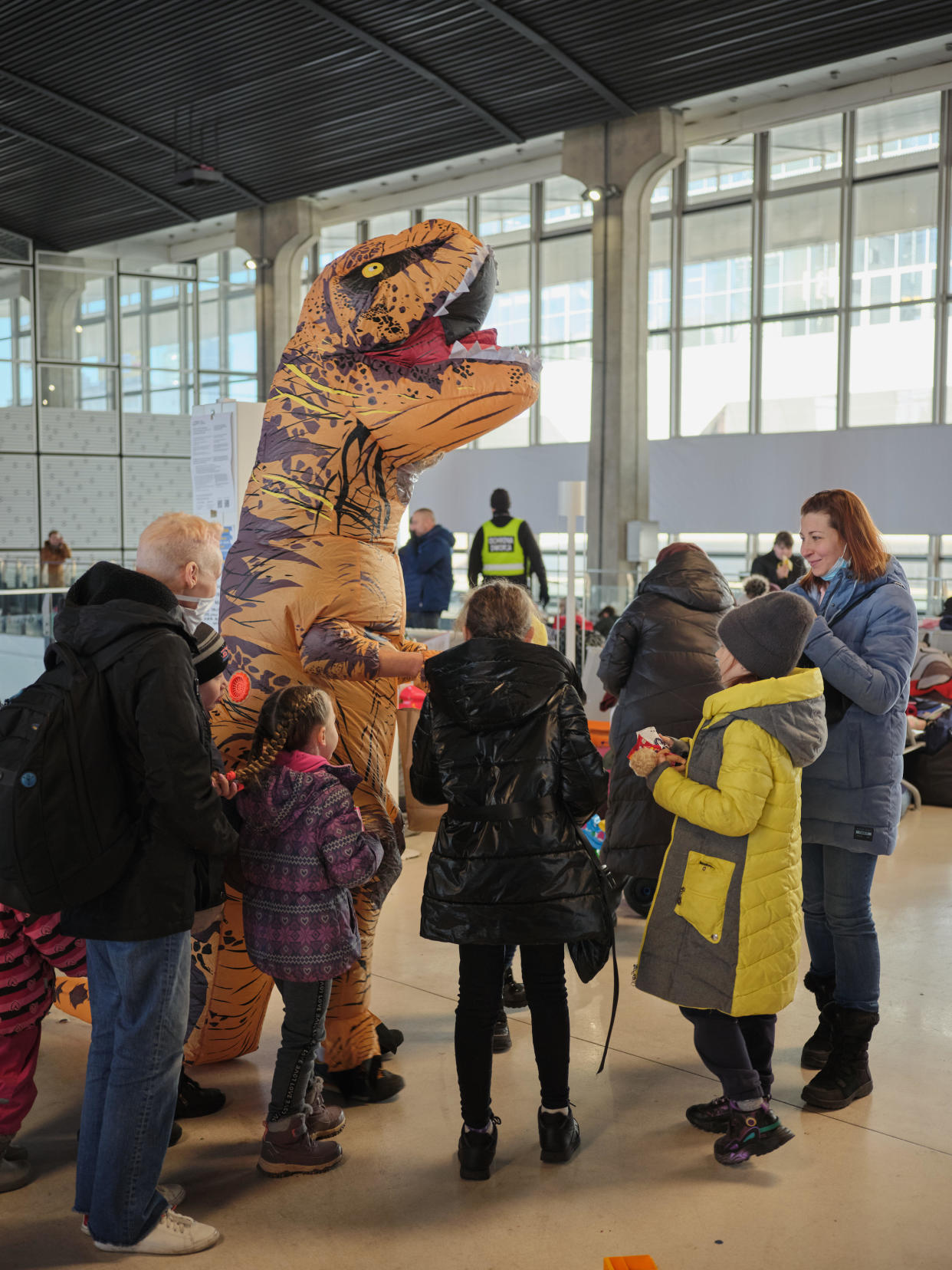 Grzywiński was recorded unknowingly and later learned he had gone viral on the social media platform TikTok. That's when he and his friends decided to set up a donation page where people he inspired began donating money, candy and other toys for the children.

"I can spend this money to buy them food for one day, or I can give them smiles and memories for a long time," he said.

Grzywiński said he's happy that he's seen others dress up in costumes at different train stations and refugee sites, bringing smiles to children. He hopes to continue to inspire people.

"I hope 100 dinos are going to go from every city and do it because the whole point is to get the kids to smile," he said. "Even this one moment for them could change the trauma and do something positive. There needs to be some positive news during this war."

As millions of refugees pour out of Ukraine amid the Russian invasion, individuals like Grzywiński are stepping up — and in many ways.

Grzywiński contacted the woman who took the viral video of him, thinking it was a volunteer also helping refugees. But when he learned the woman, named Sasha, was herself a refugee with two young children who fled Ukraine and were bouncing from shelter to shelter, he knew he had to take them in.

"I'm going to pick you up from the shelter — I call my mom, 'Mom do we still have a free room because there's a family and I really want to help them,'" he said. Now, Sasha and her children are staying with Grzywiński's family. 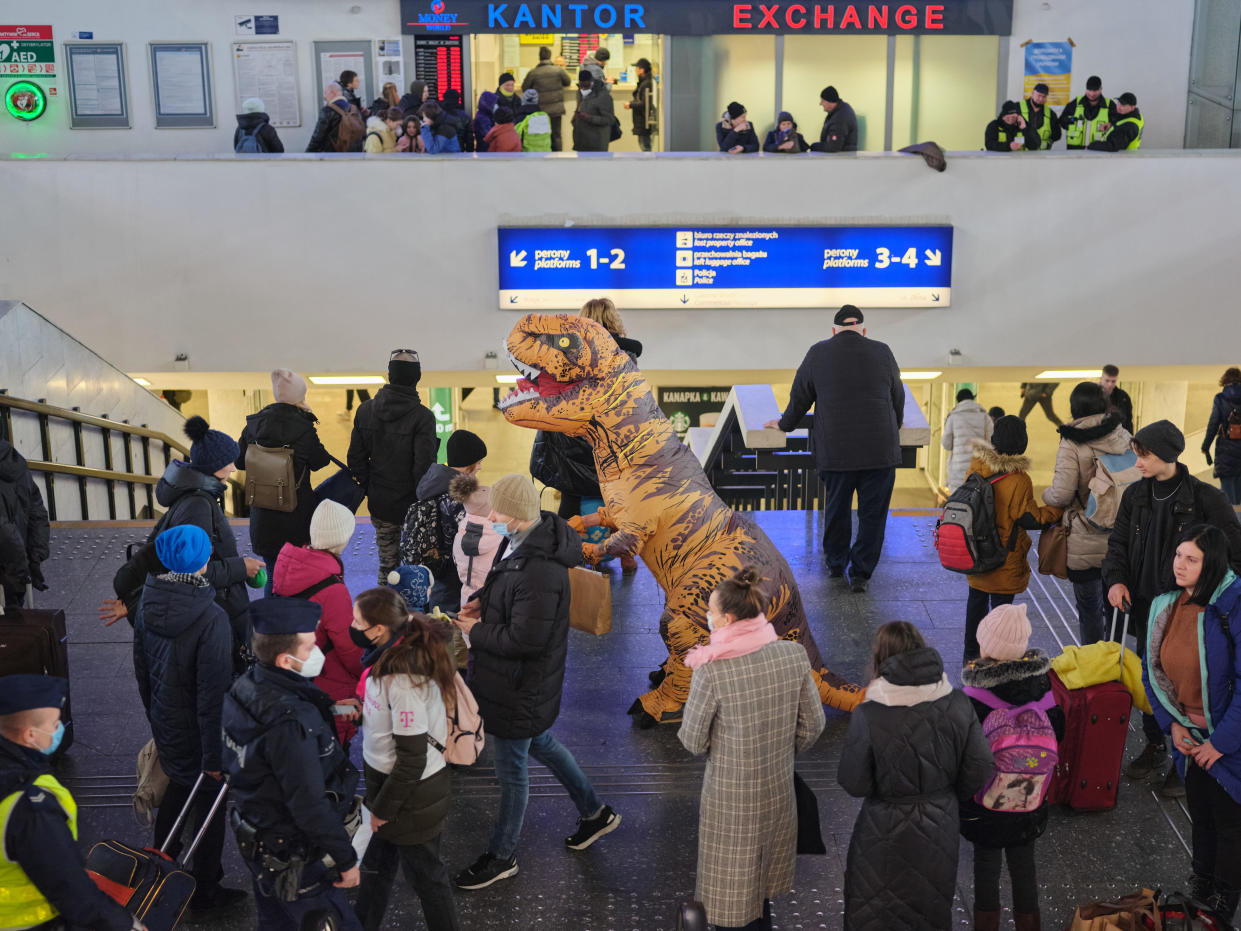