Man rips board member for 'shopping' during debate on Confederate name

A Baton Rouge activist has ripped into a school board member for allegedly shopping during a debate on renaming Lee High School, named after the Confederate general she defended for ‘freeing slaves.’

Gary Chambers, who was a candidate for the Louisiana state senate last year, called on Connie Bernard to resign at a school board meeting last Thursday.

‘I had intended to get up here and talk about how racist Robert E. Lee was, but I’m gonna talk about you, Connie,’ Chambers said as he brandished a photo he said he’d taken of her.

Bernard, who had wanted Lee High School to keep the name of the Confederate general, got up and walked out of the meeting as Chambers continued to berate her for being ‘horrible.’ 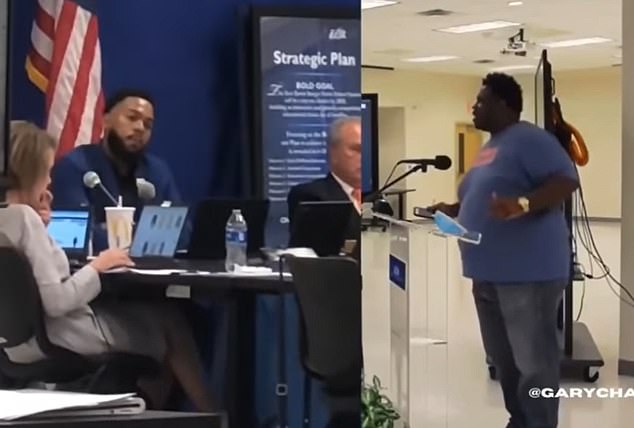 Gary Chambers, who was a candidate for the Louisiana state senate last year, called on Connie Bernard to resign at a school board meeting last Thursday

Bernard returned to the committee room a few minutes after Chambers’ pointed criticism, explaining that she had gone to use the bathroom.

According to WVLA/WGMB, Bernard had previously argued: ‘I would hope that they would learn a little bit more about General Lee, because General Lee inherited a large plantation and he was tasked with the job of doing something with those people who lived in bondage to that plantation, the slaves, and he freed them.’

But the school board, including Bernard, ended up unanimously approving that the name of the school be changed.

‘I understand where you were coming from in trying to recognize history but it’s just wrong, totally wrong. This man was a murderer, he was a racist and a bigot.’

In 2016, the school board had voted to remove ‘Robert E.’ from the school’s name while maintaining ‘Lee.’

Bernard was one of five board members who voted to maintain the name at that time, which was attributed to the strongly held feelings of her constituents. 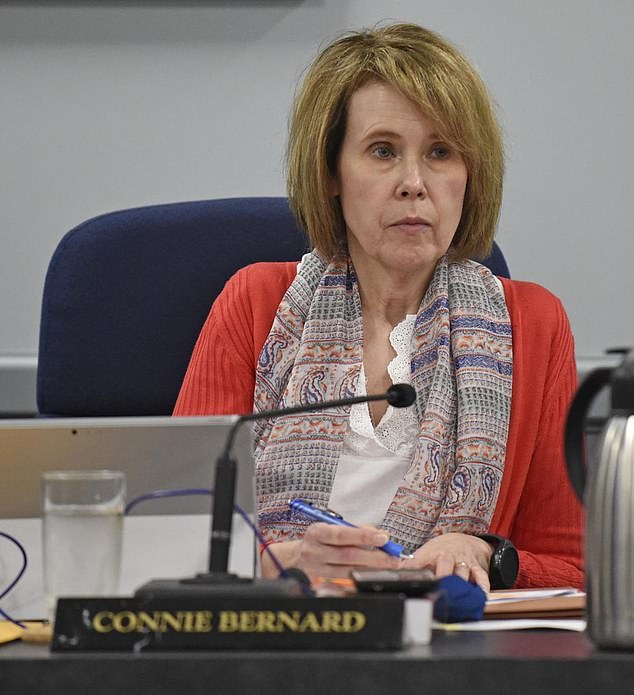 Bernard has since changed her tune, telling WBRZ: ‘My comments last week about the naming of Lee High School were insensitive, have caused pain for others, and have led people to believe I am an enemy of people of color, and I am deeply sorry.

‘I condemn racial injustice in any form. I promise to be part of the solution and to listen to the concerns of all members of our community. I stand with you, in love and respect.’

But Chambers is still calling for Bernard’s resignation and rejected her story that she was not shopping online.

Thursday’s vote paves the way for a special committee, made up of pupils, local people and staff, to convene and select alternative names.

The school board are seeking to have a new name by July 16. 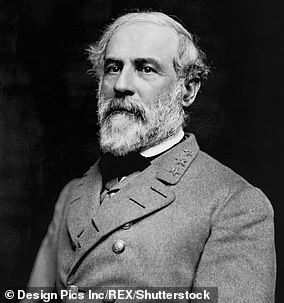 Robert E. Lee (pictured) inherited slaves from his father-in-law in 1857

Confederate general-in-chief Robert E. Lee fought in the Mexican-American War and spent three years as a superintendent at West Point, training some of the men who would later serve under him.

He owned slaves from the age of 22, when he inherited several families of black people after the death of his mother Ann Lee.

In 1857, his father-in-law left him 189 slaves who worked on the estates of Arlington, White House, and Romancoke.

The will provided that the slaves should be freed after five years, but Lee tried multiple times to resist this and keep the slaves under his control.

Although he was ‘not a pro-slavery ideologue’ according to one historian, Lee was known to use ‘violence typical of the institution of slavery’ and some slaves tried to escape his discipline. Some were recaptured and beaten on Lee’s orders.

He did not finally free the slaves until three days before Abraham Lincoln’s Emancipation Proclamation would have done so anyway.

Lincoln had offered Lee the command of Union forces in 1861, but Lee defected instead and became a general in the Confederate army.

Lee’s Army of Northern Virginia did battle with Grant’s federal troops in some of the defining battles of the war, which ended with Lee’s surrender at Appomattox Court House in 1865. Lee died in 1870.