A married policeman has quit the force after having sex with three women while on duty, a misconduct hearing has been told.

PC Richard Hosken-Johns is alleged to have had sex with two vulnerable women he met in his role as a police officer between September 2012 and January 2018.

He also had sex with a third woman and absented himself from duty to meet to have sex with them at their homes, the hearing was told.

Hosken-Johns is also alleged to have made false or disparaging remarks about colleagues to the women, calling them ‘b*******’ who were ‘trying to stitch me up’. 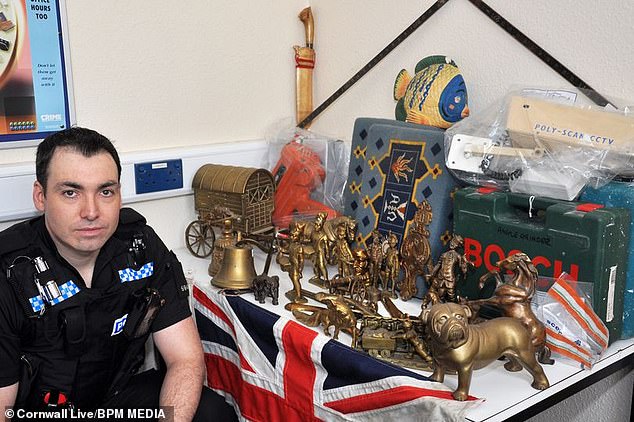 Former PC Richard Hosken-Johns quit the force after being accused of having sex with two vulnerable women he met through work. Pictured here with various brass trinkets and tools

And he told two of the women to lie if they were asked any questions about the relationships by investigators from the force’s professional standards department.

One of the women, called H, made a statement to the force in 2018 saying she had a consensual relationship with him and did not want to get him into trouble.

But she said: ‘Rich homed in on me and took advantage of me.’

She said they met four or five years ago when he came to her home to arrest her son who was in and out of trouble at the time and well known to police.

She said he got hold of her number somehow and started messaging her to meet for coffee.

He messaged her up to three times a week and she was feeling ‘low and lonely and wanted the company’.

She said: ‘He did come off duty, but most of them he was on duty and in a police car.’

She said her mother and sister warned her off him but ‘things snowballed’.

‘We did have a sexual relationship and would have some sort of sex most of the time he came around. I started feeling used.’

She said they never went out on a date and always went to her home – although he did ask her to go to his home once when the children were in bed so they could shower together – but she refused. 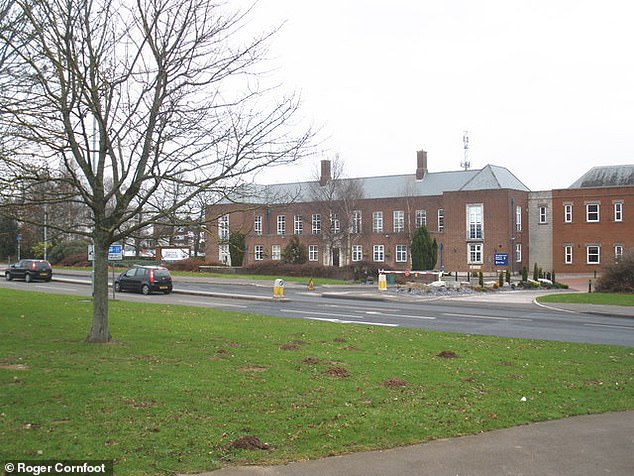 She also refused to do some sex acts and told him to have a cup of tea instead.

She said she felt he was taking advantage of her and so she refused to have sex with him – and he contacted her less and bragged he had a new girlfriend.

He later told her he had been suspended from duty, but would not say why, and told her to tell investigators to ‘f*** off’ if they turned up at her door.

She said: ‘Rich was taking advantage of me to get what he wanted….sex.’

A GPS of his radio gear revealed he had been to the area near H’s home on numerous occasions – and a number of them were when he had no reason to be there, with some visits lasting 90 minutes.

‘He has visited victim H for sex, simple as that,’ the panel was told.

After his suspension, he sent messages to H asking her to ‘deny everything’

‘They are trying to make out I abuse my position, which I do not.’

He said he hated the police and accused them of trying to ‘stitch me up’ and ‘they want to ruin my private life’.

The panel was told: ‘He was making false and malicious allegations about colleagues, alleging a malicious motive for investigating his misconduct. Nothing could be further from the truth.’

The hearing at the Devon and Cornwall force’s HQ in Exeter was also told he accessed the police computer system in relation to one of the women for a non policing purpose.

The hearing was told: ‘Richard Hosken-Johns has chosen not to attend today. He does not wish to engage and is not represented.’

The panel was told he resigned from the force and his last day was on Sunday and the hearing was told: ‘He denies those allegations.’

The former constable, who was based in Helston, Cornwall, is accused of breaching the standards of honesty and integrity; authority, respect and courtesy; orders and instructions; duties and responsibilities; confidentiality and discreditable conduct.

The panel was told the force’s policy was ‘crystal clear’ about not pursuing sexual or emotional relationships with victims of witnesses and that Hosken-Johns had ‘driven a coach and horses through this policy’.

The case is due to last three days and the panel has to determine whether the former officer committed misconduct, gross misconduct or neither.