Rachael Schilling became an American citizen just after the presidential election of 2016. She's a strong supporter of President Donald Trump and in the 2020 election will vote in Minnesota.

Her emphatic support of Trump has strained relations with her family in Queensland. They've had big fights; they still speak, but not about politics. 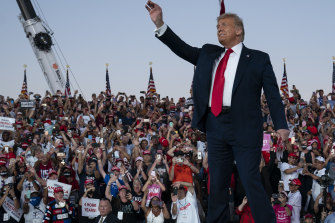 Caroline Padbury is a Melburnian living in Florida. She grew up in Australia and her family were supporters of the Liberal Party. For the past two decades she has voted for the Democrats and believes they're the American equivalent of the Liberals. Due to its size, Florida is a critical state in this election.

After living in Australia for 25 years, Republican Jim Vincent became a US citizen in 2000. In 2016 he voted for Trump. This election will be the first time he has supported the Democrats, casting his vote in Michigan.

Carol Croce is from Wisconsin and is a member of Democrats Abroad living in Canberra. In voting for former president Barack Obama twice, she realised what it meant to truly believe in a candidate.

Caryn Kakas is a Pennsylvanian living in Melbourne who isn't affiliated with any political party. She thinks this election is reflecting the worst of politics on both sides. 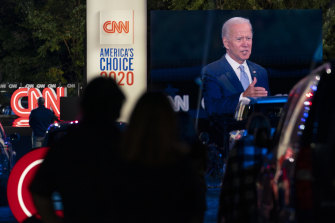 Sydneysider Steve Van Sluyter doesn't align with either party and was unimpressed with the Obama administration. But he views the Republican Party as "power-hungry nihilists" and will vote for the Democrats in North Carolina.

After 18 years in the US, Leo Van Veldhuizen lodged his dual citizenship application in Arizona so he could vote against Trump in 2016. He left it a little too late and his citizenship came into effect on the same day the President was inaugurated in 2017. This year, he's not letting anything stop his vote for the Democrats.

In hearing their stories, two themes about the dual-citizen vote emerge. Most votes will be decided by the candidates' personalities, not their policies, and the coronavirus is having a clear, though complicated effect, on the Australian-American vote.

The notion of "voting for the lesser of two evils" is dominating sentiment as November 3 draws closer. All seven dual citizens spoke more about the person they were voting against than the one they were voting for. 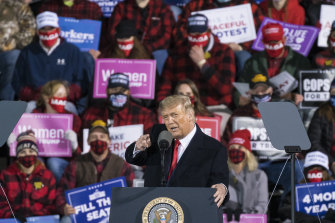 Despite working for many years in public policy, Croce is adamant that this election is about "beating Trump", and is bigger than policy. Croce has been disillusioned with the Democratic Party's inability to let in "new voices" but believes Biden is the right candidate to motivate disengaged Democrats who supported Trump in 2016, as well as traditional Republicans who believe Trump has "turned their party into a disaster".

For Republican Jim Vincent, the most important issue is the character of the President. In 2016 he voted for Trump. Although still a Republican at heart, he wouldn't vote for Trump again. Vincent is not particularly enthused by Biden and has never before voted for the Democratic Party, but he believes Trump has "proven himself to be dishonest and numb to the concerns of the people".

Kakas understands why the rhetoric is all about the candidates' character. "It's difficult to be a staunch party affiliate at a time like this," she says. "We're seeing the creation of divisions based on hate, mistrust and inequity that's forcing us into a position where we voters are not engaging in policy but are instead engaging in fear and hatred."

This election marks the death of party values, she says.

The layered effect of the coronavirus 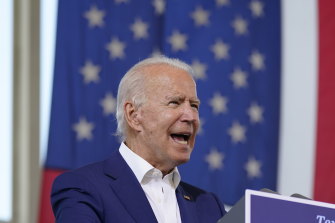 To complicate matters further, the pandemic has meant that for the first time at least three-quarters of all American voters can cast their votes by mail. Electoral officials are predicting about 80 million mail ballots will flood election offices, more than doubling the number of postal votes from 2016.

While well-staffed states' results are predicted to be called on election night, experts are worried that counting in swing states with less flexibility may take days. In North Carolina, the State Board of Elections said ballots postmarked by November 3 would count so long as they are received within nine days after the election. Pennsylvania Supreme Court has decided ballots postmarked on or before election day will be counted so long as they arrive within the next three days. For Wisconsin, federal judge William Conley ruled ballots will count if they are received within six days of November 3.

If upheld, these developments could mean more votes are counted in the swing states, but they may also cause a longer wait for the official result.

Croce believes Trump, if unsuccessful in his bid for a second term, will not go quietly, and she is thankful to be in Australia. "There's a level of violence and aggression that is currently kept at bay because their guy is at the helm … when he's gone, all bets are off and it's scary," she says. 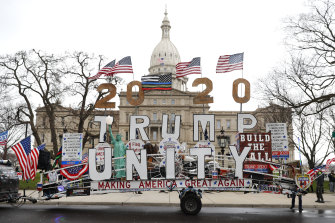 Trump supporters in Michigan who protested against lockdown restrictions, mask wearing and other public health measures to stop COVID-19.Credit:AP

Van Veldhuizen says it was only a matter of time before the President tested positive for COVID-19 due to his refusal to wear a mask. Still, he hopes Trump recovers, because this election is "already somewhat chaotic".

Journalist Bob Woodward exposed Trump for actively playing down the severity of the coronavirus, but Van Veldhuizen doesn't think it will lose him the election.

"It won't make a hoot of difference. In his own words, the man could shoot someone on Fifth Avenue and it'd be fine with his supporters," he says.

It was the President's handling of the coronavirus pandemic that pushed Jim Vincent – currently stranded in America due to the COVID-19 crisis – to vote for the Democrats.

"The character of Donald Trump has been shown in his refusal to take responsibility … I could have forgiven him for bad-mouthing the veterans or thinking Wall Street was the economy, but bringing tragedy to 200,000 homes? That is just not OK," he said, close to tears.

"I just want to come home," he added. His flight is in December.

Our weekly newsletter delivers expert analysis of the race to the White House from our US correspondent Matthew Knott. Sign up for The Sydney Morning Herald‘s newsletter here, The Age‘s here, Brisbane Times‘ here and WAtoday‘s here.