Tunnelling on some sections of the $11 billion Metro Tunnel is running up to seven months late, with one tunnel-boring machine now on its way to the State Library station scheduled to have arrived two months ago. 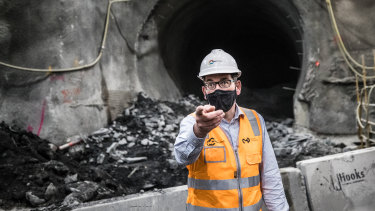 A confidential state government review of the Cross Yarra Partnership Consortium's (CYP) September 2019 draft program reveals the Andrews government pressured the consortium to deliver the project on time after CYP warned of a 15- to 18-month delay.

The consortium had forecast a $3.3 billion cost blowout months before it switched off the project's tunnelling machines in a public demand for more cash, according to separate internal government documents exposed by The Age last week.

CYP also tried to secure $300 million in extra profit on the project's blown-out costs, increasing its $500 million profit by more than 56 per cent, the documents revealed.

Setbacks in the project's tunnelling schedule contributed to the projected time overruns, including a three-month delay in concrete segment production and delays in building a concrete base at Arden station, the fresh Rail Project Victoria (RPV) document reveals.

The tunnel-boring machines were delivered by early March last year, but the pre-cast facility in western Melbourne only began full-scale segment production — which was needed for tunnelling — two months later.

"There is a clear delay of TBMs [tunnel-boring machines] commencement of up to 3 months for TBMs 1 and 2," RPV warned in its review.

Two tunnel-boring machines were set to arrive at State Library station in September and October this year, but they are both still on their way to the city station. They are not expected to arrive until February and March next year – more than four months after the expected date.

The massive excavators are also not expected to be extracted from Arden station until August and September next year — about seven months behind the scheduled date.

It follows warnings in mid-2019 that tunnelling was running at least four months late on the project due to the late arrival of the first of the machines from China, which was still being assembled months after it was supposed to start digging.

Despite evidence of a tunnelling delay and multiple warnings by CYP – a consortium comprising Lendlease, John Holland, Bouygues Construction, John Laing and Capella Capital – the Andrews government insists that the project would be delivered on time.

A spokeswoman said crews had made remarkable progress on tunnelling during the COVID-19 pandemic, and half the project's tunnelling had been finished in September.

"While the pandemic brought Melbourne to a standstill, Metro Tunnel workers have been making significant progress on the ground across all worksites with more than 50 per cent of tunnelling now completed on the project.

"The Metro Tunnel is on track to be completed by 2025 – a year ahead of schedule."

RPV pushed back on CYP's projected delays in its review, arguing they had not been agreed to by the state government or an independent reviewer.

CYP admitted to an error in its construction program in 2018, with the time taken to finish a section of the works being under-estimated in the contract by six months, the document alleged.

RPV said there were "numerous opportunities" to save time on the project, and ideas first proposed by CYP during the tender process "have since been overlooked".

Using tunnel-boring machines instead of roadheaders to tunnel beneath the city centre was proposed as a time-saving measure, along with changes to worker shifts and construction sequencing, despite this adding complexity and additional construction requirements, the document stated.

The Sydney project took six years to build — one year faster than the Metro Tunnel — despite being a longer link than Metro's nine kilometres and including four at-grade stations and a stabling and maintenance facility, which are not being built as part of Melbourne's Metro.

"While there are significant differences between the projects, Sydney Metro Northwest provides a helpful point of reference for the purposes of assessing CYP’s program, including by demonstrating that it is possible to overcome delays (in fact, the PPP package for Sydney Metro Northwest faced delays far more significant than those encountered by CYP to date)," RPV stated.

Despite initially refusing to bow to the demands for extra money on the project, the Andrews government agreed in June to pay more than $1 billion under an in-principle agreement struck with CYP in June. The government has not confirmed how much extra was paid.

"This is an enormous amount of money and other projects will be lost and compromised because the state government has squandered this money through their poor management," Mr Davis said.