Millions of hectares of forest have grown back since 2000

Tbilisi: From Mongolia to southern Brazil, forests big enough to cover France have grown back during the last 20 years, but the gains did not make up for losses elsewhere.

An analysis of satellite data by a team of researchers led by the World Wide Fund for Nature (WWF), a conservation group, reveals that almost 59 million hectares of forests have regenerated since 2000.

That much forest has the potential to absorb 5.9 gigatonnes of carbon dioxide (CO2) – more than the annual emissions of the United States, according to the study. 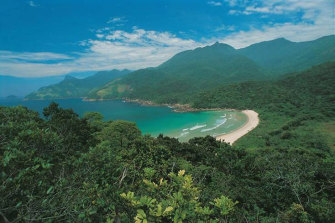 Part of the Atlantic Forest in Brazil.

“The data show the enormous potential of natural habitats to recover when given the chance to do so,” said John Lotspeich, executive director of Trillion Trees, the coalition of environmental groups behind the study.

“But it isn’t an excuse for any of us to wait around for it to happen”. 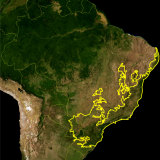 The yellow line encloses the Atlantic Forest  — in Brazil, Argentina, and Uruguay — as delineated by the WWF. The Amazon rainforest is top left.Credit:NASA/Miguelrangeljr

The research looked at forests that have grown back spontaneously or with little human help, such as planting native trees or fencing off land to reduce grazing.

“We’ve known for a long time that natural forest regeneration is often cheaper, richer in carbon and better for biodiversity than actively planted forests,” said William Baldwin-Cantello, director of nature-based solutions at WWF-UK.

“This research tells us where and why regeneration is happening, and how we can recreate those conditions elsewhere.”

The study found the Atlantic Forest in Brazil regained an estimated 4.2 million hectares — an area roughly the size of the Netherlands — since 2000, something it described as a success story.

Over the same period, 1.2 million hectares of boreal forests were regenerated in northern Mongolia, with other reforestation hotspots including central Africa and Canada, it said.

Still, the authors said such “encouraging signs” could not be taken for granted, warning the world was still losing forests at a “terrifying rate”, much faster than that of restoration.

Brazil’s Atlantic Forest was still only about 12 per cent of its original size and needed to more than double to reach what the researchers said was the minimal threshold for lasting conservation.

Overall, separate research has shown that 386 million hectares of tree cover – an area more than seven times larger than that of naturally regenerated forest identified in the study – has been lost globally in the past two decades.

“If we give forests the space […] to regenerate at scale, and if we create that space, and we ensure that last into the future, then this is going to play a major role in avoiding climate change,” Baldwin-Cantello told the Thomson Reuters Foundation in an online call.