A minister dramatically quit today after a sleaze report found he abused his status as an MP in a dispute between his father and a company.

Conor Burns resigned after the Commons Standards Committee said should receive a seven-day suspension from the House for deploying his position as an intimidation tactic.

The Parliamentary watchdog found Mr Burns – a close ally of Boris Johnson – broke rules by writing to an individual connected with a company that was in dispute with his father over repayment of a loan.

In the letter, he referred to his status as an MP, stating ‘my role in the public eye could well attract interest especially if I were to use parliamentary privilege to raise the case’.

A Downing Street spokesman: ‘Conor Burns has resigned as Minister of State for International Trade following a report from the Parliamentary Commissioner for Standards.

‘A replacement will be announced in due course.’ 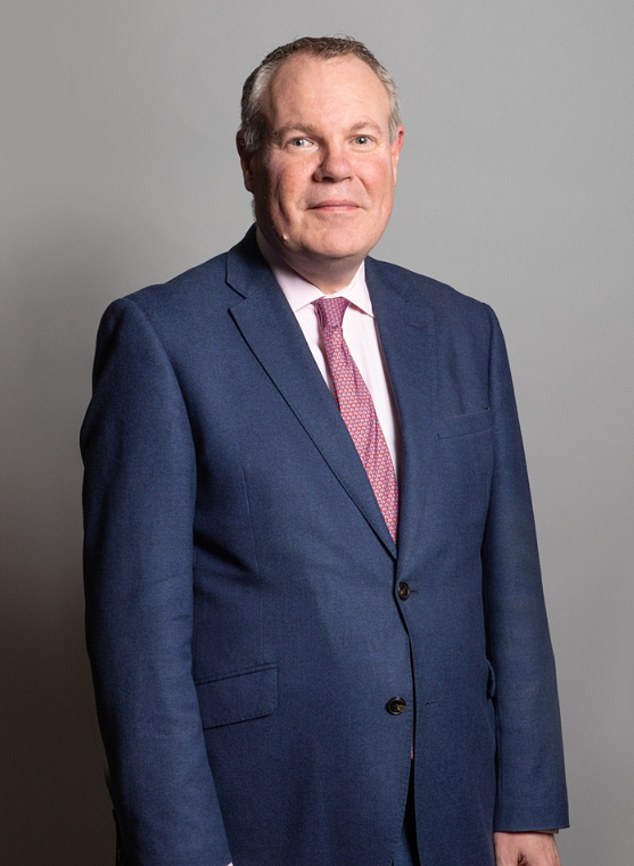 Mr Burns tweeted today that he was resigning from government with ‘deep regret’, and the PM would continue to have my ‘wholehearted support’.

Standards commissioner Kathryn Stone concluded that Mr Burns ‘put personal interest before the public interest by suggesting that he would take advantage of his public office to pursue his father’s financial dispute’.

The report also accused Mr Burns of behaving ‘disrespectfully’ during the investigation, saying his behaviour ‘gives fuel to the belief that Members are able and willing to use the privileges accorded them by their membership of the House to benefit their own personal interests’.

In evidence to the committee, Mr Burns said: ‘I absolutely should not have written to the complainant in the terms I did or used House stationary to do so.’

The cross-party committee recommended that Mr Burns should be suspended from the House for seven days, and apologise in writing to the Commons and to the individual concerned – something that will need to be rubber-stamped by MPs.

‘The right of Members of Parliament to speak in the Chamber without fear or favour is essential to Parliament’s ability to scrutinise the Executive and to tackle social abuses, particularly if the latter are committed by the rich and powerful who might use the threat of defamation proceedings to deter legitimate criticism.

‘Precisely because parliamentary privilege is so important, it is essential to maintaining public respect for Parliament that the protection afforded by privilege should not be abused by a Member in the pursuit of their purely private and personal interests.’

The report said: ‘The committee considers that Mr Burns’ abuse of his privileged status in an attempt to intimidate a member of the public calls for a sanction more severe than apology.

‘It recommends that Mr Burns should be suspended from the service of the House for seven days.’