Business minister Nadhim Zahawi’s sister was saved from the Beirut horror blast – by nipping to the loo moments after being on the street just 500 yards from the warehouse where 2,750 tons of ammonium nitrate exploded

The sister of Business Minister Nadhim Zahawi escaped death in the Beirut chemicals blast – because she had popped to the toilet, she revealed last night.

Moments earlier, Jihan Zahawi had been on the street outside her shop just 500 yards from the warehouse where 2,750 tons of ammonium nitrate exploded.

‘I was saved by God,’ the mother-of-five told The Mail on Sunday. ‘It sounds crazy, but what saved me from death is that I went upstairs to the toilet. Otherwise, I would have been cut into pieces, shredded.’

The explosion on Tuesday killed at least 158 people, including more than 40 in the district where Ms Zahawi runs a handicrafts shop. 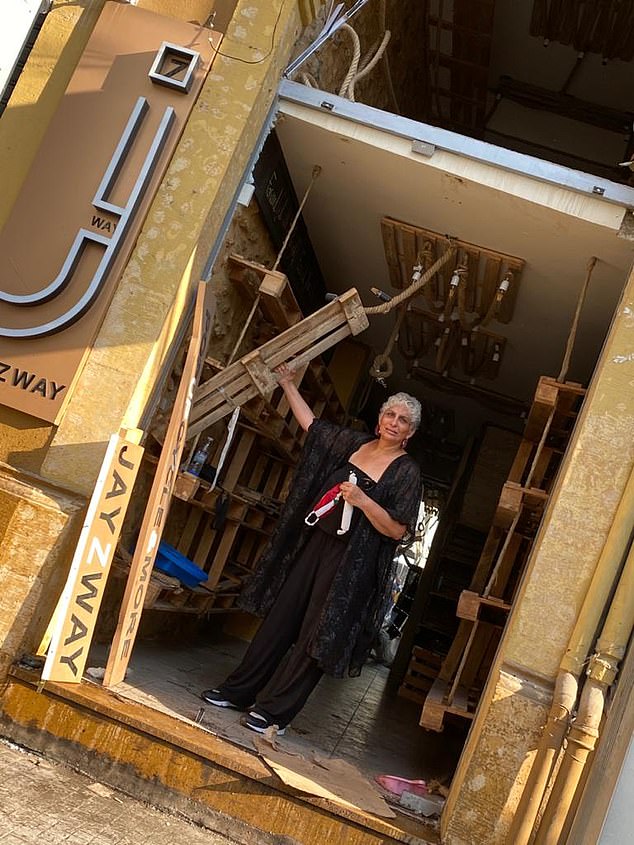 Moments earlier, Jihan Zahawi (pictured in the doorway of her shop) had been on the street outside her shop just 500 yards from the warehouse where 2,750 tons of ammonium nitrate exploded

She told the MoS she had taken a break from handing out cups of mint lemonade to people passing her shop when the blast wave tore through the city.

‘If you look out from my shop you can see straight down to the sea and the port,’ she said.

‘I was here on Tuesday with my assistant Welma and my driver Samir, when we noticed the smoke rising from the initial fire.

I walked away to take a short break. I went upstairs, leaving Welma outside with our fresh lemonade, then bang.’

Ms Zahawi, 51, lost consciousness and awoke to a scene of devastation. Samir, who had been knocked off his feet by the blast, rushed to Ms Zahawi’s aid and led her outside, where they found a bloodied Welma.

‘There were cuts and blood all over her face and she said she couldn’t see,’ Ms Zahawi said.

In the block of flats across the road from Ms Zahawi’s shop, a couple fell to their deaths as their balcony collapsed.

Ms Zahawi’s husband, Elie, drove into the city from their home in the mountains above Beirut and took her and Welma to hospital.

Ms Zahawi received stitches to a head wound and Welma’s sight returned after her eyes were washed by medics.

Ms Zahawi, who is from a family of Kurds who fled Saddam Hussein’s regime in Iraq for Britain in 1978, later returned to her store.

‘When my husband saw what was left, he said, “Jihan, this is miraculous. I can’t believe you’re alive.”’