A single mother claims she was told by a security guard to leave her seven-year-old son at the entrance to a Morrisons supermarket due to ‘coronavirus rules’.

Alexa Bowyer, 39, and son Ted visited the store in Hookstone Chase, Harrogate, on Wednesday to spend the lunch vouchers they had received from his school to help during the lockdown period.

But Miss Bowyer said she ended up leaving the store without food and with her son in tears after she was made to feel ‘like a criminal’ by the ‘bullish’ security guard. 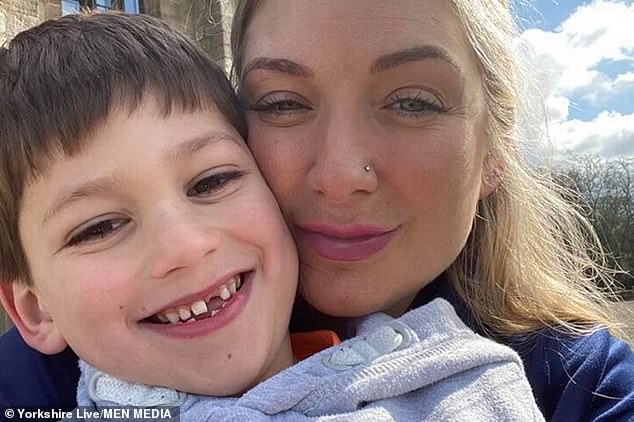 Alexa Bowyer, 39, and seven-year-old son Ted (pictured) visited the store in Hookstone Chase, Harrogate, on Wednesday to spend the lunch vouchers they had received from his school to help during the lockdown period

Miss Bowyer had arrived at lunchtime and queued outside the store.

But when she reached the entrance a member of security, who she said she had recognised from visiting the supermarket over the years, told her that she could not take her son inside with her.

She claims that he told her it was store policy and reasoned that by taking her son inside she was increasing the chance of him contracting coronavirus.

The guard instead suggested that she leave him outside on a bench by the entrance.

Miss Bowyer said: ‘I laughed because I thought he was joking. I thought “Of course he’s joking”.

‘Another security guard said he can’t come in and I thought “He’s a child. There’s no way I can leave him outside”.

‘I told them it was ridiculous. I’m sure they’d just made it up on the spot…’

‘I said I wasn’t going to do that and they said to come back without him.’

Miss Bowyer said that she was eventually forced to leave her son with a man she knew from a church group who had appeared by chance and offered to watch Ted while she shopped.

Miss Bowyer went inside and was soon approached by another member of staff who saw her looking distressed.

Miss Bowyer said: ‘I told her what happened and she came out to the front door with me.

‘She asked the security guard and he just said: “Mum’s choice.”

‘If it was my choice he would have come round with me!

‘He told the store assistant that she had not been briefed and it was a new policy.

‘She said that if it’s a new policy I can’t do anything.

‘I put my basket down and left with my son. We didn’t get any lunch.’ 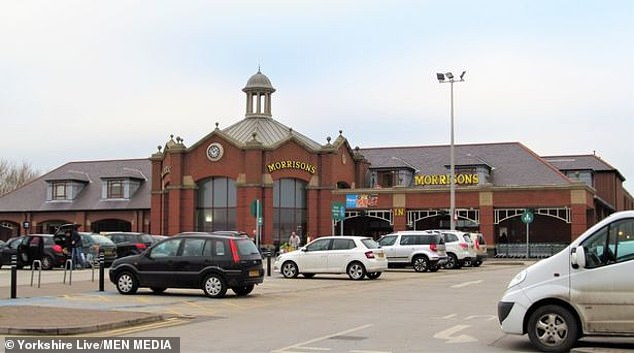 Miss Bowyer later spoke to the manager of the store he confirmed that this was not part of Morrisons policy. Pictured: Morrisons in Harrogate

She added: ‘It just left us really down. I rang the manager when I got back because I was really upset.

‘I should’ve asked to speak to the manager at the time but I was so shocked with what happened I was not thinking straight.

‘The way he spoke and the way he handled it. It was like I was a criminal.

‘I get that he’s security and he’s got to monitor what’s going on but you can still be nice about it. It was though he was on a power trip.’

Miss Bowyer later spoke to the manager of the store she confirmed that this was not part of Morrisons policy.

She was invited back by the manager later that day and arrived when neither of the security staff from earlier were working.

Miss Bowyer added: ‘It’s not Morrisons I’ve got a gripe with but with the security who handled the situation…

‘I said “You need to rein in your security men because that is not cool. People can’t be treated like that”.

‘[The manager] was very apologetic and said she was going to have a word with the relevant security people.’

Miss Bowyer added: ‘I get that people are panicking but use your discretion.

‘Ideally I wouldn’t be taking my son to supermarkets but can you get deliveries at the minute? Can you travel distance? No.’

Miss Bowyer that she did not feel comfortable going back to the store in future but would continue visiting to show she had not been ‘intimidated’.

A spokesperson for Morrisons confirmed that it was not part of their store policy and that Miss Bowyer had since received an apology from the management.