Mum's anguish as footy-mad schoolboy, 11, dies suddenly in his sleep

A FOOTBALL mad schoolboy who tragically died suddenly in his sleep has been described by his mum as having a "heart of gold".

Alfie Humphreys, from Cheshire, was found dead by his heartbroken mum Nicola Whitfield on Friday as she desperately tried to wake him up. 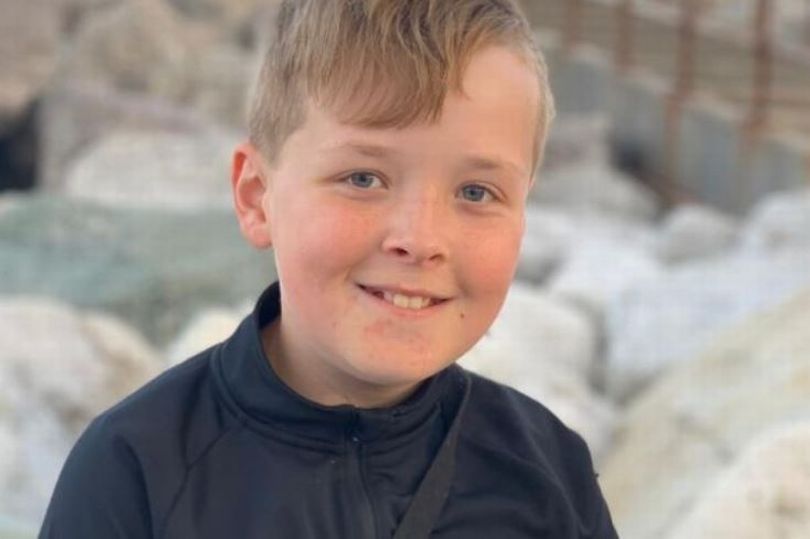 It is unclear at this stage what caused the 11-year-old's death, reports Cheshire Live.

His mum, Nicola, described promising footballer Alfie as her "best friend" in a touching tribute.

The 35-year-old, of Widnes, said: "He was such a lovely boy and he had a heart of gold, and I know everyone says that about their children, but he would have done anything for anyone, especially me.

"He'd have done anything for me, absolutely anything.

"He was my best friend."

Everton-fan Alfie had started secondary school last September, and his mum said he was "coming out of his shell" as he made new friends and settled in.

Nicola and Alfie's dad Wayne Humphreys, 43, have been left devastated by his death, as has his step-dad Harry Pierce.

Alfie was an older brother to siblings Dylan, Charlie, Riley and Jamie – who Nicola says he "absolutely doted on".

"He couldn't do enough for them," she added.

"He used to always come down and play-fight with them." 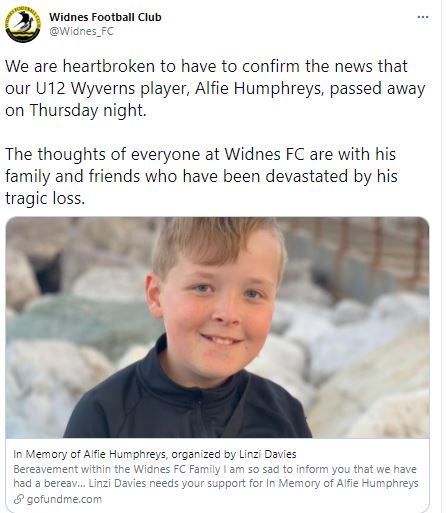 Described as "kind-hearted" by his family, the Ormiston Chadwick Academy schoolboy was a keen footballer who played for Widnes FC.

The club has described his death as a "tragic loss".

A tribute from Widnes FC posted on Twitter said: "We are heartbroken to have to confirm the news that our U12 Wyverns player, Alfie Humphreys, passed away on Thursday night.

"The thoughts of everyone at Widnes FC are with his family and friends who have been devastated by his tragic loss."

Step-mum Lisa Barton said Alfie was a "massive Everton FC fan" and was always playing football with his friends.

"He's played football since school, but even in pictures of him as a toddler he had a football," the 34-year-old added. "He loved playing football."

She added: "I've asked all my neighbours to put flags out for him, he absolutely adored the club."

A fundraising page has since been set up by Linzi Davies on behalf Widnes FC to support Alfie's family with funeral costs.

Writing on the GoFundMe page, Linzi said: "The whole of the close-knit Widnes FC family is shocked and saddened.

"Alfie was an integral part of the U12 Wyverns team and above all else a friend. His loss has sent shockwaves through us all.

"In true Widnes FC spirit, we know we will all come together as one, like we have always done, to show our love and support for an amazing young footballer and his family.

"Our thoughts and love go out to everyone close to Alfie at this incredible sad time."

Nicola has said she is "overwhelmed" by the support the family has received.

She added: "I cant believe the support I've had, it's just been amazing."